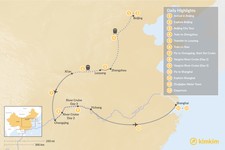 Experience the ancient capitals of China, regarded as the cradles of Chinese civilization. You'll also explore the longest river in Asia on a luxurious river cruise which takes you to one of the world's largest dams. This tour is a great balance of history, breathtaking views, and insight into Chinese culture.

Arrive in Beijing by international flight, our car will pick us up and transfer to our hotel. In the evening we take a visit to Wangfujing Street.

Your first stop is the Summer Palace which was used as the royal family’s "Palace to avoid the heat" in summer. Then drive to visit the impressive Tiananmen Square where most of the national ceremonies are held. From the square, you can walk to the splendid Forbidden City.

Arriving at the largest imperial palace, people are often impressed by the high red walls and a large number of buildings with golden roofs. You can take a famous Rickshaw Hutong Tour & Local Family Visit. Hutongs are traditional alleyways that made up Beijing’s old city planning. The rickshaw ride takes you on an immersive tour to get a wonderful glimpse into yesterday’s world, the old way of life and traditional Beijing culture, and see the dramatic changes the city has undergone.

Today, you'll first visit the fascinating Mutianyu Great Wall. You can take the cable car up and then walk down. The wall was constructed from the 7th century onward to protect the Chinese empire from invaders; it remains an unmissable part of the overall China experience. Then, you'll drive to Olympic Park to see the modern masterpiece — Bird Nest & Water Cube — from the outside. At night, you can then end the day with the Kong Fu Show at the red theater.

First, you'll visit the Temple of Heaven, where the emperors of the Ming and Qing dynasties worshipped the Gods of Heaven. From there, head to the Pearl Market where you’ll find nearly all the things you want to buy. Then you'll transfer to station for the bullet train to Zhengzhou.

Arriving in Zhengzhou, the capital city of Henan Province, you'll find yourself in the geographical center of China. It is renowned as one of the eight historical capitals: 3600 years ago, Zhengzhou was the capital of the Shang Dynasty (1766 BC - 1050 BC). During the following dynasties, it served as the capital four times. It is considered to be the cradle of China's civilization.

In the morning, visit the Henan Museum built in 1927, one of the oldest and largest museums in China, before heading to the Shaolin Monastery. Known for countless Kung Fu films, the Shaolin Temple was founded in the 5th century and is a Chan Buddhist temple that has long been famous for its association with Chinese martial arts and particularly with Shaolin Kung Fu. If time permits, you can watch the Shaolin Kongfu performance.

You can also stop at the Pagoda Forest, another highlight and graveyard of the Shaolin Temple. Housing the tombs of eminent monks from different historical periods, it is the largest pagoda forest in China.

Afterward, it's a two-hour drive to Luoyang which lies in the west of Henan Province. Luoyang served as the center of politics, economy, and culture in China for 1,500 years and was the capital city since the Xia Dynasty (2070–1600 BC) — 105 emperors of 13 dynasties set their capitals in Luoyang during China’s history.

You'll then take the bullet train to Xian, home of the Terracotta Warriors and a 'living history museum' full of historical and cultural relics. You can also visit the Muslim Quarter; there are around ten mosques in the area, among which the Great Mosque is the most famous and popular.

Today, drive one hour to the suburbs to marvel at the powerful Qin Terracotta Warriors. It is a collection of terracotta sculptures depicting the armies of Qin Shi Huang, the first Emperor of China. It is a form of funerary art buried with the emperor in 210–209 BCE for the purpose of protecting the emperor in his afterlife. The figures vary in height according to their roles (the tallest being the generals), as well as warriors, chariots, and horses.

Then, you'll drive back to the city and visit South Gate Old City Wall, which is the most complete city wall that has survived in China, as well being one of the largest ancient military defensive systems in the world.

In the evening, transfer to the airport and take the flight to Chongqing. Meeting with your guide and driver, you'll be taken to the Yangtze River Cruise Ship. En route, you will have a view of the Chongqing Hongya Cave located on the bank of Yangtze River.

Enjoy the cruise on a luxurious boat. You'll have a buffet breakfast and optional shore excursions to choose from, such as the Fengdu Ghost City tour or the Shibao Village tour.

Today, you can visit the White Emperor City, pass through the Qutang and Wu Gorge, and visit Shennv Stream. At the end of the day, enjoy a farewell party on the boat.

Today, you'll experience one of the largest dams in the world — the Three Gorges hydroelectric dam that spans across the Yangtze River near the of Sandouping. Arriving at the Yichang port, your guide and driver will pick you up and transfer you in time for your flight to Shanghai.

Today, you'll first visit Yu Garden before exploring the nearby markets. In Yuyuan, you can see the sophisticated design and fine layout of pavilions, halls, rockeries, ponds, and cloisters. Then, visit the Shanghai Museum which specializes in ancient artworks of China, especially bronze ware, chinaware, calligraphies, and paintings.

Afterward, take a walking tour of Nanjing Road and The Bund to enjoy the modern view of Shanghai. In the evening, take an elevator up to the TV Tower for an amazing view over Shanghai.

Visit the beautiful Water Town of Zhujiajiao by boat before driving back to Shanghai and Tianzifang, a historical living quarter that has evolved into a modern leisure area with interesting coffee shops. You can stop by the silk factory before transferring back to your hotel. In the evening, you can enjoy an acrobatic show, one of the most popular forms of entertainment in Shanghai.

You'll have some free time in the morning before being transferred to the airport for your departure flight.

Plan your trip to China

Plan your trip to China

Experience the ancient capitals of China, regarded as the cradles of...

Spend a quick five days touring the most historic sights of China's...

The Great Wall of China is one of the New 7 Wonders of the World and an...

In just a week you'll manage to cover many of the highlight cities of...

This weeklong tour follows a route from Beijing to Shanghai—two great...
Best of Beijing

In five days you can experience the highlights of Shanghai plus take a...

This weeklong tour follows a route from Beijing to Shanghai—two great...

This 8-day tour to Beijing, Xian, and Shanghai shows off China's...

This packed itinerary covers many of China's highlights, starting in...

You'll pack an incredible week with the highlights of China's Yunnan...

Make the most of your time in Chengdu in Southwest China on this 4-day...

Go on an adventure at the top of the world and let ancient Tibetan myths...
China Tours & Itineraries

Make the Most of Your Time in China

With strategic planning you can cover China´s highlights, like Beijing,...

In 10 days you can see China's highlights plus embark on an active...

With two weeks you can plan a diverse vacation that covers every major...

Timing is everything. Unless you want to partake in the world’s largest...

Once the new year’s celebrations wind down, it is shoulder season in...

Many parts of China are thawing out from below-freezing temperatures as...

April is marked by rain showers and cherry blossoms, signaling spring in...

China in May: Travel Tips, Weather, and More

Kimkim has selected the best China travel agents so you'll have a...

This packed itinerary covers many of China's highlights, starting in...

You'll pack an incredible week with the highlights of China's Yunnan...

Make the most of your time in Chengdu in Southwest China on this 4-day...

Many parts of China are thawing out from below-freezing temperatures as...

With strategic planning you can cover China´s highlights, like Beijing,...

Take a great trip to China and experience the country's most famous...

Discover the Best of China: Beijing to Shanghai - 14 Days

Experience China's most famous attractions on this two-week tour. Trek...

Take your kids to China, a nation of ancient history and modern wonders....

How to Get from Hong Kong to Great Wall of China

There are no sections of the Great Wall near Hong Kong, so most...

How to Get from Shanghai to Great Wall of China

There aren't any sections of the Great Wall near Shanghai, so most...

How to Get to Lhasa

It takes a bit of pre-planning to get to Lhasa (nicknamed the "Roof of...

How to Get from Beijing to the Terracotta Warriors

To get to the Terracotta Warriors from Beijing, travelers must first...

How to Get to the Great Wall of China

How to Get from Hong Kong to the Terracotta Warriors

To get to the Terracotta Warriors from Hong Kong, travelers must first...

How to Get to Beijing

Steeped in history and tradition, Beijing is a city of contrasts....

How to Get from Beijing to the Yangtze River

How to Get from Beijing to Lhasa

How to Get to Suzhou

Suzhou, sometimes referred to as Soochow, is an important economic city...
Getting Around China

Gary C.
Australia
"I d just like to thank Lemon and the team from kimkim for a such a well organised tour of China ! My three guides Jerry, Candy and Danny treated me very well..." read more
Traveled to China solo in June, 2019

Shiru H.
California, United States
"I ran into KimKim while researching our trip to China and thought I'd just send an email to see what happens. Max's prompt, professional, and thoughtful resp..." read more
Traveled to China as a family in May, 2019
Plan your trip to China
Customize your trip with help from a local travel specialist
Plan Your Trip