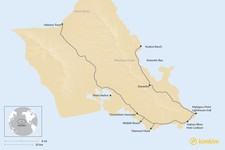 “The Heart of Hawaii” may be best known for the urban chic attitude of Honolulu and Waikiki, but it’s also home to quaint towns and rural roots in the interior and along the Windward Coast. And then there’s the legendary North Shore, synonymous with hot wave action and a cool surfer vibe.

From surfing at sunrise to toasting at sunset, the “world’s most famous resort” is packed with diversions, attractions, entertainment, global fare, and retail from souvenir to sophistication status. One of the world’s most famous urban resort areas, Waikiki takes you from shopping in designer shops to paddling in an outrigger canoe to sipping a mai tai at sunset in a beach bar among patrons sporting board shorts and flip flops. You’ll be hard-pressed to find a finer people-watching place in any Pacific Island destination!

At the “Koko Head” or east end of Waikiki is Diamond Head, a dormant volcano is considered Oahu’s most famous natural landmark. You can hike into this State Monument or simply enjoy the scenery from Kapiolani Park at its ocean side base.

Long considered a “must do” as the only royal palace on U.S. soil, Iolani Palace shares opulence, innovation and political intrigue in both guided and self-guided tours. Meticulously restored to its former grandeur, this National Historic Landmark celebrates King David Kalakaua and his sibling successor, Queen Liliuokalani, who entertained world leaders and dignitaries in this affluent residence that boasted the marvels of electrical lights and telephones.

Pearl Harbor serves as a central gathering place for the World War II Valor in the Pacific National Monument that consists of nine historic locations in Hawaii, California and Alaska. Of these, five are within Pearl Harbor itself – USS Arizona Memorial, USS Oklahoma Memorial, USS Utah Memorial, and parts of Ford Island and Battleship Row. It’s also home to the USS Missouri Battleship, Pacific Aviation Museum and USS Bowfin Submarine that are designated as the Pearl Harbor Historic Sites.

Expert tip: Go to the U.S. National Parks website to reserve space for the free Arizona Memorial Tour, or book onsite tours that include ground transportation, tickets and add-ons for the Pearl Harbor Historic Sites. If this isn’t on your “bucket list,” you most definitely need to add it.

The quintessential surf town, Haleiwa is popular among surfers, stand up paddlers, anglers and artists. Running through its heart, Kamehameha Highway is flanked by colorful surf shops, cool boutiques and laid back eateries.

Expert tip: Take it low key by packing a picnic lunch to share at Haleiwa Beach Park or add a little “Hawaiian Punch” by grabbing a shave ice from several of Oahu’s most coveted shops that concoct this island sweet treat.

A treasure trove of roadside stands, shrimp trucks and beautiful beaches, the Windward Coast plugs into a chill “neighbor island” attitude. Enjoy cultural experiences, horseback riding, and both stand up paddling and kayaking on pristine Kaneohe Bay. Especially if you’re staying in Waikiki, always plan on making a full day of it since there’s so much to see and do. Adventure literally runs amok at Kualoa Ranch, where you can giddy-up with horseback rides, ATV adventures, movie set tours and ziplining.

The highway hugs shoreline and works up bluffs along this scenic stretch of Oahu that’s home to primo snorkeling spots, Halona Blow Hole Lookout and easy hiking to the 647-foot summit of Makapuu Point Lighthouse trail. Favorites include hiking the Makapuu Lighthouse trail during whale watching season to spot humpbacks frolicking offshore and watching hang gliders sail with the breeze while soaking in the sun at Sandy Beach.

Expert tip: Bring a fully charged camera (and a spare battery). You would find a plethora of postcard perfect photo ops here

Kimkim has selected the best Hawaii travel agents so you'll have a...

Top 7 Things To Do In Maui

This is the place for hiking, snorkeling and windsurfing. Diversity...

Top 6 Things To Do In Oahu

“The Heart of Hawaii” may be best known for the urban chic attitude of...

Top 7 Things To Do On The Big Island

Youngest and southernmost in the chain, “The Big Island” is the creation...

Top 6 Things To Do In Kauai

Hawaii’s Grande Dame, the “Island of Discovery” is graced by bold...

Top 6 Things To Do In Oahu

“The Heart of Hawaii” may be best known for the urban chic attitude of...

Top 6 Things To Do In Kauai

Hawaii’s Grande Dame, the “Island of Discovery” is graced by bold...

Top 7 Things To Do On The Big Island

Youngest and southernmost in the chain, “The Big Island” is the creation...

Top 7 Things To Do In Maui

This is the place for hiking, snorkeling and windsurfing. Diversity...

Tanguy P.
California, United States
"Thx to Kimkim my family had a great vacation. I was tasked to organise the family trip :-) As I had never been to Hawaii I didn’t know where to start. Findin..." read more
Traveled to Hawaii as a group in April, 2016

Edouard T.
California, United States
"I used kimkim for a family trip to Hawaii. Kimkim was particularly useful to help me cut through the noise and get the information I needed. Most importantly..." read more
Traveled to Hawaii as a group in January, 2016