Casablanca is Morocco's modern commercial capital, so although its Medina isn't a must-see, a few other sites are worth visiting. Hassan II Mosque is the city's premier attraction—if you can only see one thing in Casablanca, let it be this! It's the largest mosque in Morocco, sitting scenically on the edge of the Atlantic Ocean. Its massive complex includes a museum, baths, Koranic school, library, and a prayer room supported by 78 granite and marble pillars. As the second-largest mosque in the world, the prayer room holds 25,000 people, and the outside courtyard can accommodate an additional 80,000 worshippers.

The mosque's 650-foot (200-m) minaret is the tallest structure in Morocco and the tallest minaret in the world. As you walk up to the mosque, admire the impressive exterior and surrounding area, then make your way inside. What makes this mosque even more unique is that non-Muslims can enter, which isn't common in Morocco.

Once inside, you can admire the ornate design with beautiful green hues and mosaic tiles. The lavish interior blends wood, marble, and carved stone together with arched and ornamented ceilings. The roof is covered with emerald green tiles, and at night, the mosque glows orange, illuminated by lights that reflect on the ocean's waves. Artisans from across Morocco contributed to this superb architectural masterpiece.

Casablanca is the country’s most modern city and a conglomeration of stark-white buildings. The present city, known colloquially as “Casa” or “El Beida,” was founded in 1912. Straddling east and west, it's the commercial and financial capital of Morocco where tradition and modernity co-exist.

In the 7th century, Casablanca was no more than a small Berber settlement clinging to the slopes of the Anfa Hills. However, for strategic and commercial reasons, it was already attracting the attention of foreign powers. In 1468, the town was won by the Portuguese, who destroyed the city’s private ships. In the early 15th century, the port became a haven for pirates and racketeers. Anfa pirates became such a serious threat later in the century that the Portuguese sent 50 ships and 10,000 men to subdue them, leaving Anfa in a state of ruins.

By the mid-1800s, Europe was booming and turned to Morocco for increased supplies of grain and wool. The fertile plains around Casablanca were soon supplying European markets, and agents and traders flocked back to the city. Spanish merchants renamed the city Casablanca, and by the beginning of the 20th century, the French had secured permission to build an artificial harbor.

The city's handsome Moresque buildings, which meld French-colonial design and traditional Moroccan style, are best admired in the downtown area. Visitors who spend time there in the Quartier Habous and the beachside suburb of Ain Diab will enjoy a blend of local flavors, historic charms, and modern amenities. This old pirate lair continuously looks toward the future, embracing the European-urban sophistication underpinning life here for the past century.

As you explore the Hobous, Casablanca’s “New Medina,” always look around you. Established in the 1930s by the French, enjoy the charming streets and admire art deco architecture. Pop into some artisan shops to browse local crafts, including olives, textiles, and spices. As an idealized version of a traditional medina, you'll appreciate the clean streets, attractive Mauresque buildings and arcades, neat rows of shop stalls, and even a small park.

Upon its establishment, the new medina was a unique experiment: a medina built to Western standards to accommodate the first rural exodus in the 1920s. Though undeniably ersatz, it blends Moroccan architecture with French ideals, and its souq offers excellent opportunities to source souvenirs. The Royal Palace (closed to the public) is to the north of the district. To the south, you'll find the old Mahakma du Pasha with its more than 60 rooms decorated with sculpted wooden ceilings, stuccowork, wrought-iron railings, and earthenware floors.

Contrast the new with the city's history and visit the Old Medina. At the beginning of the 20th century, Casablanca consisted only of the old medina, which comprised no more than a few thousand inhabitants. The walls around the old town were originally pierced by four gates, two of which survive today. Bab Marrakech and Bab el-Jedid, on the western side, face onto Boulevard Tahar el-Alaoui. A daily market, with jewelers, barbers, public letter-writers, and so on, stretches out along the length of the walls. Opposite the fishing harbor is the scala, a fortified bastion built in the 18th century during the reign of Sidi Mohammed ben Abdallah. Behind the bastion is the marabout (shrine) with a double crown of merlons, containing the Tomb of Sidi Allal el-Kairouani.

Take a break from shopping in Mohamed V. Square, an airy plaza featuring tall palm trees and French Colonial architecture. Stroll around the gardens, enjoy the fountain, or relax on a bench to people-watch. If you'd like to take a longer walk, you'll find Arab League Park nearby, home to 30 acres of walking paths and green spaces. Bordering the park on its northwest side is the Sacred Heart Cathedral.

Grab a pre-dinner drink or coffee at the famous Rick's Cafe. If your main reason to tour Casablanca is to follow Ingrid Bergman and Humphrey Bogart's footsteps, this cafe recreates the famous scene in the legendary film!

Check out the Clock Tower, which marks the busiest entrance to the old medina and is one of the most recognizable landmarks in downtown Casablanca. The current tower is a 1993 reproduction of the original 1911 structure, which fell into disrepair and was dismantled around 1950. Then head to the Notre Dame Church. A striking example of European modernism, this 1956 Catholic church is notable for its elongated concrete entrance and striking stained-glass windows, which French artist Gabriel Loire designed. It overlooks the Rond-point de l'Europe (aka Mers Sultan Roundabout).

Lastly, join the locals for an evening ritual and stroll along the Beach Promenade. Casablanca is set on the Atlantic Ocean and offers a scenic promenade, perfect for a leisurely walk. Follow the Boulevard de la Corniche between two of the city's beaches. Often called Morocco’s “Miami,” you'll find several buzzy cafes, restaurants, and bars along this stretch. You can also visit the El Hank Lighthouse and enjoy views of the Hassan II Mosque from afar. 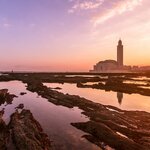 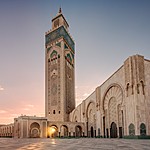 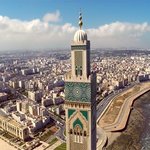 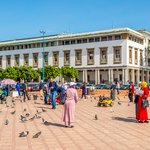 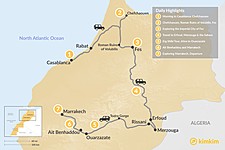 Discover Morocco's highlights with this fast-paced 7-day trip beginning in Casablanca and ending in Marrakech. Visit the 4 imperial cities of Rabat, Meknes, Fes, and Marrakech. Travel along old caravan routes in the desert, and spend the night camping among Saharan dunes and listening to traditional Berber music. Discover old fortified kasbahs and hidden oases before climbing over the High Atlas mountains into bustling Marrakech. 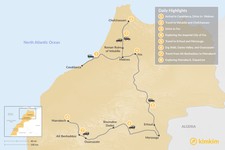 Spend a week on a grand tour of Morocco and its gems on this itinerary, which guarantees a taste of the country's iconic landscapes and landmarks. You'll begin in the modern commercial capital of Casablanca, where you can pay homage to its eponymous classic film, then head through Meknes, visiting Roman ruins along the way. Next up is the Instagram-worthy "Blue City" of Chefchaouen, a stunning celebration of color and culture. Get lost in the medinas of Fes and travel across the Atlas Mountains to the Sahara Desert, which you can explore by camel or ATV. You'll meet the area's nomadic people, dine by the fire as you watch local performers, and sleep overnight in a traditional Bedouin tent before you end your trip in the bustle and beauty of Marrakech. 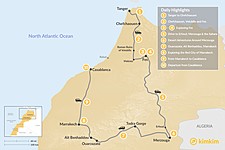 Morocco Grand Tour: Tangier to Casablanca via the Desert - 10 Days

This 10-day itinerary combines culture, history, and adventure. Begin in northern Morocco in Tangier and Chefchaouen before working your way south to Fes, through the desert, and over the Atlas Mountains to Marrakech. Finish in the commercial capital of Casablanca with a trip to the breathtaking Hassan II Mosque.

If you have time to spare while visiting Casablanca, consider exploring...

The Hassan II Mosque is Casablanca's premier attraction—if you can only...

On this 11-day tour of Morocco, you’ll begin and end your travels in...

Take a luxurious round trip around northern Morocco, where you'll dive...
Best of Casablanca