Enjoy free time to explore the picturesque town of Ouarzazate, known as the "Gateway to the Sahara." Start in the town's 19th-century Taourirt Kasbah. From the top, you can enjoy panoramic views of the surrounding landscape. On a clear day, your eye can stretch as far as the red-mud city of Aït Benhaddou, the green Draa Valley, and the rust-colored Todra Gorge!

The town gained popularity thanks to the film industry. Enjoy a movie studio tour (Atlas Corporation Studies or CLA Studios) or visit the Musée du Cinema. Learn about the films produced in the region by getting an up-close look at props and sets from hits such as Black Hawk Down, Prometheus, American Sniper, and Game of Thrones.

For centuries, people from the Atlas, Drâa, and Dadès Valleys converged to do business at Ouarzazate’s sprawling Taourirt Kasbah, and a modern garrison town was established here in the 1920s to oversee France’s colonial interests. An isolated military outpost during the years of the French protectorate, Ouarzazate—which means “no noise” in the Berber Tamazight language—long lived up to its name. The center of Ouarzazate is easily explored on foot. Avenue Mohammed V, the main street, runs from east to west with shops, cafés, banks, pharmacies, and tour agencies all along its length.

As Ouarzazate’s only historic building, the Taourirt Kasbah stands as a monument to Glaoui expansionism. Unlike other Glaoui kasbahs, Taourirt escaped ruin by moonlighting as a Hollywood backdrop and attracting the attention of UNESCO, which has carefully restored small sections of the inner sanctum. Follow the maze of stairwells to the top floor, where you’ll find a prayer room through keyhole archways, traces of stucco, and an original tataoui ceiling. Afterward, wander through the village inside the kasbah walls, and you might also find deals on local crafts in backstreet shops.

Atlas Film Studios is the first ‘Ouallywood’ studio, established by Mohammed Belghimi in 1983. Displays, sets, and props from movies filmed here include Jewel of the Nile, Kingdom of Heaven, and Kundun. Guided tours run every 20 to 40 minutes and take you through some of the stages, sets, and workshops incorporated on-site. And who knows, you may even get discovered by a talent scout! 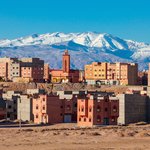 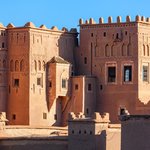 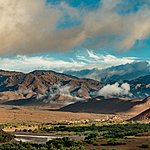 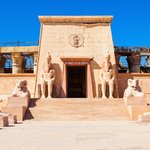 Itineraries with Explore the Cinematic Desert Town of Ouarzazate

On this 13-day tour of Morocco, you will explore the country’s ancient history and adventure through the desert. In Casablanca, visit the Hassan II Mosque & Hassan Tower–one of the largest in the world–and then, explore Chefchaouen, the iconic blue-hued city. Go camping in the Sahara Desert and discover the ruins in Fez. The epicenter of each city is its very own medina, where you can experience the colorful local cultures up close.

Luxury Escape to the Sahara - 11 Days

Adventure your way through Morocco like royalty on this eleven-day trip that pampers you in luxury as you explore centuries-old medinas and breathtaking natural wonders. Glamp in the Sahara, stay at your own private kasbah on an ancient trading route, and cool off at exquisitely appointed riads that will be your oasis from city life. Connect with locals, learn about traditions, and enjoy the glamour of the Moroccan royal treatment.

This all-encompassing tour highlights the best of Morocco, from cultural stops in imperial cities like Casablanca, Chefchaouen, and Fes, to natural exploration in desert landscapes. You'll discover Roman ruins, hike in the wild north of Morocco, ride a camel in the Sahara for sunset, visit old kasbahs, and experience a traditional Hammam treatment. End the trip by driving over the magnificent Tizi n'Tichka Pass over the High Atlas Mountains and explore the bustling city of Marrakech.

Visit the Roman Ruins of Volubilis and the Imperial City ...

Explore Morocco's regal history as you tour ruins that date back to...

If you're craving a respite from the hustle and bustle of medinas and...

Traditional cooking class with a local non-profit in Marr...

This unique experience utilizes food to help you connect to the Moroccan...

If you have time to spare while visiting Casablanca, consider exploring...
Show more Morocco experiences

This 12-day tour of Morocco is filled with adventure, history, and...

Combine culture, desert adventures, and seaside relaxation with this...

This 8-day itinerary starts in Marrakech and combines culture,...