Enjoy a beautiful hike along the popular Queen's Route near the fishing village of Stø on the Vesterålen Islands. You'll pass picturesque views along the coastline, crossing bridges and twisting through fjords and inlets.

This moderate trek is called Dronningruta, also known as the Queen’s Route, and starts along the shoreline. Eventually, you'll make your way over the mountain between Stø and the old fishing village of Nyksund, in the far north of Langøya, Norway's third-largest island.

Named after Queen Sonja, who first visited the island in 1994. The route itself is much older and has been used by many populations, including (according to legend) the midwife of Stø on her way to assist with births in Nyksund. The route is now a combination of two well-marked hiking trails (a low and high route) running along the ocean's edge. Together, they form an incredibly beautiful walk.

When you're done hiking, you can opt for a late afternoon drive on the National Tourist Route along the west coast of Andøya—one of the best ways to experience the region's coastline and its characteristic fishing villages with colorful wooden houses. 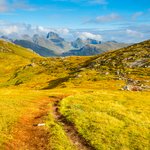 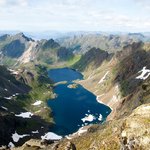 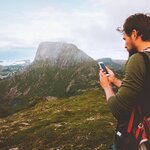 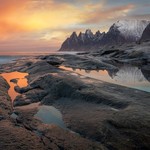 Itineraries with Hike the Queen's Route in Vesterålen 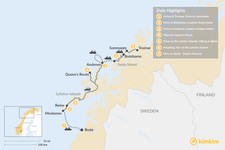 This lightly-trafficked, summertime road trip is a great way to experience Northern Norway's stunning coastline from late May to early September. The adventure starts with a half-day in Tromsø—"Paris of the North"—before you continue to Sommarøy, the first of many islands. You'll then take car ferries to Senja island and Andoya island to enjoy remote nature where fewer travelers venture. Finish the adventure in Lofoten's stunning, and yes, more popular, islands for hiking and kayaking while based in the charming village of Reine. 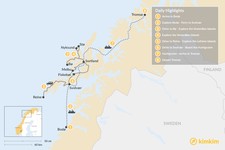 Wilder, greener, and more remote than the Lofoten Islands (though you'll have a night here, too), those who come to the Vesterålen archipelago will have access to hiking trails, peaceful beaches, rock formations, and seaside teeming with whales, not to mention extended daylight hours to soak it in by land and sea. Finish with an overnight coastal steamer to Tromsø —a lively city nicknamed 'Paris of the North'. 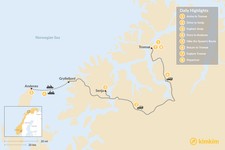 This adventurous weeklong road trip from late May to late August begins and ends in Tromsø, the country's gateway to the Arctic, where—during summer months—the sun never sets on these gorgeous views. From here, you'll journey through rugged landscapes of Norway's second largest island (Senja), and partake in active outings like cycling, kayaking, and swimming before ferrying to another less-populated island (Andøya) where spotting whales is practically a guarantee. Hike the coastal trail on the Queen’s Route before heading back to Tromsø for a few more nights of Scandinavian fun.

This self-guided summer road trip travels at a relaxed pace through gorgeous scenery above the Arctic Circle in Northern Norway. Explore two distinct archipelagos offering hiking trails, peaceful beaches, guided excursions, and a seaside teeming with whales—not to mention constant daylight hours during the 'Midnight Sun' to soak it in. Start and end the trip in Bodø, a cool little city with street art and a charming harbor.

Take yourself on a 10-day journey through the Arctic landscapes of northern Norway with this itinerary. You'll explore the craggy coasts, isolated islands, and extensive networks of hiking trails via boat safaris, kayak tours, and your own two legs. Learn about Norwegian history, try to spot eagles, and pet some dogsled huskies along the way.

This tour features a lovely cruise from Bergen to Rosendal, a small...

This self-guided summer road trip travels at a relaxed pace through...

This 12-day road trip starts from Tromsø, Norway's 'Gateway to the...

This lightly-trafficked, summertime road trip is a great way to...

Wilder, greener, and more remote than the Lofoten Islands (though you'll...

This adventurous weeklong road trip from late May to late August begins...
Best of Vesterålen

Kimkim has selected the best Norway travel agents so you'll have a...
Plan your trip to Norway
Customize your trip with help from a local travel specialist
Plan Your Trip