Just south of Playa Carrillo lies Punta Islita, home to the Macaw Recovery Network. The network is a conservation organization dedicated to the survival of Costa Rica's native macaws. Thanks to their efforts, although the scarlet macaw had previously gone extinct in this area, the birds are now back and on their way to thriving once again! The reserve is truly a must-see for anyone who wants to experience the natural wonders of the area and meet these remarkable, charismatic birds for themselves.

Upon arrival at the center, you'll take a walking tour through the tropical dry forest as your guide passionately describes The Macaw Recovery Network's mission: "A future with thriving parrot populations in healthy, protected ecosystems, across their former ranges." To accomplish this, the center rescues and rehabilitates wild macaws and those affected by the illegal pet trade. They also have a program where injured birds that cannot be released are kept in safe habitats for breeding purposes. Once they become old enough, their offspring are released into the wild to thrive and further populate the nearby forests.

Throughout the visit, you'll meet many of the birds that the center has rescued and learn more about the complex restoration work performed by the organization. You'll quickly understand that their work is much more than just the rescue and breeding programs. The network also develops and implements innovations in conservation while focusing on connecting the efforts of many other organizations to make the greatest impact.

The network's accomplishments are many! For example, nearly 50 great green macaws were released on the southern Caribbean Coast in Manzanillo, and over 160 scarlet macaws were released on the Pacific Coast in Tiskita, Palo Verde, Curu, and Punta Islita in previous years. Witnessing these incredible efforts and their direct impact on the birds' survival is sure to be an experience you will cherish forever. 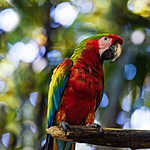 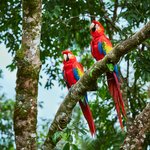 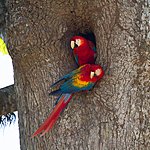 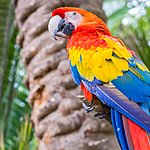 Close to Playa Sámara on Costa Rica's famed Nicoya Peninsula are the...

On the Pacific side of Costa Rica's Nicoya Peninsula sits the two scenic...

The Rincón de la Vieja Volcano the largest and most active volcano in...

Rio Celeste river, inside Tenorio Volcano National Park, is one of Costa...

Best of the Nicoya Peninsula

On the northwestern edge of Costa Rica, Nicoya Peninsula features a...

Get ready for a laid-back beach vacation to the stunning beaches of...

Get ready for a laid-back beach vacation to the stunning beaches of...

This 10-day vacation includes a self-drive road trip through some of...

You'll travel to three of the best places in Costa Rica to ride the...
Best of the Nicoya Peninsula

Kimkim has selected the best Costa Rica travel agents so you'll have a...
Plan your trip to Costa Rica
Customize your trip with help from a local travel specialist
Plan Your Trip