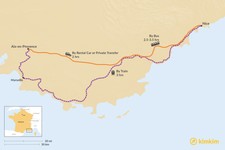 A distance of approximately 92 miles (148 km) separates Aix-en-Provence from Nice, traveling east across Provence to the northeastern edge of the Cote d’Azur.

Driving is the fastest way to journey between the two, heading due west on the A8 toll road and reaching Nice in two hours. The train is an hour slower, but hugs the Mediterranean coastline for most of the trip, offering the bonus of sea views. Buses connect the two cities in under three hours.

Once in Nice, experience the city like a local with one of our walking or driving tours, from sampling the city’s gastronomy to discovering the Old Town’s hidden highlights.

The fastest way to get from Aix to Nice is driving due east on the major A8 toll road, which connects the cities in 2 hours. Though not a particularly scenic drive, the route allows for detours into the heart of the Var countryside and passes through the lovely town of Saint-Maximin-la-Sainte-Baume, worth a stop for its medieval quarter and Gothic basilica.

If speed isn’t a priority, there’s the option of following the coast along the narrow, winding D559, but this route is best broken up into two days of driving. An efficient alternative is to split the trip between the quick A8 highway and a slower loop along the coast; the D559 between Fréjus and Théoule-sur-Mer is one of the most spectacular stretches and only adds 1.5 to 2 hours on to the journey.

Once in Nice, the traffic-free city center means it’s best to park on the outskirts in one of the Parc’Azur park-and-ride lots close to the A8, which connect to stops like Vieille Ville and Jean Médecin via electric Lignes d'Azur trams.

Private transfers are also an option if budget allows. While they’re the most expensive way of making the trip, they offer all the perks of driving with none of the stress and can be used as direct door-to-door transport from Aix to Nice.

If Nice and Aix are part of a wider tour of the region, take a look at our driving itineraries—such as this 11-day self-driving tour of Provence and the French Riviera— for more ideas on routes and detours.

The fastest direct train (a TGV OUIGO) departs twice daily from Aix-en-Provence TGV station, reaching Nice Ville in just over 3 hours. The route hugs the Mediterranean coast for much of the trip and offers memorable views over stretches of the Cote d’Azur as it travels east.

Travelers also have the option of departing from the Gare d’Aix-de-Provence station, which is centrally located but requires a connection. The journey takes 50 minutes via TER regional trail to Marseille, followed by a 2:40 TGV to Nice Ville following the same coastal route.

Nice’s Ville station is located in the town center, a 20-minute walk from the beach. Aix’s TGV station is 20 minutes outside the Old Town and requires a further taxi or bus ride from the center. TGV and OUIGO tickets should be booked well ahead of time online for the best selection and prices.

The bus is a fast and economical option, taking just 3 hours from door to door, but lacks the scenic views and multiple daily departures of the train journey.

Lignes Express Régionales buses leave from the central Aix-de-Provence Gare Routier station just three times a week and reach Nice Cote d’Azur (NCE) airport in just over 2 hours. These are a good choice if the airport is your final destination, but require a further 20-minute tram or taxi ride to reach the Old Town.

This relaxed, self-drive itinerary travels through some of the best...

G
Gordon G.
Louisiana, United States
"Valentine with Kimkim was professional and wonderful to work with as well as the individuals she had set up for our private transfers and lodgings. The lodg..." read more
Traveled to France as a family in November, 2021

Sara J.
Germany
"This was a great trip! Isabelle was able to pull this together for us very last minute and she did not disappoint! We loved the itinerary and thought it the..." read more
Traveled to France as a couple in August, 2021
M
Mary R.
Georgia, United States
"Overall this was a wonderful trip, and we were very pleased with our accommodations at Hotel a la Villa des Artistes in the Montparnasse area. That Les Jard..." read more
Traveled to France as a family in February, 2020
L
Lanier M.
North Carolina, United States
"Our trip was Amazing! Simon was so responsive, both before AND during our trip. I've traveled a lot but never used a travel agent before and what a differenc..." read more
Traveled to France as a couple in February, 2020
Create your custom-made trip to France
Get Started