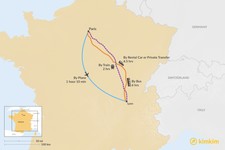 The distance between France’s capital city Paris and the country’s gastronomical epicenter Lyon is 243 miles (392 km) traveling southeast. The easiest way to make the trip is by high-speed train, which takes about 2 hours. Direct flights are also a great option, and airtime takes 1 hour and 10 minutes.

Driving yourself in a rental car or hiring a private transfer are both convenient modes of travel, but the route takes 4 hours and 30 minutes with favorable traffic conditions. Buses are the most economical choice, but can take more than 6 hours and aren't recommended.

For food and wine lovers, consider continuing on from Lyon to Marseille in this 8-day culinary Rhône Valley tour.

Trains are the most logical method of transport, as they depart every hour from Paris Gare de Lyon train station, one of Paris’ main train hubs located in the east of the city, and take you directly to Lyon Part-Dieu, Lyon’s primary train station located 30 minutes walking to the city’s historic center, Le Vieux Lyon.

SNCF runs TGV InOUI trains every hour or so, and they take just 2 hours. Avoid TER trains which are not high speed and take 5 hours. TGV InOUI trains are comfortable, offering Wifi, power outlets, and a buffet car, as well as first and second class tiers. Make sure to reserve your tickets in advance on SNCF’s website, as trains do sell out and prices increase the later you book.

Air France offers frequent direct flights from Paris’ Charles de Gaulle Aiport (CDG) to Lyon-Saint Exupéry Aiport (LYS). The cost is slightly higher than the train, and tickets should be booked as early as possible.

Flight time is only 1 hour and 10 minutes, though passengers should always arrive at the airport at least an hour prior to boarding. Note also that CDG is the second busiest airport in Europe, and located over 20 miles from the city meaning getting there can take up to an hour by car.

Having a car gives you the freedom to explore the route between Paris and Lyon, and perhaps take a few side trips along the way. The fastest route brings you southeast on the A6 highway. For a quick pit-stop on this route, Mâcon is a picturesque riverside city in the Burgundy region. Or take a 45-minute detour and see the capital of the Burgundy region, Dijon. While there, enoy the varied architectural styles from Gothic to Art Deco, and taste the world-famous mustard.

Rental car companies abound in Paris. Remember that non-EU driver’s license holders must obtain an International Driver’s Permit in order to drive in France. From Lyon, consider our 12-day road trip through the Rhône Valley.

Alternately, you can hire a private transfer or take a taxi. Some private tour companies offer suggested site stops such as the Palace of Fontainebleau, a lavish 1900 room palace which housed famous ruler, or Chateau de Chateauneuf, a medieval castle with a fascinating history.

Multiple companies run regular buses from Paris to Lyon including Blablabus, Flixbus, and Eurolines FR. The bus is the cheapest choice, however, the travel time is three times longer than the train at least, with some trips taking 8 hours.

Jessica Z.
Pennsylvania, United States
"Stephen's planning was exactly what we were looking for! Each of the guides/tours he booked for us were excellent - we learned a lot and had a blast the whol..." read more
Traveled to France as a couple in November, 2019
U
Usha M.
United States
"KimKim did a great job planning for the wants/needs of our group. We used KimKim for transportation, cooking classes, winery tours, and train tickets. I ca..." read more
Traveled to France as a group in September, 2019
Create your custom-made trip to France
Get Started