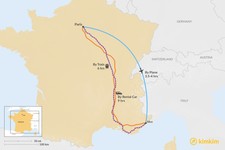 Nice lies roughly 425 miles (685 km) miles southeast of Paris, on the far eastern edge of the French Riviera. Despite the distance, travel between the cities is relatively easy, with direct flights and high-speed trains connecting them in as little as four hours.

The fastest way to reach Nice from Paris is by plane, with flights taking an hour and a half and an overall door-to-door travel time of under four hours.

Direct high-speed trains link the cities in just under six hours and require fewer steps and connections than flying. Self-driving takes nine hours and is best broken up into multiple days to allow for sightseeing throughout Provence and the Côte d’Azur. For more ideas on stopovers and detours, explore our 10-day and 14-day Paris to Nice itineraries.

Direct flights into Nice Côte d’Azur (NCE) depart from both Orly (ORY) and Charles de Gaulle (CDG) airports. The total flight time is just 1.5 hours, but transport to and from the airports, as well as standard pre-boarding waits, means the overall journey takes about 3.5 to 4 hours.

Choosing which Paris airport to depart from depends on your location and budget; Orly (ORY) is smaller and closer to the city, which often makes it the more convenient choice. The fastest way to reach the airport from central Paris is by taxi, private transfer, or the Orlybus, which departs from Denfert-Rochereau Metro/RER station and takes about 30 minutes.

Upon arrival at Nice (NCE), the easiest way to get to the city center is via the brand new Lignes d’Azur light rail, which runs from terminals 1 and 2 to the main thoroughfare of Jean Médecin in 25 minutes. Other choices are the airport shuttle buses and fixed-rate taxis, both of which reach Nice in under 30 minutes.

While a little slower than flying, traveling to Nice via train is straightforward and direct, offering a scenic entrance along the Côte d’Azur. The fastest option is the direct high-speed TGV, which departs Paris Gare de Lyon and arrives at Nice Ville station in just under 6 hours.

Travelers have the choice of budget OuiGo or the more deluxe InOui trains—the latter’s higher price comes with no baggage limit, a buffet car, and free wifi.

Choosing a seat on the right side of the train offers the best vantage point for picturesque views; the last 2 hours of the route skirt the coast along the Riviera as the train approaches Nice.

Gare de Lyon station is located in southeast-central Paris, within a 30-minute taxi, metro, or bus ride of most areas. Nice Ville is an easy 20-minute walk from Vieux Ville and the beach.

The fastest way to drive from Paris to Nice follows major high-speed autoroutes and takes about 9 hours. Driving out of Paris can be stressful, and the major highways aren't particularly scenic, so the train is a better choice unless you’re looking to slow down and break the drive up into multiple days.

The most direct route follows the A7 autoroute due south, turning east near Aix-en-Provence on the A8, which cuts across southern Provence and the Var region before reaching Nice. It’s a journey best taken in multiple steps, with Lyon as a prime stopover spot at almost exactly halfway.

Another option is to take the train, but disembark at Aix-en-Provence or Marseille and drive from there—this offers the chance to enjoy the most scenic stretch of the trip without the Paris traffic and the long drive south.

Upon arrival in Nice, the traffic-free city center means it’s best to park in one of the Parc’Azur park-and-ride lots close to the A8, which are free with the purchase of a Lignes d'Azur tram ticket into the center.

How to Get from Paris to Bayeux

The best options for getting from Paris to Bayeux are taking the train...
Getting Around France

This relaxed, self-drive itinerary travels through some of the best...

Spend ten days taking in some of the top treasures in France from north...

This 10-day itinerary is ideal for those seeking the splendor of French...

Kaitlyn B.
California, United States
"Ambre-marie was amazing! She did such a great job tailoring the trip to our wants and needs. She was available throughout our trip anytime we ran into proble..." read more
Traveled to France as a couple in September, 2022

Chrissy J.
Texas, United States
"We really couldn’t have asked for anything more with the Exceptional and Perfect trip Clément and his team put together for us! Each and every tour was amaz..." read more
Traveled to France as a family in December, 2022

Liana V.
Texas, United States
"This was our first family trip to Paris and I wanted to make it special. Ambre-Marie worked with me for six months to plan this! She was patient and kind wit..." read more
Traveled to France as a family in December, 2022

Kimberly C.
Pennsylvania, United States
"Valentine and the Kimkim travel team was very reliable and sufficient. They provided a trip plan which made my trip to the French Rivera most enjoyable. I ..." read more
Traveled to France solo in November, 2022

Merlin M.
Texas, United States
"Our trip was fabulous! We enjoyed all of it and felt special with the personalized plan that was paced perfectly for us. My most unforgettable evening was ..." read more
Traveled to France as a couple in October, 2022

Miranda D.
Pennsylvania, United States
"We had an amazing time on our honeymoon in Paris and the Loire Valley! We started the trip arriving in Paris and stayed at Hotel a la Villa des Artistes. We ..." read more
Traveled to France as a couple in October, 2022

Alex G.
Texas, United States
"I only requested a ballon ride in Loire Valley, going to three cities in France for 8 days, traveling by train between cities, with the final stop in Paris. ..." read more
Traveled to France as a group in October, 2022
Create your custom-made trip to France
Get Started