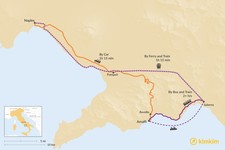 The historic city of Naples is located approximately 38 miles (61 km) from Amalfi via car, making for a fairly easy destination or day trip up the coast. The easiest way to get there is by driving directly if you have a rental car, or arranging for a private transfer. Other options involve a combination of bus, ferry, and train service, as the closest train and ferry departures are in nearby Salerno.

There is no commercial air service between the two cities, but there are private jet charters available through the Salerno-Pontecagnano Airport for those travelers seeking a fast and luxurious option.

While visiting southern Italy, consider this 7-day tour of the area, which includes exploring the famed island of Capri, as well as seeing the remains of Pompeii and visiting the 13th-century Villa Rufolo in Ravello.

Driving from Amalfi to Naples takes you through some of Italy’s most beautiful countryside, with views of the coast along the way. Most drivers will take the A3 highway, winding towards Pompeii and traversing the coastline, which is the most direct route. The Strada Statale 163 takes drivers through Positano and Sorrento, then meets up with the A3. This is a more picturesque drive, but takes about 30 minutes longer than driving straight through on the A3.

Regardless of route, drivers should consider their own comfort level before embarking as the drive, while beautiful, also has often-heavy traffic and some narrow roadways. While hiring a private car is sometimes more expensive, it is the most hassle-free way to get from one place to another.

By Ferry and Train

Naples Bay Ferry offers high-speed ferry service between Amalfi and Salerno several times a day. Ferry schedules are somewhat limited between September and May, but otherwise are an easy and affordable way to travel. The train station in Salerno is a quick five-minute walk from the ferry terminal, and trains run nearly every hour between Salerno and Naples. Train travel times run between 40-55 minutes, depending on service and routes.

By Bus and Train

The SITA bus line is the main service provider between Amalfi and Salerno, with daily buses that go back and forth between the two cities. The bus takes about an hour and 15 minutes, and stops directly at the train station. Trains run regularly from Salerno to Naples, and tickets can be purchased at the station.

The Salerno train station is considered a hub for southern Italy, with five platforms and trains that link Salerno to a wide range of cities. In addition to being near the bus and ferry platforms, the station is home to the Metro Salerno railway, which provides transport in and around the city itself.

From the sleepy towns of the Amalfi Coast to Rome's buzzing nightlife,...