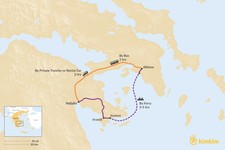 The distance from Athens to the Peloponnesian seaside town of Nafplio is about 85 miles (137 km). The easiest and most comfortable way to get from Athens to Nafplio is by rental car or private transfer. There is also the option of traveling by bus, or by ferry to one of the nearby port towns. This route does not currently have a train connection.

With its unique mix of Venetian and Neo-Classical architecture, Nafplio is widely regarded as one of the most beautiful towns in the Peloponnese. You can explore Napflio and the rest of the peninsula with these twelve-day and fifteen-day itineraries.

Private transfers can be booked to take you from your hotel or from Athens airport directly to Nafplio. If you prefer to self-drive, you can book a rental car from any of the many major rental companies with a presence in Athens.

The route to Nafplio runs along the Saronic Gulf and through the Isthmus of Corinth. The ruins of ancient Corinth, located at the halfway point between Athens and Nafplio, are a worthwhile sightseeing stop. There is also a small archaeological site in nearby Isthmia.

You will have to pay tolls on the way from Athens to Nafplio. Tolls in Greece are generally inexpensive, and are paid in cash to a tollbooth attendant.

KTEL Argolida runs buses from Athens to Nafplio throughout the day. Bus timings are reduced slightly on Sundays and holidays.

The bus leaves from Kifissos Bus Terminal (KTEL Bus Station A). This station is located on a highway in the north-western part of Athens. The closest metro stop is “Agios Antonios” on the red line (M2) of the Athens metro, and you will have to walk about 15 minutes from the metro stop. Kifissos Bus Terminal can also be accessed via city bus 51 from Omonia Square, or by taxi.

Bus tickets can be booked in advance, or purchased at the station.

It is possible to get to Nafplio from Piraeus port by ferry. However, the route is somewhat indirect.

First, you will have to take a ferry from Piraeus to the towns of Ermioni or Porto Heli. You can access Piraeus port from central Athens using line 1 of the Athens Metro, or by rental car or taxi. Ferry tickets can be booked in advance, or purchased from the ticket offices at the port.

Once you arrive, you will need to take a bus to the town of Kranidi, from which you will be able to catch another bus onward to Nafplio.

Besides its mainland, Greece is also made up of thousands of islands, a...

Rebecca C.
Texas, United States
"This was a trip of a lifetime! Everything happened exactly how Eleni planned. The tours she chose were fantastic. All of our tour guides were knowledgeabl..." read more
Traveled to Greece as a group in October, 2022
V
Vidhyashankar B.
Texas, United States
"Overall an amazing trip and memorable experience for our family. Thanks to KimKim team and Amalia for the thorough planning. We hadn't travelled in a while s..." read more
Traveled to Greece as a family in November, 2022

Gina G.
Washington, United States
"We had the most incredible time in Greece! KimKim made the trip super easy for us! Tassos and the KimKim Team were super responsive and worked with us to pla..." read more
Traveled to Greece as a family in June, 2022

Serena M.
Idaho, United States
"I can not believe it has taken me so long to write this review! Two families with teenagers worked with Dimitris to plan a tour to Greece and it was amazing..." read more
Traveled to Greece as a group in June, 2022

Isabel G.
Florida, United States
"Our trip to Greece was wonderful thanks to Angela and her team. From our drivers Alexander and Nicolas we received a personalized treatment. They were atten..." read more
Traveled to Greece as a couple in November, 2022

Erica H.
New York, United States
"This was my first, but not last, time using kimkim! The experience was fantastic from start to finish. Our travel guide, Angela, put together the perfect iti..." read more
Traveled to Greece as a group in November, 2022

Phil R.
Alabama, United States
"Our Grecian vacation exceeded every expectation! Rebecca's attention to detail, respect for our individual needs, and depth of planning, allowed us to trave..." read more
Traveled to Greece as a family in September, 2022

Karen H.
Alabama, United States
"Our trip was lovely. We were able to experience Greece from the perspective of wonderful Greek tour guides. We covered archaeological, ecological, geograp..." read more
Traveled to Greece as a couple in October, 2022

Danae K.
Canada
"Amalia was an amazing local specialist. She was very quick with her replies and altered our itinerary multiple times until we fit everything we wanted to do ..." read more
Traveled to Greece as a group in October, 2022

Lorraine R.
New York, United States
"I didn't take this trip but my brother and sister-in-law enjoyed every moment. Eleni was very responsive and extremely helpful in providing me with suggestio..." read more
Traveled to Greece as a couple in June, 2022
Create your custom-made trip to Greece
Get Started