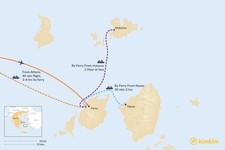 As one of the quieter Cyclades islands, Paros is a perfect complement to bustling Mykonos and Santorini. It is popular for its nature, beaches, nightlife, and traditional architecture.

You can reach Paros via a quick flight of under an hour from Athens, or a ferry from the Greek mainland. Frequent ferries also connect Paros with other Cyclades islands.

To discover Paros and the Cyclades, you could have a look at these eight-day, 12-day, or 16-day itineraries.

Several flights per day leave from Athens Airport to Paros. The flights are quick and easy; most leave in the morning.

You could also travel to Paros by sea—ferries leave regularly from both Piraeus port and Rafina, a smaller port town to the east of Athens. Most ferries are comfortable, and you’ll have the opportunity to enjoy some scenic views. Tickets can be booked in advance.

Piraeus can be reached from Athens via private transfer, taxi, or the Athens Metro. You can also get there by rental car. The drive takes about 30 minutes. Note that you may be able to bring your car on the ferry by paying an additional fee, although it’s a good idea to check with your car rental company before doing so.

Rafina is slightly further from Athens. The drive to Rafina takes about 45 minutes. While Piraeus is Athens’ main port, travelers coming directly from the airport might want to consider leaving from Rafina instead, as it is closer.

The island of Naxos is very close to Paros, and the two are often paired together in one trip. The only way to get between the two islands is by ferry (unless you have your own private water transport).

Some ferries are quicker than others. The fastest takes just half an hour, while the slowest can take over two hours. On some ferries, you’ll be able to bring a car. Tickets can be booked in advance, or purchased at the ticket offices on the quay.

All ferries leave from the main port in the center of Naxos Town.

Duration: one hour or less

The only way to get to Paros from Mykonos is by ferry. Several ferries leave each day; it’s a good idea to book in advance during the high season.

If you plan to rent a car on Mykonos, you’ll be able to take it with you on certain ferries for an additional fee. Be sure to check with your rental company beforehand.

Keep in mind that Mykonos has both a New Port and an Old Port, which can be confusing. As of 2019, all ferry traffic will use the New Port only, so your ferry should be leaving from there. To get to the New Port from Mykonos Town center, you can book a private transfer, take the water taxi (Mykonos SeaBus), or take a public bus. Taxis can be hard to find on Mykonos, especially during the summer when it is crowded.

Besides its mainland, Greece is also made up of thousands of islands, a...

Hit three major hotspots on this tour of some of Greece's most beautiful...

Off the Beaten Path in the Cyclades: Paros & Naxos - 8 Days

The stunning Cyclades are a group of Greek islands famous for their...

As the ultimate sailing adventure through Greece's coveted Cyclades...

Famous for their beautiful beaches, the Cyclades Islands aren't just for...

Both culture and nature lovers will enjoy this 12-day tour of Greece....

Taste of the Cyclades and Crete - 16 Days

The glittering Cyclades span hundreds of miles, with centuries of...

Isabel G.
Florida, United States
"Our trip to Greece was wonderful thanks to Angela and her team. From our drivers Alexander and Nicolas we received a personalized treatment. They were atten..." read more
Traveled to Greece as a couple in November, 2022

Erica H.
New York, United States
"This was my first, but not last, time using kimkim! The experience was fantastic from start to finish. Our travel guide, Angela, put together the perfect iti..." read more
Traveled to Greece as a group in November, 2022

Phil R.
Alabama, United States
"Our Grecian vacation exceeded every expectation! Rebecca's attention to detail, respect for our individual needs, and depth of planning, allowed us to trave..." read more
Traveled to Greece as a family in September, 2022

Karen H.
Alabama, United States
"Our trip was lovely. We were able to experience Greece from the perspective of wonderful Greek tour guides. We covered archaeological, ecological, geograp..." read more
Traveled to Greece as a couple in October, 2022

Danae K.
Canada
"Amalia was an amazing local specialist. She was very quick with her replies and altered our itinerary multiple times until we fit everything we wanted to do ..." read more
Traveled to Greece as a group in October, 2022

Wendy M.
California, United States
"Chris and his travel agency are worth all the stars I can give. =) Initially I wasn't sure about using an agency, even one for independent travellers, beca..." read more
Traveled to Greece as a family in October, 2022

Gigi Z.
Texas, United States
"Greece in style! I worked with Amalia to plan my trip to Athens, Santorini, and Mykonos. She was really great. She asked what I wanted to see and do and..." read more
Traveled to Greece solo in October, 2022

Mary K.
Pennsylvania, United States
"Here is my honest review of Greece and our experience with Kim Kim. I will 1000% use Kim Kim to book my next trip. Angela was fanatic. All of our drivers wer..." read more
Traveled to Greece as a family in October, 2022
Plan your trip to Greece
Customize your trip with help from a local travel specialist
Plan Your Trip