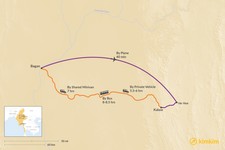 Both Bagan and Kalaw are must-see attractions in Myanmar, especially the latter which is the starting-off point for trekking adventures to Inle Lake. Getting there isn't difficult and can be done in less than 6 hours by road—it's about 165 miles (267 km). There are also direct flights which shorten the trip even more, dropping you in neighboring He Hoe about 45 minutes from Kalaw. In addition to flying and driving, there are also options to go by bus or minivan.

A final option is to not hassle with your own transportation and book a tour instead which takes care of that piece for you. This 10-day trip, for example, includes both Bagan and Inle Lake. It doesn't feature the trek from Kalaw but you have two days at Inle Lake which include a jungle canal boat cruise and spending time with the Pa-Oh ethnic group.

The quickest, most efficient way to get from Bagan to Kalaw is to fly. There are several flights operated daily by both Myanmar Airways International (MAI) and Air KBZ. They depart from Nyaung-U Airport (NYU), roughly 15 to 20 minutes from Bagan, and land at He Hoe Airport (HEH), about 45 minutes from Kalaw.

The flight itself only takes 35 to 40 minutes although you'll also want to consider the time it takes to get to Nyaung-U from Bagan, and to Kalaw from He Hoe (along with waiting in security lines at the airport). These factors will bring the total trip tally closer to 4 hours. That said, it's still faster than driving.

If you don't like air travel or simply want to save some money, the next best thing is to take a private vehicle. This can be done either by renting a car or hiring a chauffeur. The journey lasts approximately 6 hours during which you'll follow a scenic road south from Nyang-U down and over to Kalaw. It is about 165 miles (267 km).

If you want to save some money but you don't want to travel in a large bus, going by minivan is a nice middle option. OK Express has vans that serve this route, typically taking about 7 hours. They usually have air conditioning although keep in mind that, depending on how full they are, they're not always as comfortable as the bigger buses. Legroom is often cramped and luggage sometimes goes inside which can make it feel crowded.

Full-sized buses take longer to get from Bagan to Kalaw; however, it's often a more comfortable option. There's usually a fair amount of legroom and reclining seats if you want to snooze. All of them have air conditioning and many have additional features like charging outlets or water and snack services. JJ Express, which is the primary operator connecting the two cities, picks you up at the Bagan Shwe Pyi Highway Bus Terminal and drops you off at the Shwe Danu Bus Ticket station in Kalaw.

How to Get from Yangon to Inle Lake

Yangon and Inle Lake are two of the best destinations in Myanmar. There...
Getting Around Myanmar

Elizabeth S.
New York, United States
"My 23-year-old daughter and I chose to visit Myanmar to learn more about the fascinating culture, history, political transitions, and people there. Anne plan..." read more
Traveled to Myanmar as a couple in December, 2019
Create your custom-made trip to Myanmar
Get Started