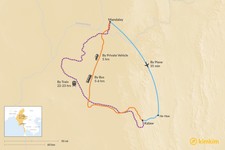 Traveling from the hot air balloon-filled Mandalay to the town of Kalaw—the starting point for treks to Inle Lake—is an easy and fairly fast trip, at least as far as travel in Myanmar is concerned. It's roughly 166 miles (268 km) between the two locations. Once you arrive, the hike to Inle Lake is considered one of the best experiences in Myanmar and well worth the journey.

The fastest way is to get there is to fly, although it's 45 minutes from the airport near Kalaw to town (which means that by the time you add in security lines, it's actually nearly as fast to drive). You also have the option of taking a private vehicle, bus, or train.

Alternatively, you can book this 10-day trip which includes Mandalay, along with two days at Inle Lake (with highlights like cruising on jungle boats and visiting the Pa-Oh ethnic group). It doesn't include the hike from Kalaw specifically, but you'll experience Inle Lake and won't have to hassle with any transportation.

Flights from Mandalay to Kalaw only take about 35 minutes; however, they arrive in the nearby town of He Hoe at which point to have to take a taxi to Kalaw. This is a 45-minute trip which brings the total travel time to about 3 to 4 hours when you factor in security and getting to the airport in Mandalay.

There are at least five airlines that offer flights, including Myanmar Airways International (MAI), Air KBZ, Golden Myanmar Airlines, Mann Yadanarpon Airlines, and Myanmar National Airlines. You depart from Mandalay International Airport (MDL) in Tada-U, a town about 15 to 20 miles (35 km) outside Mandalay, and land at He Hoe Airport (HEH).

It takes between 4.5 and 5 hours to drive from the city of Mandalay to Kalaw. You can rent a car or hire a driver, the latter of which typically offers the choice of sedan or minivan, depending on how many people you're traveling with. The total distance is about 166 miles (268km).

To get there, take Route 1 to the Yangon-Mandalay Expressway. From there, head south for about two hours until the turnoff to Meiktila. There, you'll drive east another three hours until you hit Kalaw.

Traveling by bus takes a little bit longer than driving a private vehicle but the seats are comfortable and there's fairly decent legroom. All of the buses have air conditioning and many have bonus features like charging outlets, too. The views out the windows are pleasant and there is typically water or snacks served.

The main bur operator is JJ Express which picks you up at your hotel and drops you off at Shwe Danu Bus Ticket station in Kalaw. The entire trip takes between 5 and 6 hours.

The final option for traveling from Mandalay to Kalaw is to go by train but it's not an especially good one. You have to take two trains, both of which are painfully slow and not considered comfortable by most passengers. Plus, there is an overnight layover. Some cars lack air conditioning and all of them are extremely bouncy and bumpy. Folks who are sensitive to motion or get sick easily will not enjoy this trip.

That said, the views out the windows are gorgeous—prettier even than the bus—and some people find they have an antiquated charm.

The journey will begin at Mandalay Central Station where you'll board the first train to Thazi. That takes about 2 hours and 45 minutes. You will stay there overnight and board a morning bus directly to Kalaw which takes about 6 hours and 15 minutes.

How to Get to Inle Lake

Inle Lake is without a doubt one of the best reasons to visit Myanmar....
Getting Around Myanmar

Elizabeth S.
New York, United States
"My 23-year-old daughter and I chose to visit Myanmar to learn more about the fascinating culture, history, political transitions, and people there. Anne plan..." read more
Traveled to Myanmar as a couple in December, 2019
Create your custom-made trip to Myanmar
Get Started