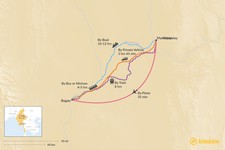 With glittering pagodas and crumbling ancient temples, Mandalay and Bagan are two of the biggest reasons to visit Myanmar — and fortunately, they happen to be fairly close to each other. The distance between the two cities is about 180 miles (288 km), making the drive time roughly 3 hours and 45 minutes.

There are flights connecting the two destinations, although by the time you factor in travel time and security lines, it takes almost as long to fly as it does to drive. There are also buses, minivans, and trains, although the latter is quite slow. One of the most popular ways, if you're not on a time crunch, is to go by boat, floating along the scenic Irrawaddy River passing small towns and pagodas.

Another option is to take this 8-day tour which includes an Irrawaddy sunset cruise, as well as transportation between the two cities. There's also this 5-day trip that focuses just on Mandalay and Bagan, including a countryside tour, bike ride, and visit to sacred temples.

The flight from Mandalay to Bagan is very quick—only about 35 minutes—however, if you add in time traveling to the airport and waiting in security lines, the total trip is about 3 hours.  Myanmar National Airlines, Mann Yadanarpon Airlines, Myanmar Airways International (MAI), and Air KBZ offer direct flights between the two cities. They depart from Mandalay International Airport (MDL) which is in the town of Tada-U about 20 miles (35 km), arriving at Nyaung U Airport (NYU), about 15 to 20 minutes from Old Bagan.

For folks who opt against air travel, the next most convenient form of travel is via private vehicle. Depending on your preference, you can either hire a driver (for up to 3 people) or rent a car and drive yourself. It will take just under 4 hours either way. There are also private minivans that will take up to 9 people in your own shuttle.

If you opt to drive yourself, simply head out of town in Mandalay on Route 2, following that road southwest for 180 miles until you hit Bagan. If your accommodations are in New Bagan, you will come to Old Bagan first and continue 15 more minutes down the road.

By Bus or Minivan

Moe Thout Tun Express operates a minivan service between Mandalay and Bagan and there is also a company called OK Express that runs a bus service. However, the buses—at least as of 2019—are not the large, comfortable VIP buses you find in other parts of the country. For that reason, both options are similar. They take 4 to 5 hours and drop you at a bus station in Bagan. Neither offer hotel pickup or drop-off.

Going by train is an option but it's a rather slow one and not particularly comfortable. The trains depart from Mandalay Central via Myanmar Railways in the evening and arrive around sunrise the next morning, dropping you off at the train station in Bagan. The view out the window is scenic but the trains themselves are bumpy and not ideal for anyone with sensitive stomachs.

Traveling by boat is the slowest way to get between destinations but it's also one of the most scenic. You will wind along the Irrawaddy River where you'll pass small fishing villages and drift by decorative pagodas. All of the trips start before dawn and end after dark, allowing you to watch both sunrise and sunset from the boat. Just be sure to call ahead of your trip to check schedules because many cruise operators shut down for part of the season when the river gets too dry.

For first-time visitors to Myanmar looking to discover the country...