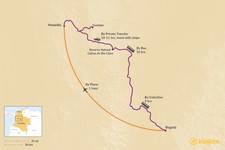 The distance between two of Colombia's largest cities, Bogotá and Medellín, is 260 miles (419 km). The easiest way to make the trip is to fly, which takes about an hour. Going by car is also an option—the route takes significantly longer (over ten hours) but this is a great way to see the hilly, scenic countryside and there are a few noteworthy stops you can make along the way. Private transfers are recommended over self-driving, though it can be an expensive option at this distance.

Buses run from Bogotá to Medellín numerous times every day and are an economical way to go; you can expect at least ten hours on the road. There are also shared vans called colectivos mainly used by locals—if you choose to go this way, prepare for a crowded, bumpy ride.

If you have more time in the country, consider this 9-day itinerary—it includes both Bogotá and Medellín, along with visits to Coffee Country and Cartagena.

Direct flights between Bogotá and Medellín are about an hour long. In Bogotá, the major airport is El Dorado International Airport (BOG). Nearly all international and domestic flights will arrive and depart from here. Colombia’s main domestic airline is called Avianca, which offers domestic routes to all major cities. The airport is about 9 miles (16 km) from the center of town, and a private transfer or taxi is your best bet for getting there.

Medellín has two airports, and most visitors fly into Aeropuerto Internacional José María Córdova (MDE). MDE offers flights from Bogotá, other cities in Colombia, and major international destinations. The airport is located in nearby Rio Negro, about 21 miles (35 km) from Medellín's city center. From the airport, you can take a taxi directly to most hotels in the city for a flat fee or hire a private transfer.

From either airport, you can also use a ride-share app like Uber. Uber is not actually legal in Colombia, but it's regularly used by travelers and locals alike. Keep in mind that drivers are notorious for getting lost (especially in Medellín) and police often target airports to ticket drivers.

Going overland from Bogotá and Medellín takes over ten hours—and is an expensive option at this distance—but having a car and driver gives you the freedom to explore the route between Bogotá and Medellín. You can certainly make the drive in one day, though many travelers opt to take their time, spending the night at one of the pleasant towns along the way.

Consider a stop in Reserva Natural Cañon de Río Claro, a beautiful nature preserve that offers tours and outdoor activities. This private nature reserve features caves, white-water rafting, swimming, and hiking. It’s a well-known spot for birdwatching as well, and it features some nice accommodation if you want to break up the road trip with an overnight stay.

Another point of interest before reaching Medellín is El Peñon de Guatape, a spectacular viewpoint with 360-degree views of the landscape. You can also visit the nearby village of Guatape for a colorful portrait of rural life.

Bus service runs regularly throughout the day usually every half-hour between Bogotá and Medellín. Most buses leave from the main terminal in Bogotá, which is aptly named La Terminal, located in the Salitre neighborhood about 3 miles (5 kilometers) west from the city center. It’s one of the least expensive ways to make the journey, but it can be very slow depending on traffic. Plan to devote about ten hours on the bus to get there. Some of the more high-end bus companies like Expreso Bolivariano include amenities like wifi, power outlets, a restroom on board, air-conditioning, and usually a movie at least to help pass the hours.

If you're looking for a budget-priced adventure, choose a colectivo, a (typically overcrowded) shared van widely used by locals. Colectivos dart quickly around traffic, so you’re likely to arrive in Medellín in nine hours or less—unless it breaks down on the side of the road, a somewhat common occurrence. Keep in mind that colectivos depart only when they are full, and be prepared for a bumpy ride.

You can traverse the 83 miles (133 km) that stand between Cartagena and...
Getting Around Colombia

From Medellín to the green mountains of Colombia's coffee region and...

Celeste H.
California, United States
"Our trip to Colombia was incredible!!! Our itinerary included Medellin, Pereira and Cartagena. Right from the get go Margarita was attentive, available to..." read more
Traveled to Colombia as a family in November, 2022

Kelly S.
Michigan, United States
"As a woman traveling alone to a remote part of Colombia I decided to use an agency. I have to tell you KimKim was excellent! Wendy made me feel more than con..." read more
Traveled to Colombia solo in October, 2022

Bert S.
Arizona, United States
"A Great Trip, Wonderful Hotels and tours. Everyone had a wonderful time. The tour guide Javier did a great job showing us around. Would recommend Kimkim serv..." read more
Traveled to Colombia as a family in September, 2022

Adam D.
Texas, United States
"This is a little belated, but the whole itinerary that Nathalie planned was just incredible. All experiences were very authentic and unique. It felt like the..." read more
Traveled to Colombia as a group in December, 2018

Amny G.
New Jersey, United States
"Our trip experience in Colombia was amazing. Michael created literally the perfect itinerary. Alex our tour guide in bogota was so knowledgeable, caring, an..." read more
Traveled to Colombia as a family in September, 2022