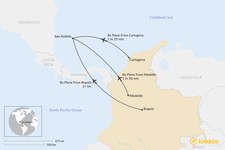 Non-direct flights from other surrounding Colombian cities are added during certain seasons and often have layovers in Bogotá or Panama. This island’s airport is a very small airport centered near the town, making it very easy to reach most accommodation locations by foot. If not, taxis are readily available outside the terminal, just be sure to use your negotiating skills for a reasonable price.

Soak in everything that San Andrés & Providencia has to offer on this 6-day itinerary, offering a perfect mix combination of hiking, diving, and relaxing activities paced for a slow island way of life.

Duration: a little over 2 hours

From the coastal city, the flight from Cartagena’s Rafael Nuñez International Airport (CTG) is the shortest flight from Colombia to the island. It’s a quick 1 hour and 25 minutes.

How to Get from Salento to Pereira

The road from Salento to Pereira is only 24 miles (39 km), meaning you...
Getting Around Colombia

William K.
New York, United States
"We had a wonderful trip. Our guides and drivers were extremely knowledgeable and helpful . The boutique hotels were very pleasant and the staff at each hotel..." read more
Traveled to Colombia as a couple in January, 2023

Rima M.
Connecticut, United States
"My daughter and I had a great time in Colombia, visiting the small colonial towns around the beautiful mountains of Antioquia. The whole trip went very smoot..." read more
Traveled to Colombia as a family in January, 2023

Whitney B.
Florida, United States
"We had such an amazing trip to Colombia. Everything was planned down to the minute, we had reliable transportation and guides and drivers the entire time. Ev..." read more
Traveled to Colombia as a couple in December, 2022

Yifan L.
United Kingdom
"Actually, Colombia was not my main destination, it was more of an add-on for my trip to Brazil. However, once I stepped into this fantastic realm, I am blown..." read more
Traveled to Colombia solo in December, 2022
D
David U.
Canada
"We had an incredible family vacation in Columbia with our guides Alba (Medellin) and Santiago (Bogota). Felipe was incredibly helpful in arranging an itinera..." read more
Traveled to Colombia as a family in December, 2022
Create your custom-made trip to Colombia
Get Started