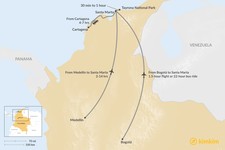 Found in Northern Colombia, Tayrona National Park is most often accessed via nearby Santa Marta. From the entrance, you can catch the shuttle bus to venture further into the park or walk a few kilometers to your accommodation. If you are headed from Riohacha or Palomino, you’ll want to get a bus headed in the direction of Santa Marta and depart near the park entrance.

If you want to explore the coast at length, consider this 8-day itinerary. It’s packed with activities, including hiking through Tayrona, visiting a coffee farm, joining a fishing trip, and then relaxing on the stunning Rosario Islands.

From Bogotá to Santa Marta

Your best option from Bogotá to the National Park is to fly to Santa Marta. Several non-stop domestic direct flights leave from El Dorado International (BOG) Airport in Bogotá to Santa Marta, the city closest to Minca with an airport.

Direct flights are around an hour and a half in duration. Simón Bolívar International Airport (SMR) is the airport serving Santa Marta. The airport is located 10 miles (16 km) south of downtown Santa Marta. Taxis are readily available for hire in the ground transportation area of the airport. There are no meters, so negotiate a fare with the driver before starting your journey., there is an inexpensive bus service available from the airport terminal to Santa Marta.

From Medellín to Santa Marta

The best option to get from Medellín to Tayrona National Park is to fly to Santa Marta. There are two airports in Medellín; Jose Marie Cordova Airport (MDE) and Enrique Olaya Herrera (EOH) Airport. The airport Jose Marie Cordova Airport (MDE) offers direct routes to the city of Santa Marta, with direct flights at 1 hour and 15 minutes. Enrique Olaya Herrera Airport (EOH) in Medellín offers multi-city stops with most layovers in Bogotá, so MDE is a better option for flying.

As for buses, there are no direct routes that leave directly to Medellín to Tayrona National Park. Instead, you’ll want to catch the buses from Medellín from the Terminal del Norte bus station to Santa Marta. This is a long 13 plus hours of travel.

Learn more about traveling from Medellín to Santa Marta

From Cartagena to Santa Marta

Duration: 4 to 7 hours to Santa Marta

There are no direct flights from Cartagena to Santa Marta or Barranquilla so going by public bus or a shuttle are the best options. The Cartagena to Santa Marta route usually takes 5 to 6 hours via bus. Door-to-door shuttle services are also available that will take you directly to the National Park. Private transfers are recommended over self-driving, though it can be an expensive option at this distance.

Learn more about traveling from Cartagena to Santa Marta

From Santa Marta to Tayrona

Options from Santa Marta are taking a private transfer or taking a boat. Private transfer takes about half an hour, while the trip by sea lasts about 40 minutes and leaves you directly in Cabo San Juan del Guia.

You can also take the public bus from the Santa Marta terminal or from behind the central market in Santa Marta. They leave roughly every half hour. Buses operate all day and will take you directly to the park’s entrance. You'll arrive at the entrance called “El Zaíno” between 45 minutes to one hour. From El Zaíno, catch the shuttle bus to venture further into the park or walk a few kilometers to your accommodation.

Salento is only 154 miles (248 km) away from Medellín, making it an easy...
Getting Around Colombia

Experience the highlights along Colombia's northern coast in this active...

This rugged 10-day trip is ideal for those who want to focus on nature...

From the colonial city of Cartagena to the ancient ruins of the Lost...

B
Blesilda D.
California, United States
"Trip selections were excellent. Felt like I saw and experienced the best of Colombia. People were nice and friendly. Guides and drivers were knowledgeable an..." read more
Traveled to Colombia as a group in August, 2022

Amy F.
California, United States
"Trip of a lifetime! My husband and I decided to go to Colombia for our 15 yr anniversary. We didn’t know much about the country and decided to try KimKim. Th..." read more
Traveled to Colombia as a couple in July, 2022

Jen D.
California, United States
"Our trip to Colombia was amazing. I whole heartedly recommend this trip to anyone seeking an interesting, inspiring and fun vacation. Wendy was a fabulous ..." read more
Traveled to Colombia as a couple in July, 2022

Jessica A.
Illinois, United States
"What an incredible experience! Michael was attentive and listened to my needs on the trip. Each guide, Jose and Roberto, were kind, accommodating, and kno..." read more
Traveled to Colombia as a couple in July, 2022
E
Elizabeth Z.
Maryland, United States
"We LOVED our time in Cartagena and really appreciated the care Michael took to make sure each detail was thought out. The Armeria Real hotel suited our famil..." read more
Traveled to Colombia as a family in July, 2022

Carolyn K.
Canada
"We love Colombia! It was a romantic, elegant cultural experience that gave us 10 days of non stop fun. Margoth was incredible. She planned a trip that was..." read more
Traveled to Colombia as a couple in July, 2022
E
Eva W.
Oregon, United States
"We had a great trip to Colombia. Both Felipe and Margoth helped us during the entire vacation and took care of everything from start to finish. All was outs..." read more
Traveled to Colombia as a family in June, 2022

Sangini S.
Virginia, United States
"We had a remarkable family trip to Colombia recently. Michael from Chaska Travel was incredibly flexible, attentive to details, and prompt in getting us info..." read more
Traveled to Colombia as a family in June, 2022
Create your custom-made trip to Colombia
Get Started