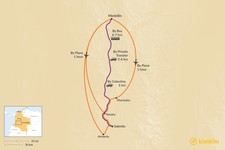 Salento is only 154 miles (248 km) away from Medellín, making it an easy side trip that takes five to six hours one way.

Salento is fairly easy to get to. A flight to the nearby cities of Pereira, Manizales, and Armenia takes under one hour via a direct flight. Taking a private transfer to stop and visit the nearby attractions of the Coffee Region is recommended over self-driving. Buses and colectivos are also available, but are not recommended if you are sensitive to motion-sickness.

To see the best cities that Colombia has to offer, consider this 14-day itinerary. This tour offers the perfect combination for city dwellers and nature lovers alike. You’ll spend time in the most popular Colombian cities, including Bogotá, Medellín, and Cartagena. Each city has its own distinct culture and flavor. To balance it out, you’ll also visit a coffee farm in Salento, hike through a rainforest, and spend time on the beach while visiting the stunning beaches and rainforests of Tayrona National Park.

By Plane to Pereira, Manizales, or Armenia

There is no airport in Salento but you can fly to towns nearby and then take a bus to Salento from there. Medellín’s Olaya Herrera (EOH) offers non-stop flights to the nearby towns Pereira, Manizales, and Armenia. All direct flights are under one hour. There are also multiple buses that depart throughout the day for Salento from these major cities in the coffee region.

Private transfers are recommended over self-driving for this route but it can be expensive. Having a car and driver gives you the freedom to explore the route between Solento and Medellín. A guide and driver are a good idea in this area as public transportation to the coffee farms and nature reserves is infrequent or non-existent. You can certainly make the drive in one day, though many travelers opt to take their time and stop at attractions along the way.

There are small buses depart daily for Salento from Medellín’s Terminal de Transportes del Sur in Medellín. Buses usually take 6 to 7 hours to arrive in Salento and it’s a cost-effective way of travel. Companies like Flota Occidental have buses that normally pass through Pereira before heading to Salento.

Another alternative mode of transport from Medellín is to take a colectivo to the region. These are mini vans that travel daily to the cities around the region. These trips can be hard for those that are sensitive to motion-sickness as the roads and driving can be a little rough.

How to Get from Salento to Pereira

The road from Salento to Pereira is only 24 miles (39 km), meaning you...
Getting Around Colombia

From Medellín to the green mountains of Colombia's coffee region and...

A
Amit S.
Illinois, United States
"Thanks to Michael and the Kim Kim team for the amazing support during our trip to Columbia. Despite lot of travel / logistical issues - Michael was able to ..." read more
Traveled to Colombia as a family in December, 2022

Rima M.
Connecticut, United States
"My daughter and I had a great time in Colombia, visiting the small colonial towns around the beautiful mountains of Antioquia. The whole trip went very smoot..." read more
Traveled to Colombia as a family in January, 2023

Whitney B.
Florida, United States
"We had such an amazing trip to Colombia. Everything was planned down to the minute, we had reliable transportation and guides and drivers the entire time. Ev..." read more
Traveled to Colombia as a couple in December, 2022

Yifan L.
United Kingdom
"Actually, Colombia was not my main destination, it was more of an add-on for my trip to Brazil. However, once I stepped into this fantastic realm, I am blown..." read more
Traveled to Colombia solo in December, 2022
D
David U.
Canada
"We had an incredible family vacation in Columbia with our guides Alba (Medellin) and Santiago (Bogota). Felipe was incredibly helpful in arranging an itinera..." read more
Traveled to Colombia as a family in December, 2022

Freya S.
United Kingdom
"The trip plan David developed for us involved travelling through three diferent parts of the country, Tayrona National Park, the Guajira and the Orinoco, an..." read more
Traveled to Colombia as a couple in December, 2022
B
Brian D.
South Carolina, United States
"Kim Kim, Aracanto, and Margoth planned a great trip for our family to Colombia. We enjoyed Cartagena, Tayrona, coffee country, and Bogota. We had excellent..." read more
Traveled to Colombia as a family in December, 2022

Stacey S.
Oregon, United States
"We had a great time in Columbia Margoth planned a great trip would like to stay longer next time to see more of the beautiful Columbian nature and culture ..." read more
Traveled to Colombia as a family in September, 2022
Create your custom-made trip to Colombia
Get Started