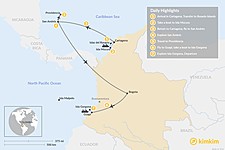 Beyond the untamed landscapes and Spanish Colonial heritage of Colombia's mainland, coral islands beckon. For visitors looking beyond the country's highlights, these gems offer a one-of-a-kind experience, especially for beachgoers, restless travelers, and scuba divers who yearn for off-the-beaten-path adventure.

For a large country with both Caribbean and Pacific coasts, Colombia has relatively few offshore islands. But the three island “groups” it does have offer rewarding experiences. The Islas del Rosario, for example, with their prime snorkeling spots, make a good day trip from Cartagena (here are a few more). To the far north, the twin isles of San Andrés and Providencia—ringed by long stretches of white-sand beaches—are popular with Colombian vacationers, but they're also distinct for their Afro-Caribbean Raizal culture and exude colorful Caribbean charm. And off the Pacific coast, rugged Isla Malpelo is renowned as a premier scuba-diving site while Isla Gorgona is a venue for whale watching.

If you're gaga for islands, you might plan on visiting all three clusters, but note that only the Islas del Rosario and the adjacent Archipiélago de San Bernardo can easily be toured isle-to-isle by boat. San Andrés and Providencia lie off the coast of Nicaragua and are a 90-minute flight from Cartagena, while Isla Malpelo and Gorgona are located in Colombia's southern Pacific, with limited means of access.

You may wish to pick and choose which of these islands to visit individually. But if linking all of them in a single trip appeals to you, then this is the suggested itinerary. The island-hopping route below assumes you’ve already enjoyed a day or two exploring Cartagena—your embarkation point. Here are some great things to do in Cartagena while you're there, and for the city's best boutique hotels, check out this article.

Three-quarters of Colombia’s coral reefs are found here, so be sure to pack your snorkel gear before arriving. A highlight is snorkeling around the plane wreck, just offshore of Pablo Escobar’s now derelict vacation mansion. The activities desks at the hotels here offer snorkeling trips and usually can provide fins and masks. Combine your snorkeling with a visit to the Oceanário, a seawater aquarium with tanks displaying rays and marine turtles. Also, dolphins perform leaps and other tricks during scheduled shows.

Another excursion is to explore the mangroves on a canoe trip. Then, after sundown, seek out the lagoon full of phytoplankton. Slip into the water for a swim and you’ll be mesmerized as the lurid green bioluminescence envelops you in a spectral glow. Go with a guide, arranged through your hotel, as finding it on your own at night isn’t easy and is risky.

Regarding transport, a public ferry operates daily from Cartagena’s Muelle De La Bodeguita around 9:45 am. Private boat-taxis also depart the marina every morning. Arrange with the captain to be dropped off at your lodgings on Isla Grande, or the nearest wharf. A small fee is charged for entry to the marine national park.

Plan your trip to Colombia
Customize your trip with help from a local travel specialist.
Plan Your Trip

On day two, make an excursion to palm-studded Isla Múcura (also known as San Onofre), located about one-hour south of Isla Grande. It’s the principal isle of the 10-island Archipiélago de San Bernardo. There are a handful of hotels here and a resort overlooking a cove. Here you'll find all-inclusive services and many watersports and nature hikes. While on Múcura, be sure to take an excursion to tiny Isla Santa Cruz del Islote, which is crammed end to end with fisherman’s huts. It's supposedly the most densely populated island in the world.

A private boat serving Hotel Punta Faro (the biggest resort on the island) departs Cartagena at 11:30 am and returns from Isla Mucura at 9:30 am.

In the morning, return to Cartagena for a flight 370 miles north to the island of San Andrés. The twin isles of San Andrés and the much smaller Providencia were populated by the English and their Jamaican slaves in 1631, then ceded to Spain in 1782 followed by Colombia after its independence. These days it's a popular vacation spot for foreigners and Colombians alike. Because of this, you’ll need to buy a tarjeta de turismo (tourist card) upon arrival for entry to the island.

Arriving in the afternoon, check into your hotel and spend the balance of the day relaxing and exploring the town's Malecón (shorefront) boulevard. Most lodgings are in the sole town (also called San Andrés), located on the north of the island, but you’ll find plenty of charming B&Bs sprinkled around. If you want to journey along the 19-mile road that encircles the island, it's best to rent a golf cart or moped. You might also spend an afternoon scuba diving, and be sure to enjoy snorkeling on a boat excursion to islas Johnny Cay or Acuario.

One-third of the population of San Andres and Providencia are Raizals— Protestant descendants of African slaves—who speak an English-derived creole language. Some are Rastafarians, and their music of choice is reggae. It’s fun to stop at a church here, and they're often packed to the gills. An interesting cultural spot is Casa Museo Isleña, a museum dedicated to the Raizal heritage.

Tiny, mountainous, teardrop-shaped Providencia—or "Old Providence" to Raizals—is a mere 20-minute flight from San Andrés. This is the heartland of Raizal culture and one of the main reasons to visit. Beaches are few and, compared to San Andrés, unimpressive. However, there are several sites of interest: most of which are accessible by hiking. Don't miss Fort Warwick, reached via a short uphill trail from the tiny town of Santa Isabel.

The few hotels on the island cluster around Southwest Bay. Try to time your arrival for Saturday afternoon, when locals have horseback races on the sands. Providencia is world-renowned for diving: Most sites are within a 10-minute ride from Southwest Bay. The highlight is El Planchón, which features a German shipwreck. Non-divers might explore Parque Nacional Natural Old Providence & McBean Lagoon, a realm of mangrove and turquoise lagoons teeming with wildlife. You can rent a canoe in the hamlet of Maracaibo.

Now for some off-the-beaten-path adventure. Your day will include flying from Providencia to San Andrés, then Bogotá and on to Guapí, on the country's southern Pacific coast, for a boat ride to Isla Gorgona. Only recently reopened to visitors, this maritime national park served as a prison island from 1960-'84. The prison ruins are fascinating, plus trails lead into a rainforest teeming with monkeys, sloths, and snakes. But the main draw is the surrounding waters abounding with fabulous coral reefs. Marine turtles and humpback whales congregate here by the score. In fact, Gorgona is one of the world’s premier destinations for viewing humpback whales.

An alternate to Isla Gorgona, for experienced divers only, is Isla Malpelo. Part of the Galapagos chain of islands, this rugged island pokes up out of the Pacific at the heart of Sanctuario de Fauna y Flora de Malpelo—a UNESCO World Heritage Site acclaimed for its sensational scuba diving. Huge schools of hammerhead sharks are one of the main draws. So too are whale sharks, plus the world's largest colony of masked boobies. Getting here isn't easy. The boat journey from the Pacific port of Buenaventura takes 36 hours. Far better is to join a scheduled dive trip.

You'll depart the island for Guapí and your onward flight. Planning on spending more time on Colombia's coast? Be sure to take a look at the Ultimate Guide to Tayrona Park, and consider this five-day itinerary that includes both Cartagena and Tayrona.

Best of the Pacific Coast

This 9-day Colombian adventure blends culture and cuisine with a dash of...

The Rosario Islands consist of over 20 small coral islands, including...
Getting Around Colombia