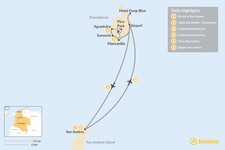 These twin islands off the coast of Nicaragua actually belong to Colombia, making it a multi-cultural beach trip like no other. Start in San Andrés, the more developed of the two isles, where you'll have time to experience Raizal culture before heading to Providencia for three days of hiking, diving, and slow island life. Finish back in San Andrés for one more Caribbean sunset and a reggae show.

Welcome to San Andrés! Off the coast of Nicaragua, the twin isles of San Andrés and the much smaller Providencia were populated by the English and their Jamaican slaves in 1631, then ceded to Spain in 1782, followed by Colombia after its independence. These days it's a popular vacation spot for foreigners and Colombians alike.

Upon arrival, you'll transfer to your hotel and spend the rest of the day relaxing and exploring the town's Malecón (shorefront) boulevard. Most of the action is centered around the sole town of the same name, located on the north shore, but you're free to go beyond. If you want to journey along the 19-mile road that encircles the island, it's best to rent a golf cart or moped. You might also spend the afternoon hitting one of the island's beaches and swimming in the crystal clear water before dinner. In fact, the archipelago of San Andrés and Providencia—declared a marine biological reserve to protect its biodiversity—has some of the most beautiful beaches in Colombia and the Caribbean.

Languages that are spoken here include Creole, Sanadresano, Spanish, and English, and there's a strong culture mixing Anglo-Caribbean Raizal, Colombian, and reggae. You'll have plenty of options for creole food, live music, and dancing in San Andrés, if you so choose.

This morning, after breakfast in San Andrés, you'll head to the airport for your departure to neighboring Providencia—a short flight of about 20 minutes.

Upon arrival at Providencia airport, you will be transferred to your accommodations for the next three nights. The island's few hotels seem to cluster around Southwest Bay, which is where you'll be staying. Once you're settled, take the rest of the day to relax and walk around. This small, tear-drop-shaped island is much more traditional than San Andrés, and by law, buildings are limited to two stories and must be built in the local style. In addition, the island has more wildlife, vegetation, and pristine beauty including secluded beaches and lakes.

For a land activity, there are several sites of interest, most of which are accessible by hiking. Don't miss Fort Warwick, reached from the tiny town of Santa Isabel through a short uphill hike. Also, try to time your arrival for Saturday afternoon when locals have horseback races on the sands of the Southwest Bay.

After breakfast at your hotel this morning, you'll have the whole day to explore the island as you please. The main activity at Providencia inland is kicking back and enjoying the beaches. You can head to these local favorites and chill the day away at Bahía Suroeste, Bahía Aguadulce and Bahía Manzanillo.

Providencia is also world-renowned for diving and this is one of the main reasons why people come here. You can learn how to dive and sign up for a series of excursions that take advantage of the clear water and stunning reef life. Most dive sites are within a 10-minute ride from Southwest Bay, and the highlight is El Planchón, which features a German shipwreck.

Snorkelers for their part might explore Parque Nacional Natural Old Providence & McBean Lagoon, a realm of mangrove and turquoise lagoons teeming with wildlife. This national park is noteworthy because it protects a portion of the third-largest barrier reef in the world. You can also rent a canoe and paddle in the calm hamlet of Maracaibo.

Today, you'll have another full day to explore the island!

Before you hit the beach for a swim, work up a sweat by heading to the mountains for a hike to Pico Natural Regional Park, where you'll have an exceptional view of the Caribbean.

For those interested in culture, one-third of the population of San Andres and Providencia are Raizals— Protestant descendants of African slaves. Check out the Casa Museo Isleña, a museum dedicated to the Raizal heritage. It’s also fun to stop at a church during a service for live music and singing, as they're often packed to the gills.

This morning, after breakfast at your hotel, you'll have some free time to hit the beach or walk around the island before you head to the airport.

In the afternoon you will check out of your hotel and take a flight back to San Andrés. Upon landing, you'll be transferred to your hotel for your check-in where you'll have one more night to take in a stunning Caribbean sunset.

It's time to say goodbye to San Andres! At the designated time, you'll drive to the San Andres airport for your departure home. Safe travels!

Anyone who thinks you can't get to the heart of Cartagena, Colombia in...

In this itinerary, you'll embark on a high-altitude 4-day trek into Los...
Colombia 6-Day Tours & Itineraries

Explore Cartagena’s colonial architecture by foot, partake in its rich...

This tour takes you off the beaten path and truly epitomizes the...
Colombia Tours & Itineraries

Hike around a coffee farm, take a cooking class in Cartagena, dine in...

Create lifelong memories on this 9-day family-friendly tour around...

Journey deep into the jungles of northeastern Colombia on this rugged...

Home to 20% of the world's avian species, Colombia is a must-visit for...

The distance between Cartagena to the Tayrona Park entrance is about 155...
Getting Around Colombia

Sangini S.
Virginia, United States
"We had a remarkable family trip to Colombia recently. Michael from Chaska Travel was incredibly flexible, attentive to details, and prompt in getting us info..." read more
Traveled to Colombia as a family in June, 2022

Amber A.
California, United States
"Overall we had an amazing experience on our trip. Everything was well organized and planned with detail which was a relief. I was surprised to have the same ..." read more
Traveled to Colombia as a couple in June, 2022

Elise A.
Florida, United States
"We just returned from a magnificent vacation in Colombia planned by the amazing local specialist, Wendy. Wendy planned the perfect itinerary for us in Medel..." read more
Traveled to Colombia as a couple in June, 2022