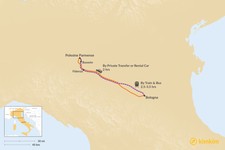 If your culinary tour of Italy involves a side trip from Bologna to Polesine Parmense, famous for its museum dedicated to cured pork, you can make the 85-mile (136 km) journey via a rental car or a combination of trains and buses. Driving is the fastest way to make the trip, and allows you to see some of the pastoral Emilia-Romagna countryside northwest of Bologna.

If your budget allows, a private transfer is a relaxing and stress-free way to reach Polesine Parmense from Bologna. Since Polesine is small and you're most likely traveling there to visit the Culatello Museum or dine at Antica Corte Pallavicina, which has a Michelin-starred restaurant, it might make sense to have the driver wait while you tour or eat, then return to Bologna the same day or evening

Drivers with rental cars will start on the SS64 ring road that surrounds the entire city. (In front of the station, it's called Viale Pietro Pietramellara, but also is signposted SS64.) Follow your GPS directions closely from here, as you'll be switching between a number of (well-marked) highways along the way. Once you're close to Polesine Parmense, exit right onto Via Roma if you are heading straight to Antica Corte Pallavicina and the Museo del Culatello, the town's main attractions.

Walk out of Busseto station and cross the piazza and Viale Alfonso Pallavicino to find the local bus 2106 that will connect you, after 14 stops, to Polesine Via Roma, where you'll get off the bus. Be aware that not all trains headed to Piacenza stop at Fidenza – make sure you get on one that does.

With 282 miles (453 km) separating Venice from the region of Puglia,...
Getting Around Italy

If sitting on a Tuscan hillside winery with a glass of Chianti, kneading...

This 8-day trip is perfect for travelers who want a packed itinerary but...

Eat and drink your way through the incredible cuisine of Northern Italy...