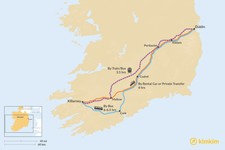 Killarney—the scenic gateway to Killarney National Park—is 191 miles (307 km) southwest of Dublin. The fastest way to make the journey is by train. With just one connection in Mallow, you’ll be in Killarney in 3.5 hours.

A slightly longer but more convenient option is to go by rental car or private transfer, which takes about four hours. Although the distance is long, the route follows major highways, making the trip easy and straightforward. If you’re interested in extending your trip further, this 8-day hiking itinerary around the Kerry Peninsula highlights one of the country’s most scenic regions.

Although it's the longest option, the regional bus is another alternative. With one required connection, you’ll arrive in Killarney in about 6-6.5 hours.

The train is the fastest option and requires just one 10-minute connection in the town of Mallow. Trains leave regularly from Dublin’s Heuston station—on the west end of the city—and arrive in Killarney in about 3.5 hours. The route runs southwest through Ireland’s picturesque countryside, full of rolling green hills and small towns in the distance.

Although slightly longer than the train, another option is to make the journey by car—rental or private transfer. The two cities are connected by major highways, meaning the route is fairly straightforward, even if you're not familiar with driving in Ireland.

As you leave Dublin—via highways M50 and N7—you’ll head southwest toward the towns of Kildare and Portlaoise. Kildare is a good place to stop for a coffee. It’s also home to the country’s famous horse races.

Eventually, you’ll veer left onto highway M8 and pass through Cashel—a great stopping point for a coffee or lunch. Some other interesting sites along the way include The Rock of Dunamase—the historical ruins of Dunamase Castle with scenic views of the Slieve Bloom Mountains—and The Rock of Cashel—cathedral ruins from the 12th century. Both are set just off the highway.

After Cashel, you’ll merge right onto highways N73/N72. This part of the drive remains flat; but as you near Killarney, you’ll start to see the silhouettes of MacGillycuddy's Reeks, Ireland's tallest mountain range.

The longest option is the regional bus, which is operated by Bus Éireann. Much like driving, the bus follows major highways. However, the route requires numerous stops and one connection in either Cork or Limerick. Keep in mind that connection times can be long—at least 45 minutes. The bus stations are central in both cities, so you can easily grab some lunch as you wait for your connection.

How to Get from Galway to Donegal

The scenic county of Donegal sits in Ireland’s rural, northwest region....
Getting Around Ireland

Hike around the Ring of Kerry at your own pace with this 11-day...

Explore the southwest corner of Ireland at your own pace on this 8-day...

Self-Drive Ireland: Dublin to the Cliffs of Moher - 7 Days

Explore the magic of Ireland on this week-long self-drive adventure,...

See the best of southwestern Ireland and Dublin on this self-driving...

Carla T.
Colorado, United States
"Sean was absolutely amazing. Very knowledgeable in the history of Ireland, up to date politically, very acquainted with Ireland and areas we were interested..." read more
Traveled to Ireland as a group in June, 2022
L
Lorraine B.
California, United States
"I can't speak highly enough about the itinerary that the Ireland Walk Hike Bike team created for us. Dean created a custom 13-day self-drive tour for me and ..." read more
Traveled to Ireland as a couple in June, 2022

Amber S.
Ohio, United States
"Our accommodations were great and our Guide, Denis Beakey, was AMAZING!!! Extremely knowledgeable and pleasant. He was a five star guide for a five star expe..." read more
Traveled to Ireland as a group in June, 2022
Create your custom-made trip to Ireland
Get Started