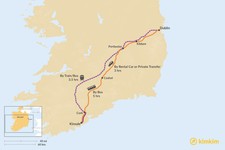 Set near the southern coast of Ireland, the colorful harbor town of Kinsale is 176 miles (284 km) from Dublin. Mostly connected by major highways, the most convenient way to reach Kinsale from Dublin is by car, a journey of about three hours. If you have a few extra days to extend your trip, this 8-day itinerary highlights both Dublin and Cork.

You can also make the trip by public transportation, which requires a connection in Cork. If you make the first leg via train and switch to the bus, the journey will take about 3.5 hours. If you'd rather just stick to the regional bus for the entire route, you'll reach Kinsale in five hours.

The fastest and most convenient way to get from Dublin to Kinsale is by rental car or private transfer. The two are connected by major highways, making the drive fairly straightforward. As you leave Dublin from the west—via highways M50 and N7—you’ll head southwest towards Kildare. Kildare is a good place to stop for a coffee and one of the country’s famous horse races.

Eventually, you’ll take the M7/M8 highways all the way to Cork, a great city to explore for an hour or so. Other interesting stopping points include The Rock of Dunamase—the historical ruins of Dunamase Castle with scenic views of the Slieve Bloom Mountains and The Rock of Cashel, cathedral ruins from the 12th century.

After you pass through Cork, you’ll veer onto road R600 to Kinsale. This is a smaller two-lane road that curves through picturesque green hillsides and small towns.

Public transportation is a great alternative to driving, especially if you combine the train with the bus. Trains leave regularly from Dublin’s Heuston station—on the west end of the city center—and arrive in Cork’s Kent station in about 2.5 hours. The route curves northwest around the Wicklow Mountains, passing through the town of Kildare before heading southwest towards Tipperary. Grab a seat on the left side of the train to catch a glimpse of the hills, if the weather allows.

Once you arrive in Cork, a 10-minute walk will get you to Parnell Place—Cork’s bus station—where you can grab a regional bus to Kinsale.

The longest option is the regional bus, which is operated by Bus Éireann. Much like driving, the bus follows the same major highways but requires numerous stops and a 20-minute connection in Cork. There are about six daily departures, leaving every couple of hours. Although tickets can be bought on board, it's best to book in advance—online or at the bus station—during the busy tourist season.

How to Get from Dublin to Killarney

How to Get from Dublin to Cork

The distance from Dublin to County Clare is about 147 miles (237 km)....
Getting Around Ireland

Take travelers of all ages around the Emerald Isle with this week-long...

Self-Drive Ireland: Dublin to the Cliffs of Moher - 7 Days

Explore the magic of Ireland on this week-long self-drive adventure,...

See the best of southwestern Ireland and Dublin on this self-driving...

Get ready to immerse yourself in Irish culture, history, and landscapes...

Quoc Dien T.
Massachusetts, United States
"An amazing experience from beginning to end. Rachel put together a perfect itinerary adapted to our needs in a very short period of time." read more
Traveled to Ireland as a family in December, 2022

Libby B.
Nebraska, United States
"We are so thrilled with the trip Austin planned and organized for us! We were struggling to plan on our own logistically and he put together an itinerary tha..." read more
Traveled to Ireland as a couple in December, 2022

Mary K.
Indiana, United States
"I can't say enough good things about kimkim and Dean, our local specialist. We had such a wonderful time. Our accommodations were all lovely and run by helpf..." read more
Traveled to Ireland as a couple in October, 2022

Firoza P.
California, United States
"Dean was very helpful with the planning the trip. He answered all my questions and gave great suggestions for small changes need to hotels and accommodating ..." read more
Traveled to Ireland as a couple in September, 2022

Kaylyn R.
New Hampshire, United States
"We did a 10 day/9 night self drive tour from Dublin-Laragh-Cork-Killarney-Dingle-Doolin-Galway and it was lovely! The accommodations were all went smoothly a..." read more
Traveled to Ireland as a couple in September, 2022

Ray M.
Arizona, United States
"We feel the last two days of our trip were not productive. We could have gone to Belfast or seen more areas with our time When we returned the car, we tho..." read more
Traveled to Ireland as a couple in August, 2022

Julie H.
Minnesota, United States
"We spent nine days in Ireland with everything planned and booked by Austin. It was a great trip! The location of all of our hotels was perfect. He had great ..." read more
Traveled to Ireland as a group in September, 2022

Molly F.
Kentucky, United States
"The trip was fabulous. The accommodations were terrific. Steve provided excellent GPS directions. " read more
Traveled to Ireland as a group in August, 2022
Create your custom-made trip to Ireland
Get Started