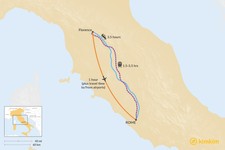 If you’ve taken in the Renaissance charms of Florence and are ready to visit Rome or catch your flight home, there are a few ways to make the roughly 175-mile journey.

Italy’s two train companies offer a full schedule of daily departures between the two cities, with trains running every 15-30 minutes. Driving between Florence and Rome takes about 3.5 hours if you stay on the autostrada, the Italian equivalent of an interstate highway. There are also several flights a day connecting the two cities.

In Florence, Santa Maria Novella station, abbreviated Firenze S.M.N. on train schedules, is the city’s transport hub and the station from which most trains to Rome depart, bound for either Termini or Tiburtina station. Termini is the closest station to the historic sections of Rome, and the departure point for express trains to the Fiumicino Airport.

Trenitalia, the Italian national rail service, as well as private train company Italo both offer high-speed, non-stop trains from Florence to Rome. Trenitalia’s high-speed trains are called Frecciarossa, while its slower trains are called Regionale or Regionale Veloce. These take around 3 hours, 30 minutes to reach Rome, as they make several stops along the way. They’re cheaper than Frecciarossa trains, so good for travelers on a budget.

Italo offers only non-stop trains between the two cities, with prices comparable to the Frecciarossa. Regardless of the train you choose, you should buy your tickets in advance, both to secure a better price and to save time at the station.

If you’ve rented a car or otherwise have access to a vehicle, you may want to consider driving from Florence to Rome. Driving in the historic center of Florence puts you at great risk of getting a traffic ticket, as many areas are open only to local traffic. Driving in Rome is hectic, with its confusing web of one-way streets. But driving between the two cities allows for stopovers in the smaller hill towns of Tuscany and Umbria, many of which are famous winemaking centers.

Once you’re outside of Florence, the drive down the A1 autostrada, a toll road,  is straightforward and the road is modern and well-maintained. When you reach the outskirts of Rome, you’ll connect to the Grande Raccordo Anulare, abbreviated GRA, which is the ring road encircling central Rome. Be sure to consult a map or GPS well in advance of hitting the GRA, so you know which exit to take.

If your budget allows, hiring a private driver is a more comfortable option for getting between the two cities, and kimkim offers many itineraries that include stops of a few hours or a few nights along the way.

Alitalia offers several flights a day from Florence to Rome. A tram from Santa Maria Novella station departs every 5 minutes for the 25-minute journey to Florence’s Peretola Airport, abbreviated FLR and often referred to as Aeroporto Amerigo Vespucci. The 50-minute flight arrives at Rome’s Fiumicino airport, then it’s a 30-minute train ride from the airport to Termini station.