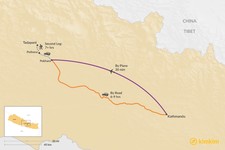 Tadapani is a small village in the Annapurna Himalaya that is a common overnight stop on the Ghorepani Poon Hill Trek, as well as the Muldai & Poon Hill Trek. It's quite easily accessible from Pokhara, although it does require trekking there, as it's not connected by road. Pokhara itself can be reached from Kathmandu by air or overland.

Flying is by far the quickest and most comfortable way of traveling between Kathmandu and Pokhara and highly recommended if you're short on time or value an easy trip. Numerous flights leave each day from the domestic terminal of Tribhuvan Airport, which is right beside the international terminal.

Flights only take around 30 minutes, although they are frequently delayed due to weather in Kathmandu, Pokhara, or en route. It's a very scenic flight on a clear day--try to sit on the right-hand side of the plane between Kathmandu and Pokhara so you can see the Himalaya above the clouds.

Flights run daily, with the last flight leaving around 3:30 pm. It's advisable to be booked onto the earliest flight of the day because if there are delays, re-bookings are done in the order of the original flight. If you're booked onto an afternoon flight and there are several hours' delay, you may not even get on another flight that day.

In Pokhara, the small Pokhara Airport is just a couple of miles from Lakeside, and there are always taxis waiting to take travelers to their hotels. (Check out these articles for the best resorts and hotels to stay at in Pokhara.)

The Prithvi Highway connects Kathmandu and Pokhara, and it's an undeniably scenic journey, following the Trisuli River for the first half, and with the high Himalaya coming closer into view as you get nearer to Pokhara. However, because of road and traffic conditions, it can be a slow journey. On a good day, a bus journey can take as few as six hours, but it frequently takes as long as eight or nine.

Hiring a private driver is the most comfortable and convenient option. Foreigners are not allowed to hire cars for self-driving in Nepal, and most wouldn't want to anyway. Hiring a car and driver is the most expensive option, but you can stop where you like to take photos or have a comfort stop, plus you can leave at any time of day (the buses tend to leave early in the morning).

Tourist buses offer the best cost-to-comfort ratio. They're more expensive than local buses but much safer and usually air-conditioned. Most tourist buses leave from near Thamel at 7 am and arrive at Pokhara's tourist bus park, not far from Lakeside. Pre-book tickets during busy times, or if you're traveling in a large group. Many companies offer a very similar service. The more luxurious Greenline Bus is the most comfortable and leaves Thamel at 7.30 am. Tickets are more expensive but include a buffet lunch, and comfort stops are of a higher caliber.

Local buses in Nepal, are the cheapest option but the least comfortable, or safe. You can catch a full-size bus or a smaller microbus--either way it'll be jam-packed. They leave throughout the day, roughly every half an hour, and mainly from the Gongabu Bus Park. In Pokhara, they arrive at the Prithvi Chowk Bus Park or other local bus parks. Don't be surprised to share the bus with animals or birds, for the seats to be broken, for the music to be uncomfortably loud, and for the comfort stops to be infrequent. You may even need to stand.

Some trekking itineraries take their time getting to Tadapani from Pokhara, arriving there after two or three days of walking. For the purposes of this article, we're assuming that you're seeking the most direct route to Tadapani.

If you travel between Kathmandu and Pokhara on an early-morning flight and everything runs on time, there is time to continue your journey from Pokhara to Tadapani on day one. If you travel overland from Kathmandu to Pokhara or take a flight later in the day, you'll need to spend a night in Pokhara. This is a good idea anyway, if time allows, as there is lots to see and do in the lake-side city.

By Private Transfer & on Foot

From Pokhara, head west along the winding hill roads. Along the way, you'll see many places that are the trail-heads for various treks. Continue until you reach Kimche, about 2.5 hours from Pokhara.

Trek towards Ghandruk, a famous little town in the region that has attractive traditional architecture and strong Gurung culture. From Ghandruk you should be able to enjoy views of Machchapuchhare and Hiunchuli.

Continue along a trail that passes through rhododendron forests (which bloom in the spring), to Bhaisi Kharka. From here, the last leg of the day's hike is short and steep, up to Tadapani.