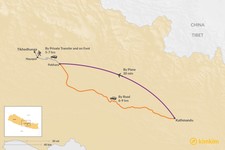 Tikhedhunga is a small mountain village north-west of Pokhara, and is a common place for trekkers in the Annapurna region to stop overnight. It's often the first overnight stop on the Ghorepani Poon Hill Trek. It's easily accessible from Pokhara through a combination of vehicle travel and trekking, and Pokhara itself can be reached from Kathmandu by air or overland. Here's what to expect from the journey between Kathmandu and Tikhedhunga.

Flying is the easiest and most comfortable way of getting to Pokhara from Kathmandu as it's quickest, easiest, and most comfortable. Flights leave from Tribhuvan Airport's domestic terminal throughout the day. The last flight leaves mid-afternoon, but it's best to try to get on the earliest flight of the day: if there are delays, re-bookings are done in the order of the original flight. If you're booked onto an afternoon flight and all morning flights are delayed, the knock-on effect means you may not end up flying until the next day.

Flights only take around 30 minutes, although they are frequently delayed because of the weather. Try to sit on the right-hand side of the plane for the best mountain views.

In Pokhara, the small Pokhara Airport is just a couple of miles from Lakeside. It's easy to get a taxi into town, or arrange for a hotel pickup—here are some recommended places to spend the night.

Hiring a private driver is the most comfortable and convenient way of traveling overland between Kathmandu and Pokhara. It means you can stop when and where you like, plus you can leave at any time of day.

Taking the bus is the scenic option, and worthwhile if you're on a tight budget and not short on time. You'll follow the Prithvi Highway, which connects Kathmandu and Pokhara. It runs almost parallel to the Trisuli River for the first half of the journey, and the mighty Himalaya come closer into view on the second half. However, because of road and traffic conditions, it can be slow and physically tiring. When there are no road delays, the overland journey can take as few as six hours, but this is uncommon. It can often take as many as nine.

Tourist buses are cheaper and reasonably comfortable: they're more expensive than local buses, but much safer. They stop every couple of hours at roadside service stations, where there are toilets and food available. Most tourist buses leave from near Thamel around 7 am, and arrive at Pokhara's tourist bus park, not far from Lakeside. Pre-book tickets during busy times, or if you're traveling in a large group. The more luxurious Greenline Bus is the most comfortable—tickets include a buffet lunch, and comfort stops are of a higher caliber.

Local buses are cheap but generally uncomfortable and not very safe—overcrowding and speeding should be expected. They're only really an option if you're on a very tight budget, or need the flexibility of leaving Kathmandu later in the day.

If you fly from Kathmandu to Pokhara early in the morning and everything runs on time, and you have a private pick-up arranged from Pokhara Airport, it's possible to get from Kathmandu to Tikhedhunga in one day. You'd arrive at your destination in the evening. However, unless you're in a real hurry, a more leisurely itinerary that includes at least one night in Pokhara is a better option. There's plenty to see, do, and eat in Pokhara.

While it is possible to take a local bus or shared vehicle to Nayapul, these forms of transport are much slower and less comfortable than a private car. Plus, local buses can be crowded and unsafe. Most trekkers are keen to start walking as soon as possible, rather than spend hours on uncomfortable public transport.

Say goodbye to your vehicle at Nayapul. If the weather is clear you should have good views of distinctive Macchapucchare (Fishtail) from here. The trek to Tikhedhunga takes 4-5 hours along a non-vehicle trail, passing through cultivated farmland and over the odd suspension bridge along the way. Tikhedhunga is located just before one of the more challenging parts of the Ghorepani Poon Hill Trek, the more than 3,000 steps up to Ulleri, so most trekkers like to have a good rest at Tikhedhunga on day one.

Vladimir L.
California, United States
"To say this was a perfect experience is an understatement! Sangita and her husband, Bipin, provided my girlfriend and I with the dream excursion around Kathm..." read more
Traveled to Nepal as a couple in December, 2019
Plan your trip to Nepal
Customize your trip with help from a local travel specialist
Plan Your Trip