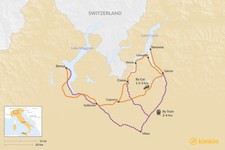 If you're hopping around the Italian Lakes region, there are a few ways to make the journey between Lake Como and Stresa, on the western shore of Lake Maggiore. Lecco is a common starting point on the eastern side of Lake Como, making this a 75-mile (120 km) trip.

Driving is the fastest way to reach Stresa. From Lecco, you can get there in two hours without stops, though there's a more scenic, lakeside route that takes about three hours.

Taking the train is also a relatively straightforward, with multiple departures each day from the city of Como to Stresa with a connection in Milan.

If you're on the eastern side of Lake Como, say at Varenna or Lecco, and want to get to Stresa as quickly as possible, start by heading south on the SP36, which is a divided 4-lane motorway for most of the drive. Stay on the SP36 as it leaves the lakeshore, then head west on the SP32 at Peregallo. At Copreno, you'll merge onto the A36 (Autostrada Pedemontana Lombarda), a toll road. Just before Gallarate, you'll pick up the E62 (also labeled A8/A26 dir in sections) and take this all the way up to Stresa. Don't be concerned about the multiple names for the same road – if you see signs indicating Lago Maggiore, you're going the right way.

If you've got the time and want to take a much more scenic drive from Lecco, pick up the SP583, a two-lane road that passes directly along the lakeshore for most of the drive, passing through Limonta, Bellaggio, Nesso, and dozens of small towns built into the steep shoreline before reaching the city of Como. From Como, you can follow signs for the A9 (Autostrada dei Laghi) south to meet the A36, then the E62 at Gallarate and proceed per the above directions. This trip will take about 3 hours, depending on traffic.

It's possible to continue on an even slower (and even more scenic) route through Varese and along Lago di Varese to the eastern shore of Lago Maggiore. This is a much more complicated route and takes about 4 hours (more if traffic is heavy in Varese).

If a car tour of Northern Italy appeals to you, take a look at this 15-day itinerary for Milan and the Lakes Region, which includes the Dolomites and Verona.

Train travel from the eastern shore of Lake Como or from the city of Como to Stresa is relatively simple. Direct, regional TreNord trains leave most of the lakefront cities for Milano Centrale (Milan Central) station. From there, Trenitalia EuroCity or Regionale trains travel to Stresa. There are departures all day long, but be sure you choose an itinerary that only requires you to change trains one time, at Milano Centrale. Travel time depends on how long you have to wait for your connecting train in Milan.

If spending eight days soaking in the sunshine and views of Italy's...

From high in the Dolomites to the shores of Lake Como, romance is in the...

The city of Alba is best known for its white truffles, sometimes...

Michael G.
California, United States
"Absolutely perfect trip top to bottom. White glove service all along. Alessandro was fantastic at both his plan for us and his willingness to work with us as..." read more
Traveled to Italy as a family in July, 2022

Jennifer N.
Canada
"Everyone was incredibly friendly, punctual and helpful! It made for a very smooth and seamless trip experience! Would definitely recommend " read more
Traveled to Italy as a family in July, 2022
G
George T.
South Carolina, United States
" We had a wonderful time on our Italian vacation and we would like to thank Andrea for all his help to organize this trip. It gave us comfort knowing that if..." read more
Traveled to Italy as a couple in July, 2022

Colleen Y.
California, United States
"We used kimkim to help us plan our honeymoon to Italy (Rome, Venice, Amalfi Coast). The entire process from start to finish was so easy for us - all thanks t..." read more
Traveled to Italy as a couple in June, 2022
Plan your trip to Italy
Customize your trip with help from a local travel specialist
Plan Your Trip