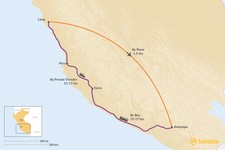 To get from Lima to Arequipa, the best option is to take a plane. The second option, also popular, is to take a private transfer or bus via road. Arequipa is connected by train to Cusco, so technically a third option would be to fly to Cusco and to take the train from there, but this is very rarely done as an A to B journey.

Traveling by plane from Lima to Arequipa is by far the most efficient way to go, and prices can be quite reasonable. It is, however, still generally the most expensive means of arrival (although some bus companies charge as much for their luxury seats).

By far the best road from Lima to Arequipa is Highway 1, which runs all the way. This is an arid trip along the coast and through the Peruvian desert. The best place to break the journey if you so choose is Nazca, eight hours from Lima and nine to ten hours from Arequipa.

Those interested in going by bus should use Cruz del Sur, established as Peru's most dependable long-distance bus company. Cruz del Sur offers one daily direct morning departure and multiple afternoon departures from their Javier Prado terminal in Lima. A fully reclining VIP seat on one of these buses is more comfortable than a lot of planes and can be as expensive. Another good company for this route is Civa, with a similar number of direct daily departure from the Javier Prado, La Victoria, and Atocongo terminals in Lima.

I
Isaiah N.
Washington, United States
"We had an incredible experience working with Kristy from the very beginning. Kristy answered all of our questions and was always very attentive when we were..." read more
Traveled to Peru as a couple in December, 2021