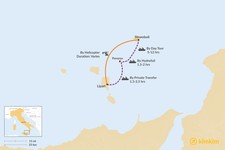 Travel from one island to the next is one of the most exciting aspects of the Aeolian Islands due to the many panoramas you'll fit into a single day trip. At just 28 miles (45 km) between the two, Lipari and Stromboli are no exception.

The most affordable way to get from Lipari to Stromboli is by hydrofoil (1.5-2 hours). Similar to a ferry, the hydrofoil is a common mode of transportation across Italian islands. Private transfer is a convenient alternative (1.5-2.5) that allows you to set your own schedule.

A convenient option is an organized tour group where the entire day is planned with activities, including transportation (5 hours or more). While preparing for your trip make sure to check this Sicily Highlights Self-Drive Tour Itinerary with the Aeolian Islands.

Hydrofoil is the most common way to get from Lipari to Stromboli, a mode of transportation popular along the Aeolian Islands for its speed and convenience. The operator Liberty Lines runs this route. During peak summer season, it is best to purchase tickets online in advance as space does run out. You can also purchase tickets at the office at the port but keep note of the schedule as hydrofoils to Stromboli are not frequent.

Try to arrive at least 30 minutes before departure to ensure a seat with a panoramic view on the deck. If you plan on heading back to Lipari by the end of the day, note that the last hydrofoil back is around sunset.

This is the most convenient way to get from Lipari to Stromboli. It also allows you to make a stop in the island of Panarea at your own pace. You’re also welcome to hop off as soon as you spot an exciting swimming spot, something you would not be able to do on a hydrofoil.

Duration: Varies depending on budget and selected route

Though the most expensive way to get from Lipari to Stromboli, helicopter travel is a popular mode of transport across the Aeolian Islands and various companies offer the service. Though most people book helicopters when departing from Sicily’s mainland (from cities such as Palermo and Taormina, and in some cases Rome), the trip can also be organized from one island to the next. The helicopter ride offers a bird's-eye view of Stromboli’s volcano craters, a sight that arguably warrants the steep helicopter cost.

During the summer season, there are various tour groups leaving from Lipari and heading to Stromboli. These groups generally depart on a private boat from Lipari's Marina Corta. Some activities included in these excursions are night trekking on Stromboli's craters and a guided tour of Strombolicchio. Certain tour groups may include a lunch stop on the island of Panarea with a dip in the stony Cala Junco Beach.

All tour groups return by the end of the day. If you intend on spending the night in Stromboli, you may choose to organize your return independently.

Ask your local specialist to organize your tour from Lipari to Stromboli.

Experience the highlights of Sicily on this in-depth tour. Beginning and...

Discover the highlights of Sicily with this 10-day loop of the island,...

This 12-day grand tour of Sicily is a perfect mix of culture and...

Explore Sicily's highlights, including four days on three of the Aeolian...

Enjoy this 11-day itinerary from Catania to explore the Aeolian Islands...

Perfectly blending culture and history with adventure, this 13-day tour...