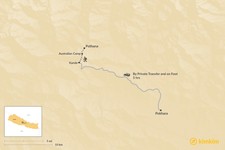 Pothana is an early stop on some treks in the Annapurna Himalaya, such as the Ghandruk Trek and the Mardi Himal Trek. It's not far from Pokhara and can be reached through a combination of overland travel and trekking.

If you're starting in Kathmandu, your route to Pothana will be similar—see this article for more.

From Pokhara, take a private vehicle west along the Pokhara-Baglung Rajmarg Road. This is a well-developed road as many travelers heading into the Annapurnas travel this route. Side-roads, however, are generally just tracks. You'll continue along this road for about an hour until you reach the turn-off to Dhampus, at Kande. From there, you'll continue by foot, hiking through Dhampus and the Australian Camp until you reach the small village of Pothana, which should take around four hours. The trail is peaceful and passes through rhododendron forests, with snow-capped mountains coming into view when the weather is clear.

This Nepalese adventure includes a 4-day trek on one of the best-loved...

This trip combines the main cultural and natural highlights of Nepal's...

Combine two classic Nepal experiences: the Ghandruk trek in the...

Sophie S.
Switzerland
"We really like the trekking ! It was as we expected, the organisation was perfect and Sangita is very available and kind. She answers fast and precise and sh..." read more
Traveled to Nepal as a couple in November, 2021

Dale H.
New Zealand
"Had a wonderful time and memorable experiences on the Annapurna circuit. Fantastic scenery and breathtaking mountains. Tashi organised everything perfectly..." read more
Traveled to Nepal solo in January, 2020
N
Natalie S.
United Kingdom
"Firstly planning our trip with Kim Kim was a delight. The team really asked the right questions and understood what we were looking for in an itinerary. Aman..." read more
Traveled to Nepal as a couple in January, 2020
Plan your trip to Nepal
Customize your trip with help from a local travel specialist
Plan Your Trip