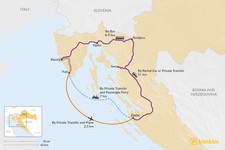 It's a 205-mile (330 km) trip by road from Rovinj to Zadar. The quickest way to make this journey is by private transfer to Pula and then a flight to Zadar. Another option is to drive, using a private transfer service or rental car. In this case, the trip would take approximately 5 hours.

There's also the option to take a private transfer to Pula from where there are passenger ferries departing to Zadar. Though the sea route is a scenic way to make the trip, it does take much longer. Bus travel between Rovinj and Zadar is not convenient because there's only one direct bus connection.

This 10-day tour takes in the sights or both Rovinj and Zadar as well as the capital city of Zagreb, the castles of the Zagorje region, the hilltop towns of Istria, and two national parks: Brijuni and Plitvice Lakes.

By Private Transfer and Plane

The quickest way to travel from Rovinj to Zadar is to take a private transfer to Pula airport, a 45-minute drive. From here there are daily direct flight connections to Zadar operated by Croatia Airlines. The flight time is 35 minutes.

Another longer but more scenic route is to take the Jadranska Magistrala coastal road that snakes down the Adriatic coast. Consider making a stop in the scenic town of Senj on the way.

If you prefer not to navigate European roads and leave the driving to a local, using a private transfer service is the best option. This is also the most convenient way to get from Rovinj to Zadar as it allows for a flexible schedule and door-to-door service. Contact your local travel expert for more details on private transfer services.

By Private Transfer and Passenger Ferry

The trip from Rovinj to Zadar can also be made via a sea connection. Take a private transfer to Pula, a 45-minute drive. From here, there are regular passenger ferries to Zadar which stop at several islands on the way.

During the high season (July and August), there's a 7 am departure running four days a week. This reduces to two departures a week during the shoulder season (June and September), and one weekly departure (Fridays) during the rest of the year. The crossing from Pula to Zadar takes 6 hours and 15 minutes.

Traveling by bus from Rovinj to Zadar is the most budget-friendly travel option but is time-consuming and not the most convenient. There's only one direct bus connection that arrives in Zadar in the middle of the night. The other option is to take one of the many buses heading to Rijeka and from there, connect to a direct bus service to Zadar.

Experience the best of Slovenia and Croatia on this 11-day road trip....

This epic Central Europe itinerary highlights the top cities and...

A
Anant V.
Texas, United States
"Antonia planned an absolutely wonderful trip to Croatia for us. We went to Dubrovnik, Korcula, and Split. At each place she planned activities for us while l..." read more
Traveled to Croatia as a family in July, 2022

Erika F.
California, United States
"I'll start by saying that I have never used a tour guide or a tour company prior to working with Robi through KimKim. But, once I started sharing the type o..." read more
Traveled to Croatia as a family in June, 2022
D
David K.
Massachusetts, United States
"We had a terrific experience in Croatia! Antonia was a fabulous planner and had great expertise to share. She was patient, thoughtful, creative and put toget..." read more
Traveled to Croatia as a group in July, 2022

Jennifer C.
Florida, United States
"We had a 5 day excursion with Robi and it exceeded our expectations! Robi showed us some of the best parts of his beautiful country! The biking routes he sel..." read more
Traveled to Croatia as a couple in July, 2022
S
Sarah M.
Colorado, United States
"Our family of four had a wonderful trip to Croatia thanks to the thorough and excellent planning and support of Nikola. From our first correspondence through..." read more
Traveled to Croatia as a family in July, 2022

Tamatha R.
Minnesota, United States
"My partner, D'Wayne and I agree this was the most memorable trip we have experienced! Sarah was phenomenal throughout the entire process, from planning, p..." read more
Traveled to Croatia as a couple in June, 2022
C
Caroline D.
Minnesota, United States
"Robi was very helpful in planning our family trip to Croatia. He gave sound advice about where to stay along the coast, and arranged two experiences for us: ..." read more
Traveled to Croatia solo in June, 2022
Plan your trip to Croatia
Customize your trip with help from a local travel specialist
Plan Your Trip