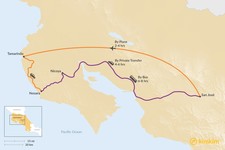 The trip from San José to Nosara is a popular pilgrimage made each year by beach-lovers, adventurers, and surfers alike. It's approximately161 miles (259 km) to this coastal town on the Nicoya Peninsula and there are a few different ways to cover that distance. The best way is by hopping on a flight into Tamarindo or Tambor first and taking a private transfer the remainder of the way.

If you drive the whole way, you'll get a great glimpse into everyday Costa Rican life in the countryside. The roads are a mix of well-maintained highways and windy gravel back roads. In the green season, rain and flooding can cause delays, especially in the more remote areas.

Public transport by bus is another option but your ride could take a good part of the day and your schedule will be limited. Think about reserving a shared shuttle for the ease and convenience of being picked up at your desired location.

Nosara lies fairly equidistant between the two airports. The flights from San José are quick, both under an hour, but you'll have to catch a taxi, private transfer, or bus to get you the rest of the way. From Tambor, at the southern end, it's a three-hour drive.

From Tamarindo, in the north, it's only about an hour and a half. On this part of the coast, however, most roads are unpaved or low-lying which can mean delays in rainy weather. Depending on the time of year, traveling by 4x4 vehicle is highly recommended.

It is possible to drive the entire distance from San José to the peninsula. It's the next best option and gives you the ability to add other destinations to your visit. Out of the city, you'll catch Route 1 until it meets Route 18. That highway will link up with Routes 150 and 160 and take you into Nosara.

There are a few toll areas on the main roads but otherwise, the drive is laid-back with little traffic. If time is no issue, detour near El Roble to catch the ferry in Punta Arenas over to the peninsula. It's a nice way to break up the driving and take in the Gulf of Nicoya.

The least expensive but slowest option is traveling by bus. There is a direct public bus that leaves daily in the early morning. You could also catch a bus to Nicoya and transfer from there. Tourist shuttle buses cost a little more but they may be a more comfortable option for the long drive. Some have wifi and air-conditioning and are less crowded due to reserved seating.

This self-guided road trip is ideal for those who love adventure. Visit...

This road trip itinerary is a truly off-the-beaten-path nature...

Nina M.
Washington, United States
"Our trip to Costa Rica was one of the best trips I've ever been on, and it's all thanks to the wonderful people at GWA. This is the first time we've let a to..." read more
Traveled to Costa Rica as a couple in December, 2021