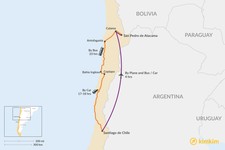 The distance between Santiago and San Pedro de Atacama is 1000 miles (1629 kilometers) and the fastest way to travel is by plane, which takes about two hours. From Santiago Airport, you'll take a flight to Calama Airport and after that, a shuttle bus will take you to San Pedro de Atacama. You can also rent a car at the Calama Airport if you plan on using one while you're here, take a private transfer, or get a taxi.

To drive up from Santiago it will take you about 17-18 hours. Driving lets you make stops at places like Capiapo, Bahia Inglesa, and Antofagasta—places for resting, getting some sleep, and exploring beautiful nature. The main road you'll be using for most of your trip is Route 5 which is a well-maintained road.

Buses are popular and take about 23 hours; they're modern with air conditioning and bathrooms. For taking the bus, it's best to choose the salon-cama (lounge bed) which is more comfortable for the long ride.

By Plane and Bus / Car

If you're taking a flight from Santiago then you'll arrive at the Calama Airport, in about two hours, to later continue either with the bus, private transfer, or by car on route 23. From Calama Airport it takes about one and a half-hour to San Pedro de Atacama.

From San Pedro de Atacama, you can take route 23 and drive south for about two hours and you'll get to Salar de Talar and Piedras Roja (Red Stones)—two major attractions where you can spend a couple of hours or a whole day.

The buses from Santiago to San Pedro de Atacama are comfortable, with air conditioning, comfortable salon-camas, drinks offered onboard, and bathrooms. The whole journey takes about 23 hours with a stop in Antofagasta and a few shorter stops along the way. This is a popular way to travel between the two destinations.

You can take the bus from Terminal Alameda at the Estacion Central in Santiago. There are direct buses with the company Turbus which is the best option. Other buses run too but they don't go directly to San Pedro de Atacama. Bring snacks or food with you for the bus ride because there is no food available on the bus and there are only short stops along the way—usually with not a lot of time to buy food.

If you don't feel like being on the bus for 23 hours straight then you can split the trip up in half and take a bus to Copiapo (Caldera) instead, where you can rest and eat a decent meal on the beach. From Caldera, you can then take a bus straight to San Pedro de Atacama.

Driving a car will get you the best scenery and you'll get to see the shape of landscapes change along the way—this is an amazing experience even though it's the less common travel option. You can rent a car in the city of Santiago where you have many different options with Lys Rent A Car being one of the best.

The drive from Santiago begins on Route 5, which is a well-maintained road and easy to drive on. After that, you'll continue north for about eight hours towards Copiapo where you can stop to spend the night. Copiapo is only an hour bus ride to Bahia Inglesa which is known for its beautiful beaches so take a few hours while you're here to explore the area. When leaving Copiapo, get on the same route towards Antofagasta. Make a stop here and get some rest, walk around in the city, and enjoy the variety of food. Get on Route 25 from here towards Calama and from Calama, drive another 1-2 hours on route 23 until you reach San Pedro de Atacama.

How to Get from Santiago to Valparaiso

How to Get from Santiago to Easter Island

The distance between Puerto Natales and Ushuaia is 477 miles (769 km)....
Getting Around Chile

Immerse yourself in the colorful tiny town of San Pedro de Atacama and...

Enjoy your first romantic retreat as a newly married couple on this...

Few other places in the world can compete with the wild, jagged...

Kick off this 5-day Chilean sojourn in Santiago for a day of cultural...

B
Bakulesh S.
California, United States
"Most guides were very good. The guide on Jan. 25, 2023 for Torres del Plaine National Park spoke at length in Spanish and very little in English. So we miss..." read more
Traveled to Chile as a couple in January, 2023

Eric H.
Oregon, United States
"The core of our trip was seeing the Atacama Desert and visiting its important sites. Lorena was excellent in tailoring our plans to suit our interests and ti..." read more
Traveled to Chile as a couple in January, 2023

Malcolm S.
Canada
"The adventure was well designed and great choices were made by Lorena, I mentioned a cruise through the fjords of Patagonia and she came through with beauti..." read more
Traveled to Chile solo in January, 2023

Yana D.
Texas, United States
"We loved our trip to Chile! Every place was amazing- experiences was the best in every place! Hotel in San Pedro Atacama desert - la casa de Don Thomas was t..." read more
Traveled to Chile as a family in January, 2023

Vladyslav B.
Texas, United States
"The trip was amazing! Everything was planned so well and there was a great variety of experiences with nothing overlapping. It is hard to experience a huge c..." read more
Traveled to Chile as a family in January, 2023

Kim M.
Virginia, United States
"We ended up using Kimkim for an additional land based trip in Patagonia to compliment our Antarctica cruise, and most everything went off without a hitch. We..." read more
Traveled to Chile as a couple in January, 2023

Sarah A.
United Kingdom
"This trip was a dream trip for my mother and I – years in the imagination and the making. I decided to use the services of KimKim because I wanted a local sp..." read more
Traveled to Chile as a family in December, 2022
Create your custom-made trip to Chile
Get Started