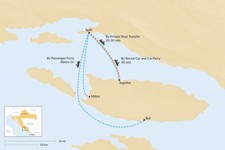 Known for its olive groves, fishing villages, and beaches, Brač Island is easily accessible from the mainland city of Split. There are only 10 nautical miles (18.5 km) separating Split from Brač, which can be reached under an hour by ferry.

There are both car and passenger ferries operated by Jadrolinija connecting Split to three destinations on Brač Island: Supetar on the north coast, Bol on the south coast (famous for its V-shaped Zlatni Rat beach), and Milna on the western tip of the island. Kapetan Luka operates passenger ferries to Bol and Milna, and Split Express offers passenger service from Split to Bol. Public transportation is limited on the island and the most flexible way to explore it is with a rental car or private transfer service.

This 7-day tour explores Croatia's Dalmatian coast, starting in Split and taking in the islands of Brač, Hvar, Korčula, as well as the Pelješac peninsula, and ending in the UNESCO-listed city of Dubrovnik.

By Rental Car and Car Ferry

There are regular ferry services operated by Jadrolinija running almost every hour from Split to Supetar. This service is the only one from Split to Brač Island for cars as well as foot passengers. It's a short 50-minute journey, and toilets, a cafe, and free wifi are available onboard.

Arrive at the ferry terminal in Split in advance as boarding starts well before departure. This is a popular route in the summer so if you're traveling according to a strict schedule, do book your ticket online in advance as the number of vehicles on board is limited. Fares are calculated according to vehicle type and number of passengers.

There are three ferry services operated by Jadrolinija linking Split to Supetar, Bol, and Milna on the western tip of the island.

The ferry crossing from Split to Supetar takes 50 minutes and transports cars as well as passengers (see above). The “catamaran” ferries take passengers only. There are two daily services from Split to Bol during the tourist season which reduces to only one ferry a day in the winter. There's only one weekly service connecting Split to Milna on Wednesdays, running throughout the year. The trip takes 30 minutes.

Kapetan Luka offers daily passenger services from Split to Milna from April to October, and from Split to Bol from the end of May to early October.

From June to mid-September, Split Express operates two daily passenger services from Split to Bol, a trip that takes just under an hour. Online reservations are available.