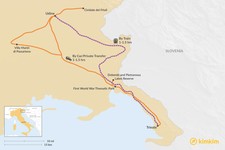 At roughly 45 miles (72 km), the ride between Udine and Trieste is short, moving southward across Italy's Friuli Venezia region and toward the Slovenian border.

As for most of Northern Italy, travel by train is the most convenient way to commute. Unlike the luxurious, high-speed train rides between major destinations such as Venice, Bologna, Rome, and Florence, the ride from Udine to Trieste is on Trenitalia's slower regionale train. The entire trip takes less than 1.5 hours.

Driving across Northern Italy is organized and straightforward for the foreign driver; however, it is important to learn about the many ZTL Zones (restricted traffic zones) prior to commuting, which are common across Italy's city centers. Moreover, Italian highways are dotted with plenty of Telepess tollways that you will need to learn to navigate. As an alternative to self-driving, private transfer (1-1.5 hours) allows you to make stops and snack detours without having to take on foreign road systems yourself.

Once you make it to Trieste, you are roughly 9 miles (14 km) away from the Slovenian border, which is a strategic point to jump into a 24-hour tour of Ljubljana.

Taking a train is the easiest way to get from Udine to Trieste. Italy's national train operator, Trenitalia, runs this route. There are no high-speed trains connecting the two cities, however, the ride between Udine and Trieste is still less than 1.5 hours on the slower regionale option. There are four stops before you get to Trieste's integral train station, Trieste Centrale, one of which is Trieste's airport, in case that is your final destination.

Note that it is not possible to book a seat in advance on Trenitalia, so be sure to arrive as early as possible—especially around rush hour, when people tend to commute between the two cities. Make sure to validate your ticket by stamping it with the date and time at one of the green machines hung on the station walls. For a panoramic view as you pass the Gulf of Trieste, opt for a seat on the right side of the train.

Once in Trieste, the train station is conveniently planted in the city center, and most sights are accessible on foot.

Driving is also a convenient way to get from Udine to Triste. A car is very useful once exiting Udine—especially if you intend on making stops along the way. The fastest way is across the A23 and E70. Take the Prosecco exit to start entering Trieste.

If you appreciate nature, plan for a stop at the Doberdò and Pietrarossa Lakes Reserve, while history buffs can explore the First World War Thematic Park. Other detours you can make along the way include Cividale del Friuli and Villa Manin di Passariano.

Keep in mind that self-driving means you will have to learn the local driving regulations, to figure out tollway payment procedures, and to understand Italy's limited driving areas. You can, instead, opt for a private transfer, which, for a 45-mile trip (72 km) is rather affordable, when compared to longer-distance destinations with private commutes.

Featuring two weeks of cycling through beautiful and diverse landscapes...

Follow the highlights of the Friuli Venezia Giulia region for more than...

Breeze through the Friuli Venezia Giulia region for six...

One of Italy's biggest attractions has always been its food, and you can...

Taste thousands of years of cultural influences on this 12-day tour...

The Friuli Venezia Giulia region may be small, but it's packed with some...

The Friuli Venezia Giulia region and its neighbors are a work of art in...

Discover the Northeast of Italy on this 14-day adventure. Explore...

The capital of Friuli Venezia Giulia moved from Udine to Trieste, and so...