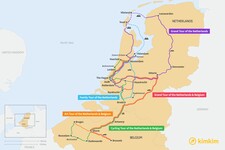 With two weeks to spend, many travelers opt for a tour of the Netherlands that includes everything from classic sights and destinations, to canals in Amsterdam and windmills in the countryside. Others choose to combine the Netherlands and Belgium on the same trip. If you're up for crossing the border, consider a 14-day trip around both countries' major highlights, or an itinerary focused on a theme like art or cycling. Read on to learn more about your options.

Itinerary #1: Grand Tour of the Netherlands

On this sweeping trip around the country, you'll view antique windmills and paintings by Vincent van Gogh, go on a boat ride on the canals of Amsterdam, relax on an island, and explore forested Hoge Veluwe National Park on an e-bike, to name just a few activities.

Welcome to the Netherlands! Start in Amsterdam with a visit to the Anne Frank House, then side-trip to see the windmills at Zaanse Schans. Explore the university city of Leiden and cycle around The Hague, the seat of government, before pedaling out to the beach. Learn about old pottery traditions in Delft, then spend a few days in Rotterdam, touring architectural highlights and visiting museums and monuments. Hop on an e-bike to discover Hoge Veluwe National Park — an art museum in the park is home to one of the largest collections of original Van Gogh paintings in the world.

In the second week, you'll get off the beaten path to sightsee in historic Deventer and see how the locals live in the hidden gem of Leeuwarden. Then you'll get off the mainland altogether and transfer to the island of Vlieland, where you'll be free to explore on a bicycle. Spend the last few days of the trip on the laid-back island of Texel, going on a hiking excursion and visiting tiny fishing villages before heading back to Amsterdam, where the trip ends. Learn more

Itinerary #2: Family Tour of the Netherlands

The Netherlands is a fabulous destination for a family vacation, as you'll quickly see on this 14-day adventure around the country's peaceful islands, coastal bike paths, urban canals, and interactive museums.

The adventure begins at the kid-friendly NEMO Science Museum in Amsterdam. You'll hang around the capital city for another day, visiting a maritime museum and the zoo before moving onto The Hague. Ride out to Scheveningen Beach on e-bikes and enjoy a relaxing afternoon by the sea. Then you'll have a chance to walk through a model version of the Netherlands at Madurodam and tour a submarine at the Maritime Museum in Rotterdam. Wrap up the first week of the trip with a detour to the famous windmills of Kinderdijk.

The next few days will be spent at Efteling, the largest theme park in the country — and one of the best in Europe! Rides, games, shows: there's something for everyone in the family, plus an overnight stay in a fairytale-themed hotel suite. On day nine, transfer to Volendam, a fishing village, to decompress. Then you'll catch a ferry to the island of Texel. Spend the rest of the trip exploring the island, riding bikes, hiking through mudflats, and sleeping in a cabin at a family-oriented campground with a swimming pool. Learn more

See castles, cathedrals, windmills, and canals, plus other key cultural highlights along the way, on this wide-ranging trip that takes you across the border from the Netherlands into Belgium.

After a day or two in the Amsterdam area, where you'll arrive and see a few major sights like the Anne Frank House, the itinerary takes you to the university city of Leiden and the architecturally eclectic port city of Rotterdam. See the windmills at Kinderdijk and cycle through Hoge Veluwe National Park, with an extra day for hiking or relaxing, before the first week in the Netherlands comes to a close and you cross the border to Belgium.

Explore the old city of Antwerp on foot, heading to the city's river beaches to relax with locals and enjoy a picnic. The following day, you'll sample Belgian waffles and other local delicacies on a food tour of the city. Then it's onto the medieval city of Ghent, known for its famous markets, a massive castle, and an impressive cathedral. You'll take it all in during a boat tour of the city. Continue onward to Brussels, where countless museums and monuments await, including the Royal Palace, the Cathedral of Sint-Michel and Sint-Goedele, and humorously enough, a tiny statue of a peeing boy (Manneken Pis). Don't forget to try a gourmet version of a local specialty: brussels sprouts! Learn more

Pedal through coastal paths and green landscapes, past windmills and tulip fields, on this active two-week bicycle trip around the Netherlands and Belgium.

Touch down in Amsterdam and do some sightseeing before cycling to the historic city of Haarlem on day two. From there, you'll ride through the scenic Bollenstreek, the "Flower Bulb Region," then continue on to Delft. Tour the Vermeer Center before pedaling onward to the historic cheese-producing town of Gouda and then to the windmills of Kinderdijk. Take a break during a free day in Dordrecht.

The second half of the cycling trip continues along to laid-back Breda, your last stop on the Dutch side before crossing the border to Belgium. Spend a day in Antwerp seeing the sights before moving onto the famed castle and cathedral of medieval Ghent. You'll learn about Flemish art history and textile traditions in Oudenaarde, then keep cycling, stopping at Bierkasteel for refreshing Belgian beers. The last day and night of the trip are free to relax in beautiful Bruges. Feast on locally produced chocolates and sit at a café on one of the city's historic squares to toast the end of the trip. Learn more

Get the tour started in Amsterdam with visits to several important museums: Stedelijk Museum, Rijksmuseum, Van Gogh Museum, and Rembrandt Huis, each displaying masterpieces by Dutch painters. Then it's off to Haarlem and Frans Hals Museum, followed by a trip to Leiden, a university city filled with cultural institutions. See Vermeer's "Girl with a Pearl Earring" in person in The Hague on your way to Rotterdam. More Van Gogh originals await in the art museum inside Hoge Veluwe National Park, which you'll be able to explore on a bicycle. Take another day to relax in the park before crossing the border to Belgium.

Take in some cultural and outdoor sights in Antwerp — a visit to a river beach and a food tour, to name a few —then keep moving to Bruges to see part of one of the world's great treasures, the famous Ghent Altarpiece, and tour the Groeninger Museum to see works by Jan van Eyck. Take time to taste chocolate and wander the beautiful side streets of the city before the trip leads to Brussels, where you'll finish the trip with sightseeing and free time to enjoy Belgian food and drink. Learn more

Looking for more inspiration for your trip to the Netherlands, but don't have two weeks to spend experiencing the culture and landscapes? Then check out these 10-day itineraries.

Grand Tour of the Netherlands - 14 Days

Pedal past windmills, tulip fields, and castles on this wonderful...

Make the Most of Your Time in the Netherlands

14 Days in the Netherlands - 5 Unique Itineraries

With two weeks to spend, many travelers opt for a tour of the...
Make the Most of Your Time in the Netherlands

There's no need to choose between Holland and Flanders (the...

Experience the best of Holland along with some of its hidden gems on...

Family Tour of the Netherlands - 10 Days

Welcome to the perfect family destination — Holland! On this 10-day...

This itinerary is all about flowers! In just five days, you will cycle...
The Netherlands Tours & Itineraries

If you like the idea of having some of Europe's finest art galleries and...

February is the final month of winter in the Netherlands, so the weather...

March is the end of winter and beginning of spring in the Netherlands,...

April is peak season for travel to the Netherlands, with mild spring...

The Netherlands in May: Travel Tips, Weather, & More

Kimkim has selected the best The Netherlands travel agents so you'll...

October is mid-autumn in the Netherlands and a shoulder season for...

With weather that alternates between autumnal and wintery, November...

After the busy summer and before the lull of winter, September is the...

Best Time of Year to Visit the Netherlands

A country that can be visited any time of year, the Netherlands is best...

Explore the History of Water in the Netherlands - 5 Days

A significant portion of the Netherlands is below sea level, so the...

Immerse yourself in the seafaring history of the Dutch Golden Age on...

Barbara H.
Virginia, United States
"We only had 4 nights in the Netherlands, but Mieke put together a great itinerary that made the most of our limited time. From the bustling pace of Amsterda..." read more
Traveled to The Netherlands as a couple in August, 2022

Sarah L.
Pennsylvania, United States
"Working with Mieke was great. She offered cool and interesting suggestions such as the Upside Down which turned out to be a really fun activity for our fami..." read more
Traveled to The Netherlands as a family in May, 2022

Anthony K.
Florida, United States
"Had a great trip that Mieke had only a short time to prepare for us due to our cruise cancelling at last minute. Very easy to work with and great communicat..." read more
Traveled to The Netherlands as a couple in April, 2022
J
John T.
Australia
"From start to finish, Mieke and Sebastian were amazing. They helped us shape our itinerary, provided the travel passes and all the local insight we needed fo..." read more
Traveled to The Netherlands as a family in April, 2022

Karen P.
Ohio, United States
"Our trip was amazing and Mieke was fabulous! We had fabulous experiences that we would not have had without her. I highly recommend allowing her to schedule ..." read more
Traveled to The Netherlands as a family in March, 2022
Create your custom-made trip to The Netherlands
Get Started