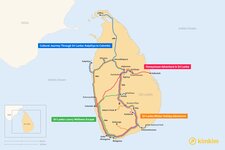 In 15 days, you can travel the length and breadth of Sri Lanka while hitting every coast along the way: north, south, east, and west. And there's a lot to see and do on this island, from exploring ancient Buddhist cave temples to lazing on golden beaches, hiking up rock fortresses, and visiting historic tea plantations in the central highlands. Whether on holiday, a honeymoon, a wellness retreat, or simply chasing the endless summer, Sri Lanka has something for everyone.

This comprehensive 15-day journey through Sri Lanka combines highlights like the Buddhist temples of the Cultural Triangle with off-the-beaten-path adventures to remote villages and exotic national parks.

You'll arrive in Sri Lanka's capital of Colombo. From here, transfer by car about 3.5 hours up the coast to Kalpitiya, a peninsula and group of islands that's an excellent base for marine excursions and trips to nearby parks and reserves. On day two, you'll visit one such protected area: Wilpattu National Park. On a safari, you'll see exotic animals like elephants, deer, and the rare Sri Lankan leopard. From there, transfer inland to Anuradhapura, a UNESCO World Heritage Site and part of Sri Lanka's Cultural Triangle of historic sites. This former city dates to the 4th century BCE and was the nation's first capital.

After visiting the ruins of Buddhist monasteries and temples in Anuradhapura, you'll transfer to the northernmost tip of Sri Lanka and Jaffna. Over a couple of days, you'll explore highlights like its Hindu temples, Buddhist shrines, and the ruins of a colonial-era Dutch Fort. Then continue south to visit the ruins of Polonnaruwa. This ancient city was the capital of Sri Lanka from the 11th-13th centuries and is another part of the Cultural Triangle. You'll visit the third part on day seven when you hike up Sigiriya, a 1,144 foot (349-m) granite column with a rock fortress perched atop it that dates to the 5th century.

On day eight, explore Minneriya National Park, home to exotic monkeys, leopards, wild storks, and the largest concentration of elephants in Asia (around 700). Continue south into the central highlands and the historic city of Kandy, the gateway to Sri Lanka's Hill Country. Tour the city's Royal Palace and famous Buddhist pilgrimage site, the Temple of the Sacred Tooth Relic. Then visit rural villages on your way to the southern coast, where you'll relax on the beaches of Unawatuna. After touring the Dutch Fort at Galle, and the streets of Colombo, you'll return home. Learn more

Escape the winter chill for a 15-day tropical getaway in Sri Lanka. During this time, you'll enjoy various highlights, from visiting the rock fortress of Sigiriya to whale watching off the coast.

Your introduction to this island is on a moto-taxi tour of Colombo. This includes stops at highlight temples like Gangaramaya and Sri Ponnambala Vanneswarar, one of the last solid stone temples in the country. Then head north to Kalpitiya to take advantage of the coastal winds and do some kitesurfing. Compliment this with a boat tour for dolphin spotting followed by a Jeep safari in Wilpattu National Park, where leopards and elephants congregate at the area's natural rainwater lagoons. Day four involves a tour of Anuradhapura's temples and dagobas (mound-shaped stupas).

You'll witness even more religious shrines and ruins on a trip to nearby Mihintale, a mountain peak and another prominent Buddhist pilgrimage site. The nature theme continues when you visit Ritigala Forest Monastery, which sits on the tallest mountain in northern Sri Lanka and dates to the 1st century BCE. On day six, you'll hike up the rock monolith of Pidurangal, which offers views of nearby Sigiriya and its ancient fortress. After a bicycle tour of nearby rural villages, you'll visit Sigiriya on day eight. Then head to Kandy, the doorstep to Hill Country.

After a city tour of Kandy, you'll visit a historic tea estate, then ascend Ambuluwawa Tower, a religious monument offering panoramic vistas. This is just the precursor to the major hike of the trip: an early morning ascent of Adam's Peak, where you'll get to see the sunrise at 7,359 feet (2,243 m). The next few days are filled with rainforest hikes and visits to waterfalls, plus you'll see the famous Nine Arches Bridge, a railway bridge that's a marvel of colonial engineering. After a whale-watching tour on the southern coast and a visit to the Dutch colonial town of Galle, you'll return home. Learn more

Plan your trip to Sri Lanka
Chat with a local specialist who can help organize your trip.
Get Started

The perfect honeymoon involves romance, beaches, pampering, and beautiful scenery, all of which you'll experience on a 15-day newlywed adventure you will never forget.

From Colombo, transfer south to Galle, a coastal city colonized by the Dutch in 1602. It has a well-preserved fort (the largest colonial fort in Asia), which you'll see on a tour. Continue to the beach town of Weligama for morning yoga sessions and excursions to nearby wetland sanctuaries. You'll also hike in virgin rainforests and stop in a rural village for a home-cooked meal prepared by a local family. Then head north to the highlands for a picnic at a waterfall, a visit to tea plantations, and a city tour of Kandy. After enjoying a bit of indulgence in Kandy, you'll visit Bambaragala Viharaya, a 2,000-year-old Buddhist temple.

On day eight, hike up nearby Pettigala Rock for panoramic views of the central highlands. On your way to the east coast, you'll stop at Polonnaruwa, the medieval capital of Sri Lanka from the 11th-13th centuries. In the coastal town of Kalkudah, you'll swim in the ocean and enjoy a romantic movie night under the stars. A return inland will take you to the Sigiriya fortress and the ancient Dambulla cave temples dating to the 2nd century BCE. After a bike ride around countryside villages, you'll return to Colombo for a city tour and then head home. Learn more

When you want to spend 15 days on a wellness retreat and luxury beach vacation, there are few better options than Sri Lanka, a country that has set the standard for high-end holidays in South Asia.

This is a unique itinerary in that part of each day is devoted to spa therapies, and some form of wellness/holistic healing, ranging from diet and detox cleanses to metabolism boosts, sleep wellness treatments, personalized yoga programs, and meditation. You'll even receive Ayurvedic treatments, the ancient holistic purification system practiced in Sri Lanka since the 3rd century BCE. It involves, among other things, herbal remedies and massage therapy.

Spend the remainder of your time enjoying the incredible sights and active adventures Sri Lanka offers. It begins in Kandy, where you'll discover its palaces and Temple of the Tooth Relic, which houses the left canine of Buddha. A real highlight is a tour of a nearby monastery, home to female Buddhist monks. Follow this with a visit to local artists' homes to share a cup of tea and view their art collection. The culture doesn't end there, as, on day six, you'll see a folkloric singing and dance performance that celebrates Kandy's rich musical heritage.

After hiking Ambuluwawa Tower, head south to Weligama and the golden southern coast, where you'll check in to your luxury villa. Start every morning with yoga in the garden or on the beach. Then spend the afternoons touring ancient Buddhist rock temples, taking a day trip to Galle to see the Fort, and visiting a sea turtle sanctuary to release hatchlings into the ocean. You'll also drive the backroads of Weligama and see exotic birds like storks, egrets, and herons. Plus, visit a hilltop pagoda built by Japanese Buddhists as a peace symbol that offers stunning coastal views. Learn more

Looking for more inspiration for your trip to Sri Lanka? Check out these other Sri Lanka itineraries, with outdoor adventures, family-friendly trips, and best-of tours to hit the highlights.

Eschew the frigid winter for the sun-kissed beaches and verdant...

This exciting tour is perfect for outdoorsy types who love history and...

Discerning travelers will love this 11-day itinerary in exotic Sri...

Marvel at the diverse scenery and wildlife of Sri Lanka during this...

With 13 days in Sri Lanka, you can soak up the country's laid-back...