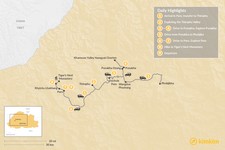 Perfect for nature-lovers, this nine-day excursion into western Bhutan will take you to both well-known and off-the-beaten-track birding zones in search of Bhutan's 770+ avian species. Fall in love with this wild country - where 72% of the land is covered in forests - and its colorful, majestic wildlife. 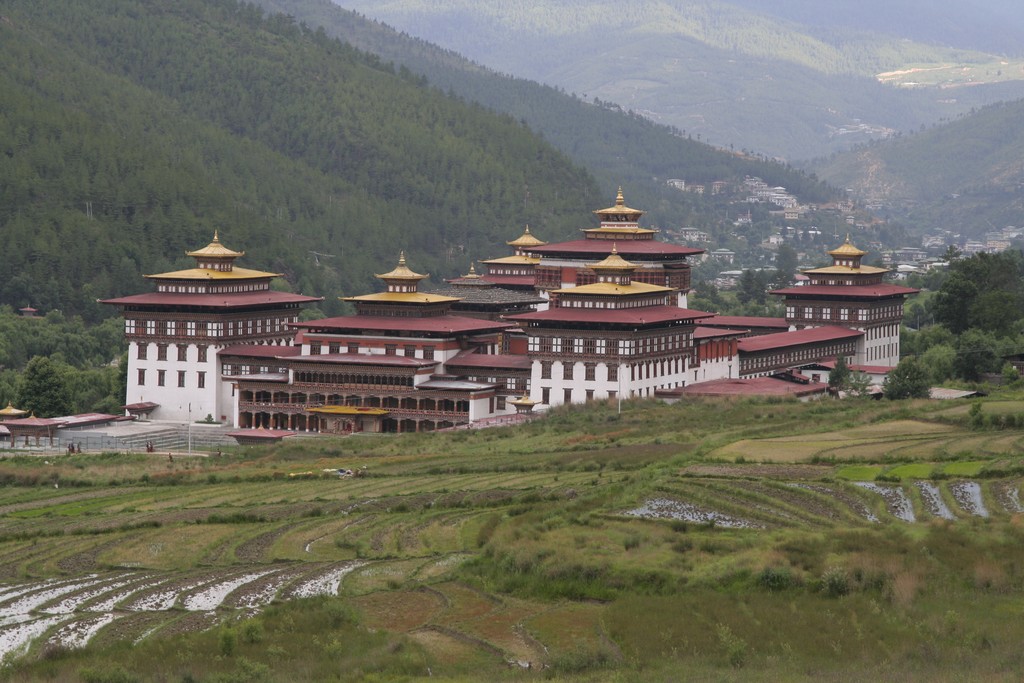 When you arrive at the airport in Paro, head straight for Bhutan's capital city: Thimphu. The best birding areas in the capital are suburbs like Upper-Motithang and the northern end of the valley (Cheri, Doedena, and Begana), so stow your bags at the hotel and make your way to the suburbs for an afternoon of birdwatching.

Start with the Upper-Motithang area - a good place to see species like the Rufous Fronted Tit. Sparrow Hawks, Rufous-Bellied Woodpeckers, Hoopoes, Nepal House Martin, and Hill Myna are also common here. In between birdwatching, visit the Tashichu Dzong and the Giant Buddha Statue before heading back to your hotel for the night. 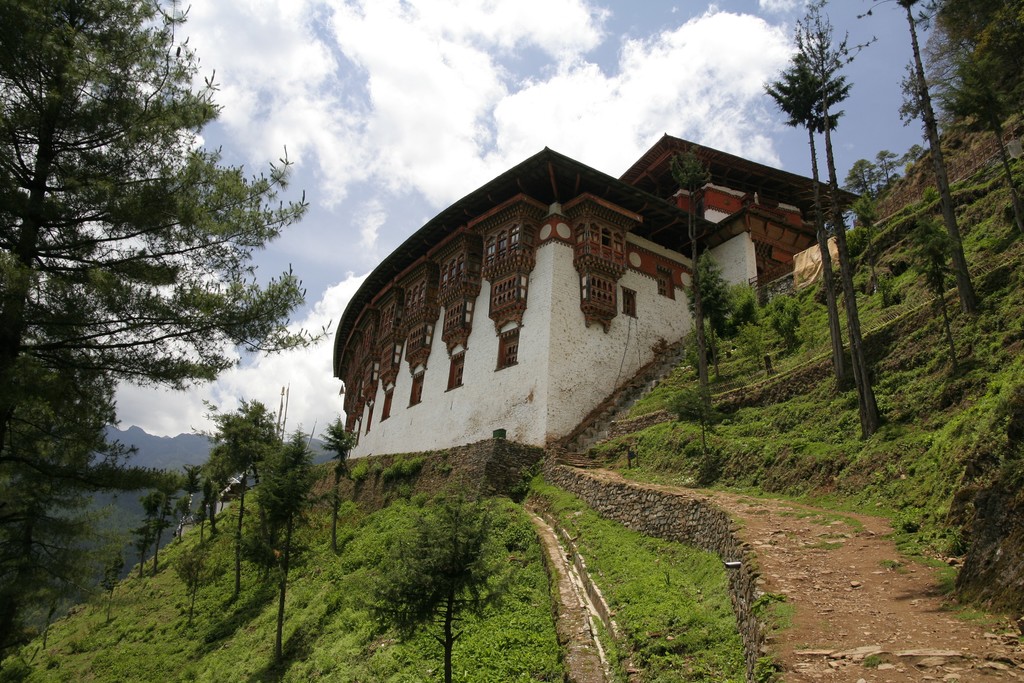 Rise early on your second day in Bhutan for a pretty drive through the rich vegetation of fir, pine, rhododendron, and apple trees just outside Thimphu. Red Billed Chough is seen frequently in this area, so keep an eye out on the way. Make your way to the northern end of the Thimphu Valley, where the Cheri, Dodema and Begana areas offer the best birding spots in the valley. Chances are high that you'll see Ibis Bills, Common Sandpipers, Crested-Pie kingfishers, Redrumped Swallows, Long-Tailed Minivets, Grey Wagtails, Yellow-Billed Blue Magpies, Spotted Nutcrackers, White-Bellied Yuhina, Red-Billed Choughs, Black-Browed Tits, Upland Pipits, and many more. After you've had your fill of feathered wonders, visit prominent sights like the Memorial Chorten, the Choki Traditional Art School, the Institute of Traditional Medicine Services, and the weekend market and archery ground.

Day 3: Make your way to Punakha 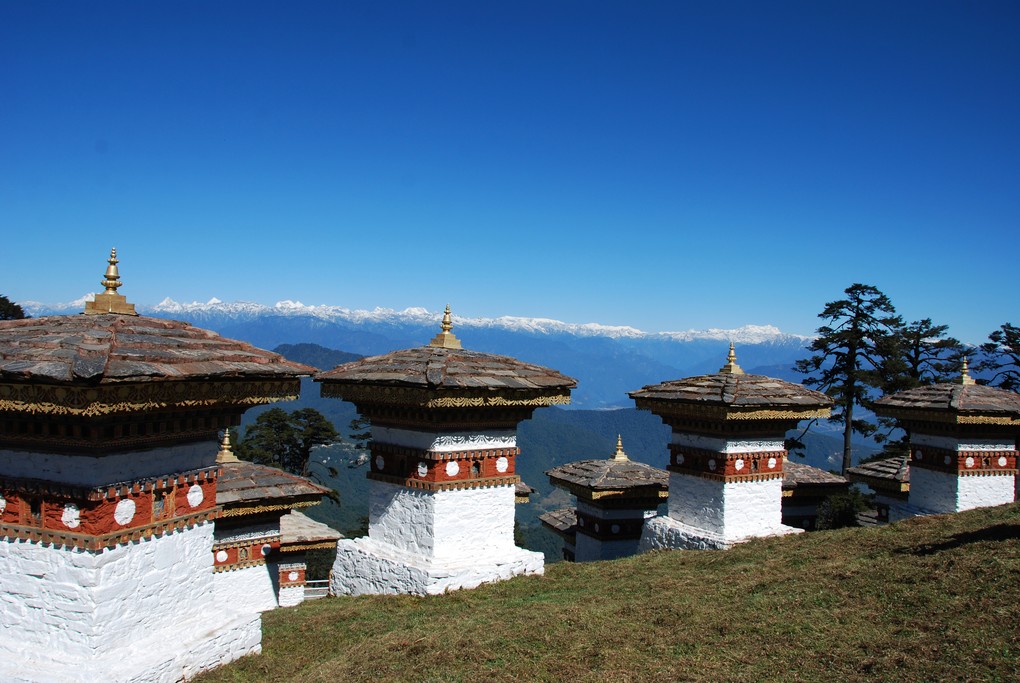 After an early breakfast, make your way east, stopping at the Dochula Pass. On a clear day, the pass offers breathtaking vistas of the entire Himalayan mountain range on the border between Bhutan and Tibet. Even better, the area around the pass is a birding haven. From the pass, lace up your boots and hike through a forest of fir, birch, and rhododendron, where various birds species thrive, making your way up to Lungchutse Monastery. The most prized sighting in this area would be Ward’s Trogon. Other birds that you may encounter include Spotted Nutcracker, Large Hawk Cuckoo, Darjeeling Woodpecker, Yellow-Billed Magpie, Chest-Tailed Minla, Collard Blackbird, Ultramarine Flycatcher, and Brown Bullfinch.

In the afternoon, descend into the bird-rich subtropical valley of Punakha. Before you get there, make a brief stop to explore the edge of forest and agricultural land in a nearby village. Sub-tropical species most likely to be seen here are the Red-headed Trogon, Wedge-Tailed Pigeon, Fire-Capped Tit, White-Gorgeted Flycatcher, the rare Yellow-Vented Warbler, Magpie Robin, Green Magpie, and Osprey.

Day 4: Birding in the Punakha Valley 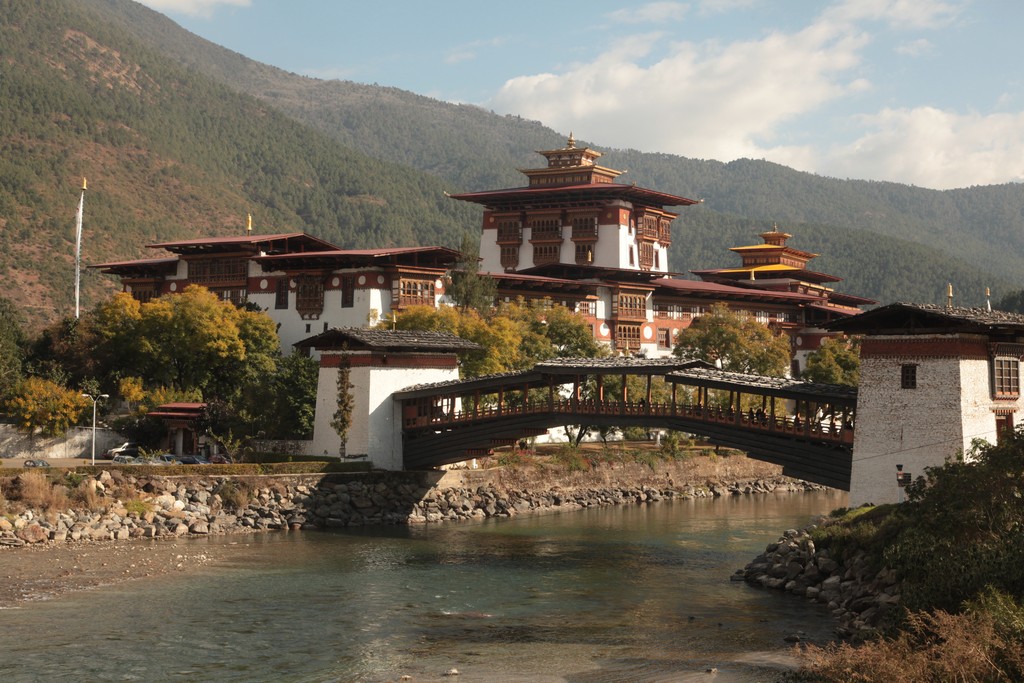 Punakha is one of the lowest places in this part of Bhutan and has a subtropical climate. In the wintertime, you'll find migrant species from alpine regions. Following an old trail along the bank of river Mo Chhu, explore its bank and surrounding vegetation. This area is renowned for the critically endangered White-Bellied Heron.

Further up the road, pause to visit the impressive Punakha Dzong, arguably the most beautiful dzong in Bhutan, and then make your way into the forests of the upper Punakha Valley where Bay Woodpeckers, Red-headed Trogons, Wedge-Tailed Pigeons, Fire-Capped Tits, White-Gorgeted Flycatchers, rare Yellow-Vented Warblers, Magpie Robins, Green Magpies, Ospreys, River Lapwings, Ruddy Shelducks, and Eurasian Wigeons dart into and out of sight along riverbanks and villages. Keep an eye out for a variety of skulkers that also call this region home, including Spotted Elachura and Pygmy Wren-Babbler and two of Bhutan’s three species of Tesia.

Day 5: Drive from Punakha to Phobjika 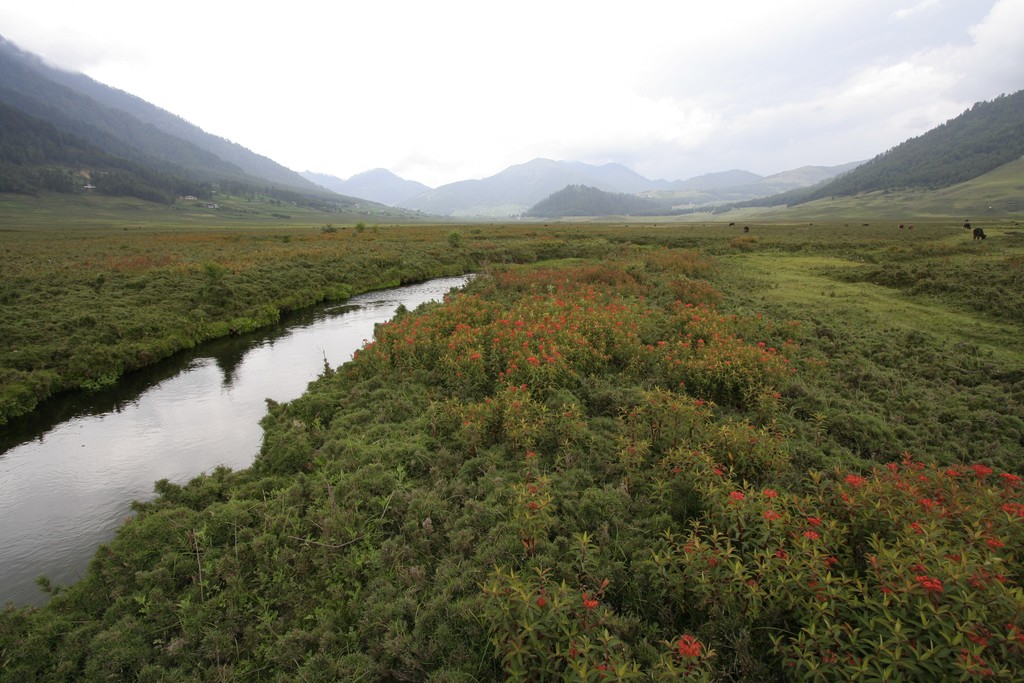 Wave farewell to Punakha, passing ruins and the construction site of Wangdi Prodang Dzong as you depart for Phobjikha. Along the way, stop often to explore the edge of a river channel (where Pallas' Fishing Eagle has been spotted) and scan the forests for Flycatchers and Wedge-Tailed Green Pigeons. This area is also home to the Carlet Finch, Black Drongo, Chestnut-Bellied Nuthatch, Slaty-Backed Forktail, Gorgeted Flycatcher, White-Throated Laughingthrush, Eurasian Jay, Wedge-Tailed Green Pigeon, Mountain Imperial Pigeon, Verditer Flycatcher, and more.

If you're traveling between October and March, the famed Black-Neck Cranes await. In the second half of the afternoon, stop at the Black-Neck Crane Center and, if time permits, take a leisurely walk in the glacial Phobjika Valley, where White-Throated Laughingtrushes, Mountain Imperial Pigeons, Slaty-Backed Forktails, Rusty-Flanked Tree Creepers, White-Browed Bush Robins, and White-Winged Grosbeaks make their home. While you're here, don't miss the century-old Gangtey Gonpa overlooking the valley.

Day 6: From Phobjika to Paro 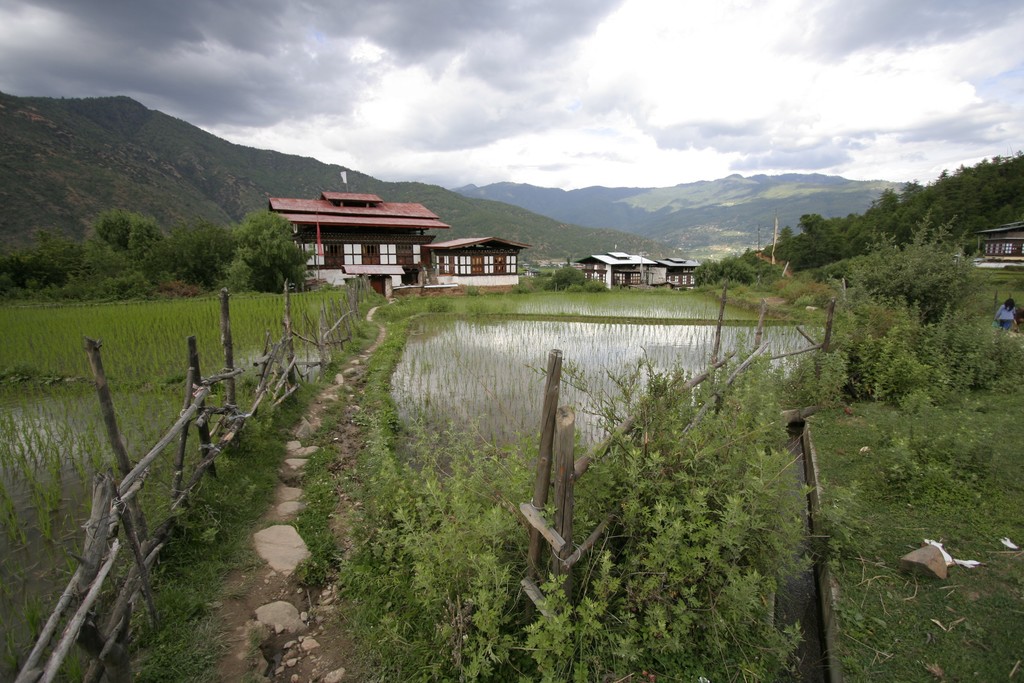 Wave goodbye to Phobjikha and its cranes as you drive east to Pele La Pass, where the morning is the best time to spot the area's most beloved birds - Satyrs Tragopan, Blood Pheasant, Khalij Pheasant, Himalayan Monal, Yellow-Billed Magpie, Chest-Tailed Minla, Collard Blackbird, and Ultramarine Flycatcher. Once you've had your fill of the area, head back to the car for a long, leisurely drive (with many birding stops along the way) to Paro. The most elusive, prized find on this drive is the Shriek Babbler. 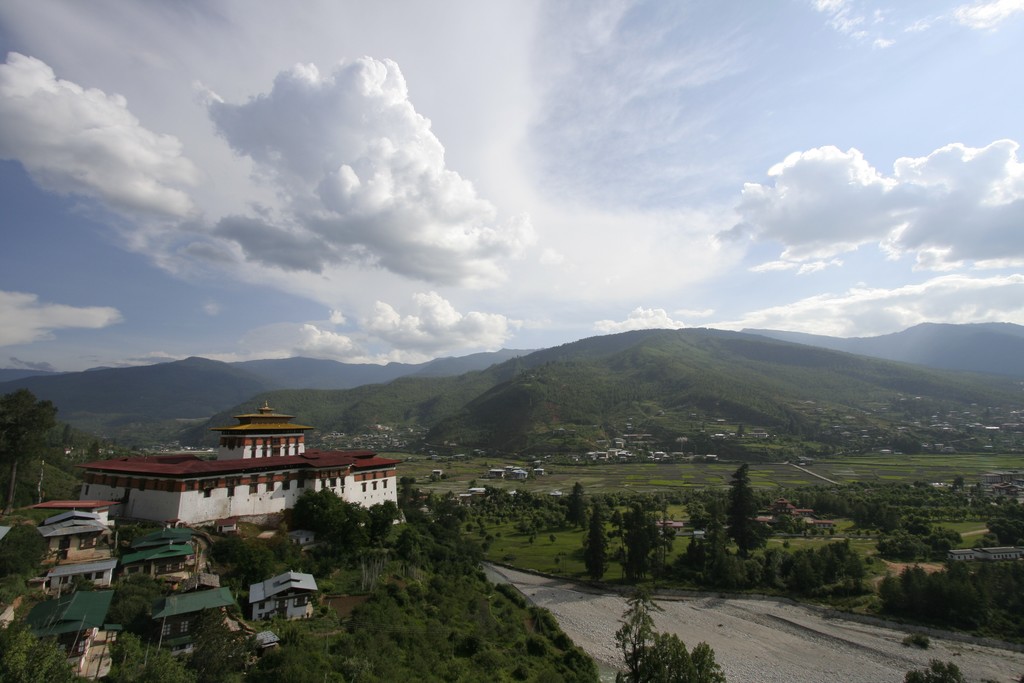 Start your first morning in Paro with a walk along the Po Chu riverbank to the Drukyul Dzong area, where varied species of birds like Fire-Capped Tits, Spotted Laughing Thrush, and Brown Dipper are likely to be spotted. Later, visit mainstay attractions like Rinpung Dzong, Ta Dzong, Dumtse Lhakhang, and Bhutan’s oldest temple, Kichu Lhakhang. 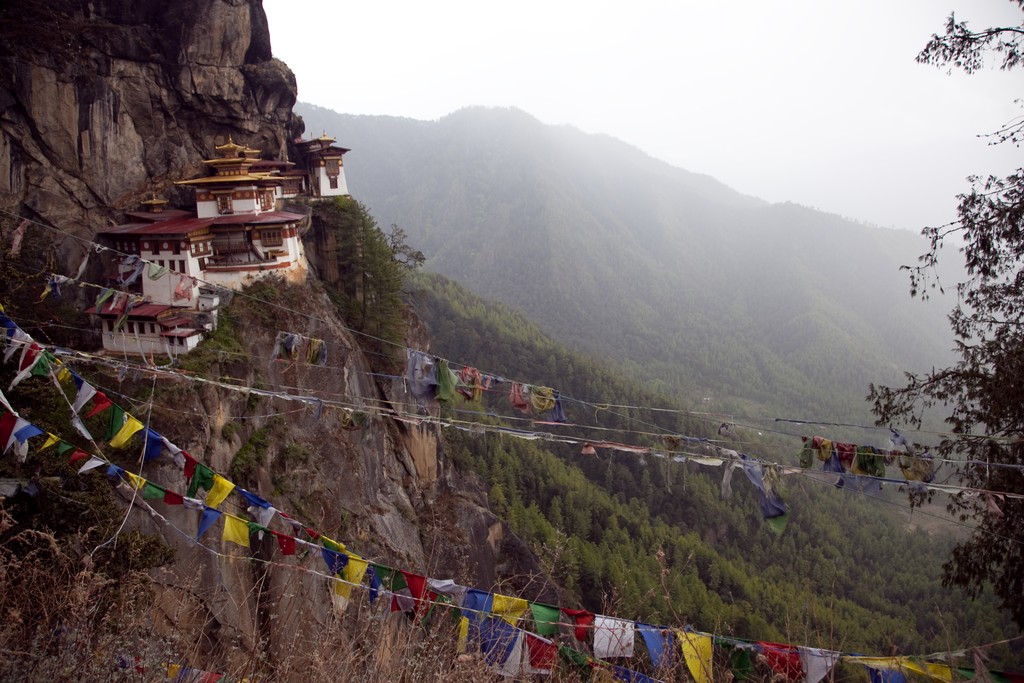 Get an early start on your hike to the iconic Taktsang Monastery for your best chance of spotting the area's most unique avian inhabitants. This is one of Bhutan's most popular hiking trails, which means the later you hike, the more crowded it becomes and the more birds steer clear. So start with the sunrise and keep your eyes peeled for Brown Dippers, Spotted Laughingthrushes, Fire-Capped Tits, etc.

In the afternoon, visit another of the Paro Valley's best birding areas: the banks of Paro River. The most common bird here is the Ibis Bill, which is found throughout the year. Other birds likely to make an appearance include Black-Faced Laughingthrushes, Brown Dippers, Spotted Laughingthrushes, and Fire-Capped Tits. In the late afternoon, head back to Paro town for your farewell dinner.

After breakfast, transfer to airport for your onward journey.