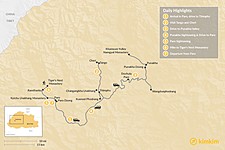 Explore the enigmatic kingdom of Bhutan and its magnificent landscape of soaring mountain peaks and lush green valleys. On this seven-day excursion, you'll visit its famous fortresses and monasteries, gain insight into the country's fascinating history and culture, and do some light hiking in the stunning countryside.

Welcome to Bhutan! You'll land in the Paro Valley, your entrance to this spectacular region. Despite the encroachment of newer development projects, Paro maintains a bucolic atmosphere with farms and charming hamlets. Your Bhutanese guide will meet you outside of customs for the one-hour trip to the capital, Thimphu, nestled in a broad valley between tall peaks and the Wangchu River. Take the rest of the day to relax, or go out and see the sights.

Begin at the Memorial Chorten, resplendent in the sunlight with its golden spires and soft sounds of religious bells. This center for tantric Buddhism contains one of the finest collections of Buddhist statues in the world. Continue to Kuensel Phodrang, home to the Buddha Dordenma — one of the largest Buddha statues in the world at 169 feet tall. In the evening, relax with a stroll up and down the main shopping street, lined with merchants selling wares of all descriptions. Rub elbows with people from all walks of life — from monks to businessmen to nomadic farmers who have come to trade supplies.

Begin your day with a visit to Changangkha Lhakhang — a 12th-century fortress-like temple situated just above Thimphu, and home to the Institute of 13 Arts and Crafts and the Bhutan School of Astrology. Later in the day, visit the craft bazaar to peruse local wares and handicrafts. Visit the post office and the attached museum, whose five galleries trace the development of the postal system from the earliest mail runners to Bhutan's highly collectible modern stamps. In the evening, head towards the 17th-century Tashichho-Dzong. Known as the "fortress of the glorious religion," this formidable building houses the throne room of the king of Bhutan.

In the afternoon, hike to the lhakhangs (monasteries) of Tango and Cheri, both an hour's drive north of Thimphu. Trek uphill for about an hour through the forest beginning where the road ends, for an elevation gain of 1,300 feet. Founded in the 12th century and rebuilt in the 15th century, Tango Lhakhang is now home to a revered trulku, a reincarnated lama whose previous incarnation is believed to have lived during the 19th century. To reach Cheri Lhakhang you'll cross a traditional wooden bridge spanning the Wangchu River. This monastery was built in 1620 by a Tibetan lama and contains a silver chorten inside that holds the ashes of his father.

Depart Thimphu in the morning and start your journey into the countryside towards the Punakha Valley, the seasonal winter capital of Bhutan. Your drive into the mountains takes you up over the Dochula Pass at 10,300 feet, which offers breathtaking panoramas of the Himalaya.

Visit the Dochula Monastery, also known as the Druk Wangyal Khangzang Chortens. This intricate cluster of 108 chortens, or Buddhist monuments, visible from every direction, is a tribute to the king of Bhutan. Then descend to Wangduephodrang, a colorful and vibrant display of fluttering prayer flags. Afterward, there are several options for excursions into the surrounding hillsides.

Choose to hike up through rice paddies to the village of Pana to see the Chimi Lhakhang temple, which was built in 1400 to protect against demons. It's revered by women as a pilgrimage destination for its fertility powers. Alternatively, visit the Punakha Dzong complex, located at the confluence of the Mochu and Phochu Rivers.

After an early breakfast, head out for a beautiful morning hike to the Khamsum Yulley Namgyal monastery, located a short 30-minute drive from the Punakha Dzong. The trail there takes you across a suspension bridge, through rice fields, and up a moderate incline through a pine forest. At the temple, participate in the ritual lighting of butter lamps before enjoying the peaceful half hour hike back down to the car. Continue driving through the countryside towards the Paro Valley for about four hours, with a stop at the Dochula Pass for a picnic lunch.

Stop to see the Royal Botanical Park, located just below Dochula, to explore the sprawling conservation area. Here you'll find 28 different species of rhododendron and over 300 other species of medicinal plants. Don't miss the orchid conservation area — the area's finest —  before heading back on the road.

Spend the day exploring this fascinating historic region. Start by visiting the Paro Dzong — one of the best examples of Bhutanese architecture. Built in the 17th century to serve as a stronghold of defense against the invading Tibetans, today the dzong is a monastic school home to 200 resident monks. Continue on to the Ta Dzong, a watchtower built in 1649, which now houses the National Museum. View the displayed collection of thangkas, tapestries which depict Bhutan's important teachers and saints, and the exhibit of impressive festival masks used for tsechu dances. See the 3D map of Bhutan in the Natural History Gallery, and stop by the Heritage Gallery with its collection of natural oddities and historical artifacts.

Head over to the 7th-century Kyichu Lhakhang Buddhist temple to learn about the local legend of a giant demoness, who lay across the whole area of Tibet and the Himalaya to prevent the spread of Buddhism. Visit the ruins of the Drugyel Dzong fortress which was built in the mid 17th century to commemorate the victory over the Tibetan-Mongol forces, and enjoy the view of Mt. Jumolhari, Bhutan's holy peak. If there is time, hike 90 minutes up to the Drakharpo Monastery, perched on the edge of a rocky cliff. Here you'll find sacred sites, including what is believed to be the body-imprint of the female Buddhist deity Vajrayogini, before heading back down to town.

In the evening, walk down Paro's main shopping street to pick up basic necessities, or simply go for a stroll and soak up the town's atmosphere.

In the morning, drive the half hour to Ramthanka to begin your hike to one of Bhutan's most sacred pilgrimage sites — the Taktshang Lhakhang, more commonly known as the Tiger's Nest Monastery. The uphill hike will reward you with spectacular views of the monastery, nestled into the side of a cliff at 3,000 feet above the valley floor. According to legend, Guru Rimpoche, the father of Bhutanese Buddhism, rode into the valley on the back of a tigress over a millennium ago and chose a cave at this location to meditate for three months.

Enjoy this peaceful two to three-hour hike to the monastery surrounded by the quiet sounds of nature and chanting monks before stopping for lunch in the monastery's cafeteria. After lunch, return the way you came. If there is time, enjoy a relaxing hot stone bath. The traditional method uses river rocks placed in hot water, where they crack and steam to release key minerals and relieve deep-set aches and pains.

Today is your last day in the kingdom. Transfer to Paro International Airport for your flight home, and tashi delek (blessings and good luck)!

Explore the enigmatic kingdom of Bhutan and its magnificent landscape of...

Longing for an adventure that's truly off the beaten track? This...

Jonathan L.
United Kingdom
"Background: I was originally supposed to do the 12 day Laya Gasa Trek, but we had to abort after 3 days (at Mt Chomolhari Base Camp), due to heavy snow on th..." read more
Traveled to Bhutan solo in April, 2019
Y
Yalmaz S.
Nevada, United States
"Trophel tours arranged an absolutely splendid 8 day experience for us in Bhutan. From the moment we were picked up, through our incredible 4 day Druk Parh tr..." read more
Traveled to Bhutan as a group in April, 2019
Plan your trip to Bhutan
Customize your trip with help from a local travel specialist
Plan Your Trip