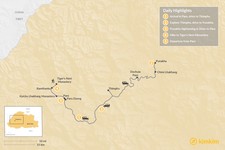 The kingdom of Bhutan remains one of the last unspoiled gems of the Himalaya. Closed to foreign visitors until the 1970s, Bhutan has an amazingly preserved traditional Buddhist culture uniquely blended with modern sensibilities. On your five-day journey, you'll visit monasteries, fortresses, and enjoy stunning views as you hike through the mountains.

Fly into the town of Paro from Delhi, Kathmandu, or Bangkok. You'll be welcomed by your guide and driven to Bhutan's capital city of Thimphu, about an hour and a half away. Spend the day exploring and visit the grand Tashicho Dzong, which overlooks the city. This fortress-like compound is a Buddhist monastery and the seat of the Bhutanese government. Then stop by the magnificent Memorial Chorten, a religious monument built to honor a former king. Finally, make your way to the giant golden Great Buddha Dordenma statue, where you'll watch the sunset over the valley below.

Today you'll delve deeper into Bhutanese culture in Thimphu. Go on a half-day tour around the city, stopping at arts workshops and museums, an indigenous medicine hospital, convents and monasteries, the weekend market, and a takin sanctuary. The takin is the national animal of Bhutan and is a large goat-like animal.

After lunch, you'll travel to the town of Punakha, about three hours away. You'll drive through thick forest as the road climbs gently up to the Dochu La Pass at an elevation of 10,000 feet (3,050m). Take in the spectacular mountain vistas to the north before continuing down to the sub-tropical Punakha Valley. Here you'll visit the impressive Punakha Dzong, an architectural masterpiece located at the intersection of two rivers. Then later in the afternoon visit the market in town and attend an evening prayer ceremony at the nunnery.

Wake up early for a short, easy hike to Chimi Lhakhang temple, dedicated to the quirky Buddhist leader Drukpa Kunley. The "fertility temple," as it's sometimes called, is filled with phallic imagery said to ward off evil spirits. From there, drive back through the Dochu La Pass for more panoramic views of Himalayan peaks along the Tibetan border.

You'll get even better views from Lungchutse Lhakhang, up on a hilltop about 1,640 feet (500m) above the Dochu La Pass. Trek for two hours through a rich growth of moss, birch, hemlock, and rhododendron trees to get to the Lungchutse temple. Enjoy a picnic lunch in fresh mountain air before walking downhill to the meditation center at Trashigang Goemba. From here, you'll be picked up and driven back to Paro for the night.

This morning you'll embark upon a full-day hike to the iconic Paro Taktsang, also called the Tiger's Nest Monastery. To reach this 17th century temple complex nestled into the mountainside, you'll climb up a somewhat steep path for one to three hours. If you're not too tired, continue further uphill to visit a few more monasteries off the beaten track. Take in the amazing views of the Paro Valley, and then stop at Bhutan's oldest temple, Khyichu Lhakhang, on the way back down. In the evening, sit down to a lovely farewell dinner with your guide.

Spend the last morning exploring Paro at leisure. Check out the National Museum inside the Ta Dzong, roam around the Rinpung Dzong, or visit the unusual Dumtse Lhakhang temple, which is home to some of Bhutan's finest murals. Then say goodbye and head to the airport for your departing flight. 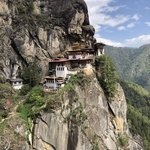 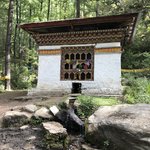 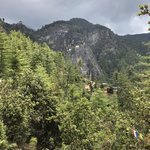 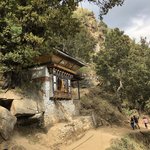 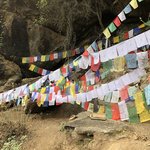 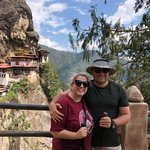