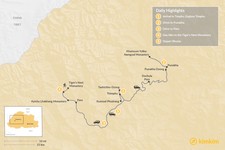 Explore mystical, naturally resplendent Bhutan - also known as Druk-Yal, the land of the thunder dragon - as it emerges from the mists of its self-imposed isolation. From museums to monasteries, this tour will guide you through some of the best of Bhutanese life, culture, nature, and history.

Welcome to Thimphu! The Bhutanese capital is situated in a large valley on the Wangchu River overshadowed by towering peaks. Arrive after lunch and make the most of your first day by visiting the Memorial Chorten, with its golden spires shining in the sun, its tinkling bells, and an endless procession of elderly people circling around it. Erected by the royal  grandmother Ashi Phutsho Chodoen in memory of her son, it houses a fine collection of Buddhist statues and is a center of tantric Buddhism in all its complexity.

Next, head to Kuensel Phodrang, where the Buddha Dordenma statue resides. It is said to be one of the largest Buddhas in the world, standing at 169 feet (51.5 meters). From here, you'll have a bird's eye view of Thimphu. Then make your way to the Folk Heritage Museum, vast art gallery, and Royal Textile Academy, where you'll learn about Bhutan's national art: weaving. Finally, wrap up your sightseeing with a drive to Tashichho-Dzong, also known as the "fortress of the glorious religion," which houses the throne room of the king.

Bid culturally-rich Thimphu farewell and make your way to the Punakha Valley, the winter capital of Bhutan. The drive will take you over the Dochula Pass, where magnificent views of the Himalayas await. Stop here and visit the Dochula Monastery, also known as the Druk Wangyal Khangzang Chortens. The design, inspired by the queen, is a unique cluster of 108 Chortens that can be seen from all directions.

Once you reach vibrant, colorful Punakha with its friendly prayer flags flapping in the wind, make time for a stroll through the countryside of rice paddies to the village of Pana with its famous temple (which attracts many a pilgrim with its reputation for fertility powers). Or, if you prefer, skip the rice paddies and head to historic Punakha Dzong - the winter residence of the head abbot and headquarters of the district's administration - sprawled at the confluence of the Phochu (male) and Mochu (female) rivers.

Time permitting, one more stunning afternoon hike awaits here in the valley - to Khamsum Yulley Namgyal Monastery. A 30-minute drive from the Punakha Dzong will bring you to the base of the hill where this temple is built. Cross a suspension bridge, walk through rice paddies, and then climb to the temple on a moderately inclined trail surrounded by pine trees.

Start the day with a visit to Paro Dzong, also called Rinpung Dzong, literally translated as "the Fortress of a Heap of Jewels." Constructed in the early 15th century as a diminutive fort, it was presented to the religious and political authority of Shabdrung Ngawang, who developed it into a much more commanding fortress in 1646. It is still, without a doubt, one of the finest examples of Bhutanese architecture. Today, the Dzong houses a monastic school, but it's not hard to imagine the great catapults that once flung stones at invading Tibetans.

Perched above Paro Dzong is a watchtower called Ta Dzong, built in 1649 to protect the undefended dzong and renovated in 1968 to house the National Museum. Before you leave, make sure to visit the unusual round building with its displays of fearsome festival masks and its collection of local oddities. Next, make your way to Kyichu Lhakhang Monastery - one of the oldest monasteries in the country - and the Drugyel Dzong Ruins. After lunch, explore the village of Paro, visit a local farmhouse, relax, and get outfitted for a local costume for a photo opp.

After breakfast, make the short drive to Ramthanka for a hike to one of  Bhutan’s most revered pilgrimage sites: the Taktshang Lhakhang - popularly known as the Tiger’s Nest Monastery. The steep uphill trek offers spectacular views of the sacred monastery, perched precariously on a sheer rock face 3,000 feet above the valley floor. Legend has it that Guru Rimpoche, the father of Bhutan’s Mahayana Buddhism, arrived in the Paro Valley more than a millennium ago on a back of a tigress. He meditated for three months in a cave, which was then converted into this monastery. Post-hike, try a relaxing, traditional hot stone bath.

In the morning, a guide will escort you back to the airport to catch your flight home.

Generations of trekkers have been drawn by Bhutan’s mystical landscapes,...

The Druk Path Trek is one of the most popular treks in mountainous...
Bhutan 5-Day Tours & Itineraries

Make the Most of Your Time in Bhutan

With a week to spend in Bhutan, many travelers choose a highlights tour...

With ten days to spend in Bhutan, your options are plentiful. Explore...

There's no place like Bhutan. Discover the kingdom's most spectacular...

Get an inside look at the fascinating culture of Bhutan on this two-week...