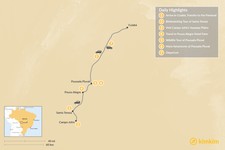 Travel to Brazil's Pantanal region for an exotic birdwatching adventure in the world's largest tropical wetland. Avid birders will spot the iconic jabiru — the symbol of the Pantanal — the blue hyacinth macaw, and the roseate spoonbill, among dozens of others. Learn the secrets of this fascinating environment through its abundant wildlife and stunning marsh landscapes.

You will be met at the airport and transferred to the Pantanal (62 miles on a paved road). Pass the city of Poconé and enter the Transpantaneira. Birdwatch all the way to the Santa Tereza Farm.

Today you will birdwatch in the amazing Santa Tereza area. At sunrise, paddle down the Pixaim River, in search of birds and other wildlife. Take a forest walk to observe smaller birds. In the afternoon, travel upstream for an encounter with giant otters. Enjoy the sunset on the river.

In the morning you will be taken on a photo safari down the Transpantaneira, a road that crosses the Pantanal with no less than 122 bridges. Enjoy birdwatching on the swampy plains of Campo Jofre. You may see a capybara (the world’s largest rodent) or a marsh deer. Depart in the early afternoon for Pouso Alegre Hotel Farm, a massive and biodiverse property. Go on a nighttime car ride with spotlights to observe nocturnal wildlife.

Today you will explore Pouso Alegre. Start with a car safari and then switch to walking. In the multiple water holes, you may see storks and aquatic birds. You may also see the discreet great potoo. In the evening, take a spotlight car ride to look for nocturnal animals and birds.

At sunrise, you will take a wildlife tour of Pouso Alegre by vehicle. In the early afternoon, travel to Pousada Piuval Farm,  a remarkable place for nature lovers. After settling into your room, take a wildlife and sunset bird watching tour by vehicle, stopping along the way to walk.

In the morning take another birdwatching tour. With some luck, you may see brown capuchin monkeys, howler monkeys, a collared anteater, or a group of South American coatis. Mid-afternoon, take a river tour on an aquatic formation called a baía, which is an enlarged part of the river that becomes a lake. You may see the least bittern hiding in the aquatic vegetation. Return for sunset on the bay. After dinner, take a spotlight car ride to see nocturnal species.

Today you will depart. But before you do, take in some last birdwatching activities. This afternoon you will be transferred to the airport.

Plan your trip to Brazil

Plan your trip to Brazil

For those who enjoy hiking, this 7-day trip to Chapada Diamantina is a...

Explore Brazil: From Rio de Janeiro to the Amazon - 7 Days

On this weeklong Brazilian adventure, experience a combination of both...

On this weeklong trip to Brazil, experience city life, and then connect...

Birdwatching in The Pantanal – 7 Days

Travel to Brazil's Pantanal region for an exotic birdwatching adventure...

This weeklong itinerary is perfect for travelers who are visiting Brazil...
Brazil 7-Day Tours & Itineraries

A Brazilian Adventure, from Rio to the Amazon – 9 Days

Start your adventure in Rio de Janeiro, known as the "Cidade...

To visitors, Rio de Janeiro is an exotic city where color and music...

Straddling the triple border between Brazil, Venezuela, and Guyana,...

From the Corcovado to Sugarloaf Mountain and Copacabana to Ipanema, this...

Trek one of Brazil's most beautiful routes through the lush Serra dos...
Brazil Tours & Itineraries

The weather is at its warmest in January, and it's a great time to visit...

March brings big crowds and a dynamic, joyful vibe to Brazil with...

Easter brings parades and energy to Brazil from the beginning to the...

Brazil in May: Travel Tips, Weather, and More

May in Brazil opens the doorway to the mighty Amazon and wildlife in...
Brazil Travel Advice

Kimkim has selected the best Brazil travel agents so you'll have a...

A Brazilian Adventure, from Rio to the Amazon – 9 Days

Start your adventure in Rio de Janeiro, known as the "Cidade...

To visitors, Rio de Janeiro is an exotic city where color and music...

Straddling the triple border between Brazil, Venezuela, and Guyana,...

It's Christmas, the weather is warm, and Brazil comes alive in December...

Trek one of Brazil's most beautiful routes through the lush Serra dos...

If you have just a week to spend in Brazil — and you don't want to spend...

Adventure mode: on! During this thrilling 5-day tour around Rio de...

Each season in Brazil offers distinct adventures, whether you are...

It's Christmas, the weather is warm, and Brazil comes alive in December...

G
Graeham W.
California, United States
"When we were looking to travel to Brazil, we knew we needed some help planning and organizing never having been to the country and not knowing the best thing..." read more
Traveled to Brazil solo in December, 2021
J
José D.
Portugal
"We loved our trip to Brasil, we enjoyed a different kind of Brasil, the Atlantic forests, the colonial villages, nature world patrimony at its best, away fr..." read more
Traveled to Brazil as a family in October, 2021

Vasilis K.
Greece
"Luciana was amazing, being always available to help us both before and during the trip! Our hiking guide Guilierme was excellent. Highlight of the trip the P..." read more
Traveled to Brazil as a group in December, 2019

Vasilis M.
Israel
"Luciana had a major contribution to our amazing experience in Brazil! She was truly committed to ensuring that we get the best from our trip. She acted reall..." read more
Traveled to Brazil as a group in December, 2019

Neal R.
Texas, United States
"Everyone from your agency made my trip with my 3 sons amazing! Lucinda was so accommodating by rescheduling some of our activities due to weather and a medic..." read more
Traveled to Brazil as a family in December, 2019

Arthur S.
Australia
"Luciana and her team did a great job starting with airport pickup till airport drop. I did 3 tours over 2 days with all different drivers and guides and all ..." read more
Traveled to Brazil solo in December, 2019
J
Jamie A.
Canada
"Our trip to Brazil was truly incredible! We asked kimkim to provide us with fun adventures, as well as time for relaxation and they sure did deliver! Lucia..." read more
Traveled to Brazil as a couple in September, 2019
Create your custom-made trip to Brazil
Get Started