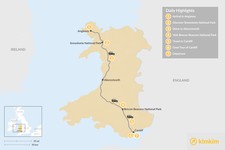 Off the north coast of Wales lies the island of Anglesey. This isle has achieved almost mythic status, steeped as it is in Celtic folklore. Legend has it that when the Ancient Romans invaded they immediately turned and fled at first sight of Anglesey's druids, whose reputation for human sacrifice and burning people alive preceded them.

Luckily the locals of today are more hospitable, with Anglesey being known more for its coastal paths, lighthouses, stately country homes, and medieval castles than any ancient pagan rituals. You'll get sweeping views of these postcard landmarks and landscapes on your flight's final approach to the airport. After touching down, we'll be waiting for you with a private transfer to your hotel, where you can spend the remainder of the day relaxing.

Designated a national park in 1951, this mountainous region in northwestern Wales encompasses an area of 823 square miles (2,130 sq km). It's also home to the highest mountain in Wales: Mt. Snowdon (3,559 feet/1,085 meters). From its summit, and if skies are exceptionally clear, you can enjoy views across the sea to Ireland and all the way up to Scotland.

The park itself is a natural wonderland of grassy hills, towering mountains, glacial landscapes, medieval castles, and glassy lakes. Due in part to its ample opportunities for hiking and outdoor activities, Snowdonia is one of the most visited attractions in all of Wales. On a day tour, you'll visit the park's highlights, traveling mostly in a vehicle with some light hiking involved.

This morning you'll head to the ancient market town of Aberystwyth, which is located on the central coast of Wales. While this charming seaside resort village is a desirable destination in its own right, for today's purposes it serves as a stopover point. That's because Aberystwyth is at the doorstep to southern Wales and your next destination: Brecon Beacons National Park, which is home to the famous mountain range of the same name. So rest up because you've got an early start the next day.

That said, in the afternoon and evening feel free to stroll Aberystwyth's pleasant waterfront promenade and enjoy a meal at one of the town's fine restaurants. There's a diverse array of dining options here: you can find everything from American-style BBQ to vegan-vegetarian dishes to Spanish tapas and, of course, typical British fare at the many pubs in town.

After breakfast, you'll embark on an excursion into Brecon Beacons National Park. This is one of just three national parks in Wales. Like the others, it conserves and protects the Welsh countryside, ensuring it will remain unspoiled for generations to come.

Established in 1957, the park covers an area of just over 500 square miles that includes the famed Brecon Beacons mountain range as well as rolling hills, caves, canals, and waterfalls. There's also an abundance of unique wildlife, including cob and Welsh mountain ponies, which are rare breeds only found in Wales. This day trip puts you right in the middle of these singularly beautiful landscapes, offering many photo ops to snap pics of the sweeping panoramas.

Next, you're off to Cardiff, which is located on the southeastern edge of Wales. This is the nation's capital as well as its largest city. Situated on a tranquil bay, Cardiff abounds with museums, stadiums, and even boasts a medieval castle in the city center. On a driving tour, you'll see these major sights, including Cardiff Castle, the National Museum (which has the largest collection of impressionist art outside Europe), and Cardiff Bay. Plus, you'll take a mini-road trip down the coast to a Victorian town on the sea.

This walking food tour of Cardiff is a treat for the taste buds. It takes you to some of the city’s best eateries as well as an indoor market, where local purveyors sell fresh produce and other items like artisanal cheeses. You'll also be able to sample a variety of Welsh beers and ciders. In total, there are eight tasting stops, and along the route, you'll get to enjoy Cardiff's famously beautiful scenery as you pass by Cardiff Castle, the local rugby stadium, and the city's parks.

One highlight of this experience involves sampling the traditional Welsh dish of cockles and laverbread. This is a local delicacy that interestingly has nothing to do with bread. Cockles are, in fact, clams, and laverbread is actually an edible seaweed. The two are typically cooked together with oatmeal and usually served alongside bacon and eggs for breakfast.

And so your Welsh adventure comes to an end. Today we'll treat you to a private transfer from your hotel to the airport for your flight home. Come back soon!

This exploration of Wales' history and legends take you deep into a...

Explore local cuisine and adventure on this 5-day journey through Wales'...

Kimkim has selected the best Wales travel agents so you'll have a...

Experience the best of North Wales' rugged highlands, beaches, and...

Explore local cuisine and adventure on this 5-day journey through Wales'...

J
Jill L.
New Zealand
"We had an amazing few weeks driving through Wales and England. Louise planned a lovely trip based on our wish to see beautiful coastal walks and pretty villa..." read more
Traveled to Wales as a couple in October, 2019
A
Angelle L.
Georgia, United States
"We had a great time in Wales and the English countryside! Thank you to our local specialist, Daniel, who provided five-star service! (Excellent communicatio..." read more
Traveled to Wales as a family in June, 2019
Create your custom-made trip to Wales
Get Started