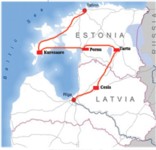 Explore the medieval towns and castle-filled countrysides of Latvia and Estonia on this nine-day itinerary. From the 13th through 16th centuries, the two countries were a unified political entity known as Livonia, and you can explore their shared culture as you travel through the historic cities, ancient river valleys, islands, and Hanseatic towns of the Baltic region.

Welcome to Riga, the capital of Latvia. Take in the blend of Gothic, medieval, and Art Nouveau architecture as you stroll through the historic streets of one of the largest cities in the Baltic. Since its founding more than 800 years ago, Riga has preserved the medieval buildings in its Old Town and Art Nouveau homes around the city, making it an architectural destination.

Start your morning in the Old Town, visiting Riga Castle on the banks of the River Daugava, along with the oldest dwellings in the city, the Three Brothers houses built between the late 1400s and mid 1600s. Stop at St. Peter's Church and climb the tower to take in an aerial view of the city; explore the ornate House of the Blackheads; and see the medieval Dome Cathedral, built in the early 1200s,

Move forward in time to the Central District, home to the grand National Opera & Ballet Theater. Visit the Freedom Monument, built to honor soldiers who fought in Latvia's War of Independence from 1918-1920 against Soviet Russia. Then make your way down Alberta, Antonijas and Elizabetes Streets to see the most magnificent Art Nouveau buildings in the city.

Hop the tram to the Central Market, which opened in 1930. The sprawling market is one of the largest covered markets in Europe, residing inside five former zeppelin airship hangars. Your guide will show you the market's highlights, including smoked meats, pickled vegetables, Latvian bread, seasonal treats, and more, before leading you to a market spot for lunch.

Continue your journey into medieval Latvia with a trip to the stunning scenery of Gauja National Park and the towns of Sigulda and Turaida to visit the ruins of the Episcopal Castle and the Castle of the Knights of the Sword.

Keep going to Cēsis, founded in 1206 and the third-oldest town in Latvia. They obtained town rights in 1323, and joined the Hanseatic League in the 14th century. The town became known as a center of arts and recreation, and is now an important national cultural and artistic center. It's also home to one of the largest preserved castle ruins and a picturesque Old Town that you're due to stroll through.

Plan your trip to Latvia
Chat with a local specialist who can help organize your trip.
Get Started

Visit the Valmiermuiža manor house, founded in 1764. More important to you than its history is what it now holds: a craft beer brewery. Take a tour to learn how the beer is brewed and sample the house specialties as you hear stories of local beers and learn about their food compatibilities.

Fully satisfied, set sail to Estonia and Tartu, its second-largest city. Take in a guided tour of the Estonian National Museum and learn about Estonia's national heritage before you take a stroll through this city of artists and intellectuals. A city tour will take you to the Town Hall square and its famous Kissing Students statue, the terracotta sculptures of St. Johns church, and Tartu University, founded in 1632.

Take an early morning drive through the Estonian forests to the swamplands of Soomaa National Park. Depending on the weather, you can make your way across by wading through the bog or taking a wooden path.

Continue onward to the coast and hop a ferry to Saaremaa, the largest Estonian island. Stop at the Kaali meteorite crater before you arrive in the island's capital city of Kuressaare.

Go to the only surviving Baltic medieval fortification that hasn't undergone significant reconstruction at the Kuressaare Episcopal castle, where you can learn about local history in the castle museum and take in panoramic views from the towers.

Travel on to the Sõrve peninsula and climb up the 170-foot (52-meter) lighthouse and lunch at the Angla Windmill Park amidst the typical Saaremaa trestle windmills and Angla Heritage Culture Center. Keep going to the Panga Cliffs, bedrock outcrops that are part of a long escarpment that starts up in Sweden's Gotland island then pass through the Baltic Sea to the Estonian western coast.

Catch an early ferry back to the mainland and drive to the petite town of Haapsalu. An ideal rest stop, Haapsalu is home to narrow streets, romantic wooden houses, and a seaside promenade. The local Bishop's Castle was founded in the mid 13th century and in use until the end of the 17th.

Continue onward to Tallinn, the capital of Estonia and your destination for the evening.

Spend a relaxed day exploring Tallinn, the medieval capital of the Baltic states. Cobblestones cover the streets, towers, and walls around the medieval-style houses of Old Town, which you can pass through to the Toompea hill. On the hill, you'll find the castle that houses the Estonian parliament alongside the Cathedral of Saint Mary the Virgin and Alexander Nevsky Cathedral. Continue on to the 15th century town hall and Europe's oldest continuously operating pharmacy in Town Hall Square.

Stop for lunch at the Maiasmokk Cafe, the oldest operation cafe in Tallinn, and check out the marzipan museum and its resident artist. Then spend the afternoon at Kadriorg Park, home to the seasonal Song and Dance festivals, Catherine's Palace, Presidential Palace and KUMU Art Museum of Estonia.

It may be departure day, but linger a bit longer in the morning with a visit to the seaplane hangars, where the Estonia Maritime Museum houses a collection of seafaring items including sail ships, boats, and naval mines. Or visit Teliskivi Creative City outside of Old Town, one of Estonia's largest creative economic enterprise centers, and enjoy a cup of coffee or pint of beer with Estonian creatives and shop for some of their unique souvenirs.

Plan your trip to Latvia

Plan your trip to Latvia

Discover Latvia, from the cobbled streets of its historic capital of...

Discover the capital cities of Lithuania, Latvia, and Estonia on this...

Explore the medieval towns and castle-filled countrysides of Latvia and...

Go back in time on this guided tour of three of Latvia's castles and...

Riga and the Midsummer Festival - 5 Days

Kimkim has selected the best Latvia travel agents so you'll have a...

Over seven days you'll cover the highlights of Latvia, from the medieval...

This trip through Latvia starts in Riga, touring the medieval Old Town,...

Explore the highlights of Latvia on this 6-day tour, starting in the...

Riga and the Midsummer Festival - 5 Days

Experience local culture and traditions in Riga by enjoying its annual...

Discover Latvia, from the cobbled streets of its historic capital of...

Annette P.
Pennsylvania, United States
"Overall we had a good trip. The private guides were all amazing! At times things felt a bit disjointed but our trip coordinator Ieva made herself available v..." read more
Traveled to Latvia as a couple in July, 2019
Create your custom-made trip to Latvia
Get Started