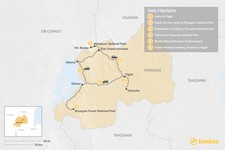 This exciting itinerary hits Rwanda's top cultural and natural sights. Try your bargaining power at a busy market, shop for local art, and visit the Kigali genocide memorial. Trek in Nyngwe Forest National Park to see reclusive chimpanzees in their natural habitat. End your journey with a visit to Volcanoes National Park to see where renowned naturalist Dian Fossey worked to protect the endangered mountain gorillas.

Welcome to Kigali! A tour representative will meet you in the airport outside of customs and transfer you to your city hotel. Check in and enjoy a well-deserved rest.

Kigali is a peaceful and thriving city, nestled against scenic hills. Visitors and locals enjoy the cleanliness, order, and hospitality that the city offers. Start your trip to Rwanda by exploring this incredible cultural city. The city is renowned for its award-winning museums, burgeoning music scene, and some of East Africa's most memorable dining experiences. Enjoy exploring some of the following sites on today's city tour.

The Nyamata Genocide Memorial is located in a former church, 18 miles (30 km) south of Kigali, and commemorates the 1994 genocide which claimed 50,000 lives. After the Rwandan Genocide began in April 1994, many Tutsi people gathered in churches to escape the violence. After 10,000 people locked themselves into the church, members of the Hutu-majority government threw grenades into the church through holes in the wall, and subsequently shot the people who remained inside, or slaughtered them with machetes. To commemorate this horrific event, much of the church has been preserved as it was—bullet holes, blood stains, and piles of clothing and identity cards, which were used to systematically target the Tutsi population, are left as reminders. Following the genocide of 70% of Rwanda's Tutsis (an estimated 50,000-1,000,000 people), the government was overthrown and 2 million Rwandans, mostly Hutus, were displaced and became refugees.

The Kigali Genocide Memorial Center is a memorial to the victims of the 1994 genocide. It is designed to commemorate the international significance of the genocide and challenge an international visitor base.

Break for lunch and enjoy a traditional African meal in one of the local restaurants, then continue the tour to Kimironko market, one of the largest in Kigali. Meet the local vegetable vendors and try your bargaining power at the fruit and succulent stands.

Visit Gahaya Gifted Hands, a training facility and marketplace where women affected by the 1994 war sell their traditional weaving and jewelry. Some of the art and handicrafts are sold overseas at stores like Macy's in the United States.  Spend some time shopping for skillfully-made handicrafts to bring home the perfect gift.

Inema Arts Center was founded in 2012 by brothers and self-taught painters Emmanuel Nkuranga and Innocent Nkurunziza to tap into the art potential in Rwanda and to use creative expression to bring the community and the country alive. It serves as a beacon in Rwanda to create exposure for Rwanda's artistic community. Shop here for souvenirs, art, traditional Rwandese crafts, and jewelry as gifts to bring home.

Located next to the Kigali International Airport, the Presidential Museum is a palace which served as home to two Rwandan presidents - Juvenal Habyarimana and Pasteur Bizimungu. It is also the location where Habyarimana's plane was shot down on its descent into Kigali in 1994. Visitors can gain insight into Rwanda's history, as well as see debris from the presidential plane.

The Camp Kigali Memorial marks the spot where ten Belgian UN peacekeepers were murdered on the first day of the 1994 genocide. Ten stone columns represent each of the fallen soldiers and the bullet-sprayed building where they were killed now houses a small exhibit on the genocide.

The Natural History Museum, also known as the Kandt House after a 19th-century German explorer, is dedicated to Rwanda's natural history and ecological richness.

The Campaign Against Genocide Museum, which opened in 2017 by President Kagame and is located in the Parliament building, aims to educate visitors about the Rwandan Patriotic Front's role in ending the violence and genocide of 1994.

After your tour of the city, head out of town to the Nyungwe Forest National Park. This biological hotspot is like something from a fairy tale—old Mahogany trees, giant ferns, orchids, and other epiphytes grow in a lush canopy. Check in to your hotel and enjoy the jungle views.

Plan your trip to Rwanda
Chat with a local specialist who can help organize your trip.
Get Started

Nyungwe Forest National Park is a famous destination with visitors hoping for a visit with some of the park's 13 species of primates. The treks to see a chimpanzee group are especially popular. Starting from the lodge at 4:00 A.M. you will hike deep into the forest with a guide to find the chimp family. Once located, visitors are allowed one hour to view the animals before returning to the lodge. The dense forest can make seeing the chimps difficult but their playfulness, curiosity, and human-like characteristics make the long trek worthwhile.

Return to the lodge for lunch and a visit to the Gisakura tea estate in the afternoon.

Transfer to Volcanoes National Park and break for lunch at the hotel. In the afternoon you will visit the Dian Fossey Museum, dedicated to the American naturalist who made protecting the mountain gorillas her life's work. Hike from the trailhead at the research station to see the cabin where she was murdered in 1985, as well as the nearby grave where she is buried alongside 20 of her beloved mountain gorillas. The hike takes approximately 1.5 hours and requires a medium level of fitness to navigate the forested slopes. Keep your eyes open on the way for forest hogs, elephants, and a variety of primates and bird species. Return to the lodge for dinner.

Today is another early morning with a 5:00 A.M start for a hike to Mt. Bisoke, an active volcano. The hike to the top will take you half a day, so bring a packed lunch and comfortable hiking boots. Return to the lodge in the afternoon and relax after a hard day.

Start your morning with a 6:00 A.M. breakfast before heading out for your hike at 8:00 A.M. There are two habituated groups of Golden Monkeys that live in the park at the foot of Mt. Sabyinyo, and visitors are permitted one hour to spend with the monkey troop.

Return to the lodge for lunch and transfer to Kigali for your departing flight. Safe travels!

Kimkim has selected the best Rwanda travel agents so you'll have a...

Liz S.
Australia
"Agnes was excellent at helping me plan my trip to Rwanda. She was helpful in answering my questions regarding which country to see the gorillas and provided..." read more
Traveled to Rwanda solo in September, 2018
Create your custom-made trip to Rwanda
Get Started