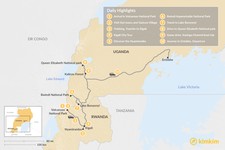 This adventurous itinerary checks off two of Rwanda and Uganda's top national parks. Trek with gorillas and golden monkeys, see art and historical sites in Kigali and visit a rural village to learn about traditional life. End your journey with a trip to Queen Elizabeth National Park to see Africa's largest game—elephants, hippos, crocodiles, and possibly the elusive African leopard.

A representative from the travel company will meet you upon your arrival at the Uganda-Rwanda border. Meet with your driver and guide who will transfer you to your lodging in Volcanoes National Park.

In the morning, visit the Ibyi Iwacu Cultural Village, which relies on tourism to support itself. Many of the locals are former poachers who now share their traditional rural culture and livelihoods and educate visitors. You will get to tour the village with a local, hear local songs, see different traditional dances, prepare food with a family, and visit a healer and the king's palace.

After lunch at the lodge, visit the Gastura village, which offers similar opportunities to learn from the local culture.

Start your morning with a 6:00 A.M. breakfast before heading out for your hike at 8:00 A.M. There are two habituated groups of Golden Monkeys that live in the park at the foot of Mt. Sabyinyo, and visitors are permitted one hour to spend with the monkey troop.

Return to the lodge for lunch and transfer to Kigali. Check in to your hotel and enjoy a relaxing dinner.

Plan your trip to Rwanda
Customize your trip with help from a local travel specialist.
Plan Your Trip

Kigali is a peaceful and thriving city, nestled against scenic hills. Visitors and locals enjoy the cleanliness, order, and hospitality that the city offers. End your trip to Rwanda by exploring this incredible cultural city. The city is renowned for its award-winning museums, burgeoning music scene, and some of East Africa's most memorable dining experiences. Enjoy exploring some of the following sites on today's city tour.

The Nyamata Genocide Memorial is located in a former church, 18 miles (30 km) south of Kigali, and commemorates the 1994 genocide which claimed 50,000 lives. After the Rwandan Genocide began in April 1994, many Tutsi people gathered in churches to escape the violence. After 10,000 people locked themselves into the church, members of the Hutu-majority government threw grenades into the church through holes in the wall, and subsequently shot the people who remained inside, or slaughtered them with machetes. To commemorate this horrific event, much of the church has been preserved as it was—bullet holes, blood stains, and piles of clothing and identity cards, which were used to systematically target the Tutsi population, are left as reminders. Following the genocide of 70% of Rwanda's Tutsis (an estimated 50,000-1,000,000 people), the government was overthrown and 2 million Rwandans, mostly Hutus, were displaced and became refugees.

The Kigali Genocide Memorial Center is a memorial to the victims of the 1994 genocide. It is designed to commemorate the international significance of the genocide and challenge an international visitor base.

Break for lunch and enjoy a traditional African meal in one of the local restaurants, then continue the tour to Kimironko market, one of the largest in Kigali. Meet the local vegetable vendors and try your bargaining power at the fruit and succulent stands.

Inema Arts Center was founded in 2012 by brothers and self-taught painters Emmanuel Nkuranga and Innocent Nkurunziza to tap into the art potential in Rwanda and to use creative expression to bring the community and the country alive. It serves as a beacon in Rwanda to create exposure for Rwanda's artistic community. Shop here for souvenirs, art, traditional Rwandese crafts, and jewelry as gifts to bring home.

Located next to the Kigali International Airport, the Presidential Museum is a palace which served as home to two Rwandan presidents - Juvenal Habyarimana and Pasteur Bizimungu. It is also the location where Habyarimana's plane was shot down on its descent into Kigali in 1994. Visitors can gain insight into Rwanda's history, as well as see debris from the presidential plane.

Gahaya Gifted Hands is a training facility and marketplace which was created to economically empower Rwandan women following the 1994 genocide. After hundreds of thousands of widowed and orphaned women and girls were left as sole providers for their families, sisters Joy Ndunguste and Janet Nkubana recognized the opportunity to use traditional Rwandan weaving as a means of generating an income for the women. Visitors enjoy shopping the skillfully-made handicrafts to bring home the perfect gift.

Spend the day discovering the Nyamirambo neighborhood. The walking tour begins at the Women's Center with a traditional snack and a quick Kinyarwanda language lesson, as well as an introduction to the center and its activities. Continue to Nyamirambo, one of Kigali's oldest neighborhoods. Along the way, the guide will lead you into a women's hairdressing salon and a tailor shop to feel local fabrics, into a family compound to mound cassava leaves, by two mosques, and up to a lookout view over Kigali.

Later in the day, transfer to the Azizi community to learn about its role in the community. Started as a Christian non-profit food relief program, the community has expanded to include opportunities for entrepreneurs and artisans to expand their businesses internationally.

After the tour drive to the Rwanda-Uganda border to meet your Ugandan guide, who will transfer you to the Bwindi Impenetrable National Park. This UNESCO Natural World Heritage Site is one of the most biologically rich areas of the world. Bwindi's most revered species are 350 Mountain Gorillas, who make up just over half of the world's population.

Start your day with a hearty breakfast, as you will be trekking for 3-6 hours today to see mountain gorillas. A reasonable degree of fitness, as well as a sturdy pair of boots, are required for today's hike.  After registering with the Uganda Wildlife Authority ranger station by 8:00 A.M., head out through the village gardens and into the jungle. The rangers will escort you through the thick bush, occasionally clearing away dense undergrowth as you search for the gorillas. For their own safety, the gorillas are under 24-hour monitoring, so you are almost guaranteed to see them.

The population of gorillas is slowly increasing, but the species remains critically endangered. Gorillas and humans share nearly identical genetic material and the transmission of disease, via food or proximity to humans, could be lethal. To avoid this you will be required to maintain a distance of at least 23 ft (7 m) from the animals.

Once the ranger has located the gorilla family you will be allowed to approach, leaving your belongings to one side. The guides will interpret the animals' behavior and explain their habits to you. You will see females and their young, young males, and possibly even a dominant silverback as they eat, play, interact with each other, or just sleep. After an hour with the gorillas, return to base.

Early in the morning head out into the forest for a several-hour trek into the center of the Bwindi Impenetrable Park. In 1992 the forest gained National Park and World Heritage Status to protect the remaining 350 endangered mountain gorillas within its boundaries. As a result, the local Batwa people were evicted from the park, becoming refugees. To combat the poverty that accompanied this change, a Batwa Developmental Program was created to generate income and provide tools for farming. You will join them for a "Batwa Experience" to learn about their traditional way of life.

Return to the lodge for a late lunch and transfer to Lake Bunyonyi in Kibale.

Today you will head toward Queen Elizabeth National Park via Kasese, set on the floor of the Rift Valley. The peaks of the Rwenzori Mountains will be behind you as you drive toward the park.

The landscape of northern Queen Elizabeth Park is comprised of dozens of ancient craters carved into the gently rolling hills. Centrally-located Kazinga Channel is home to a large number of large mammals, including hippos, elephants, and buffalo, as well as over 600 bird species—more than any other national park in Uganda.

After a hearty breakfast get an early start for today's trekking tour. Head to the Kalinzo Forest at the edge of the park to start your trek into the forest to see the chimpanzee troop. After your trek, return back to the lodge to prepare for the afternoon.

After a relaxing lunch, continue the day's adventure with a water safari on the Kazinga Channel. Your guides from the Uganda Wildlife Authority will expertly identify the channel's bird and wildlife species for you. Keep your eyes open for African Skimmers, Great White Pelicans, Spoonbills, and a number of Bee-eater species. You will see hippos, massive Nile crocodiles, and elephants on this stretch of river.

In the evening embark on an evening game drive to see the area's well-known lion pride, who prey on the area's large Uganda Antelope population. If you're lucky you may see a Giant Forest Hog —Africa's largest pig—or an elusive leopard.

After an early morning, start the long journey to Entebbe. Your guide will transfer you to the airport in time for your outbound flight. Safe travels!

This 5-day safari trip is an ideal introduction to Rwanda's wildlife,...

Kimkim has selected the best Rwanda travel agents so you'll have a...

Liz S.
Australia
"Agnes was excellent at helping me plan my trip to Rwanda. She was helpful in answering my questions regarding which country to see the gorillas and provided..." read more
Traveled to Rwanda solo in September, 2018
Plan your trip to Rwanda
Customize your trip with help from a local travel specialist
Plan Your Trip