Vietnam is one of the most intriguing destinations in Southeast Asia, with its sublime mix of tropical coast, remote farming villages, and cities filled with culinary delights and historical significance. Learn about the nation’s harrowing past in Ho Chi Minh City, eat your way through Hoi An, or cruise through the panoramic jewel of Halong Bay with this roundup of highlights and itinerary ideas.

Times have changed since the north and south of Vietnam was reunited, but scars can be found at every turn; for the cuisine, enchanting landscapes and prosperity of modern Vietnam cannot mask the fact that a brutal war had torn this nation apart not too long ago. However, this tragic history is often a part of the reason for which you might be visiting Southeast Asia and regard; the Chu Chi tunnels or other remnants of the war are sure to leave you mesmerized. 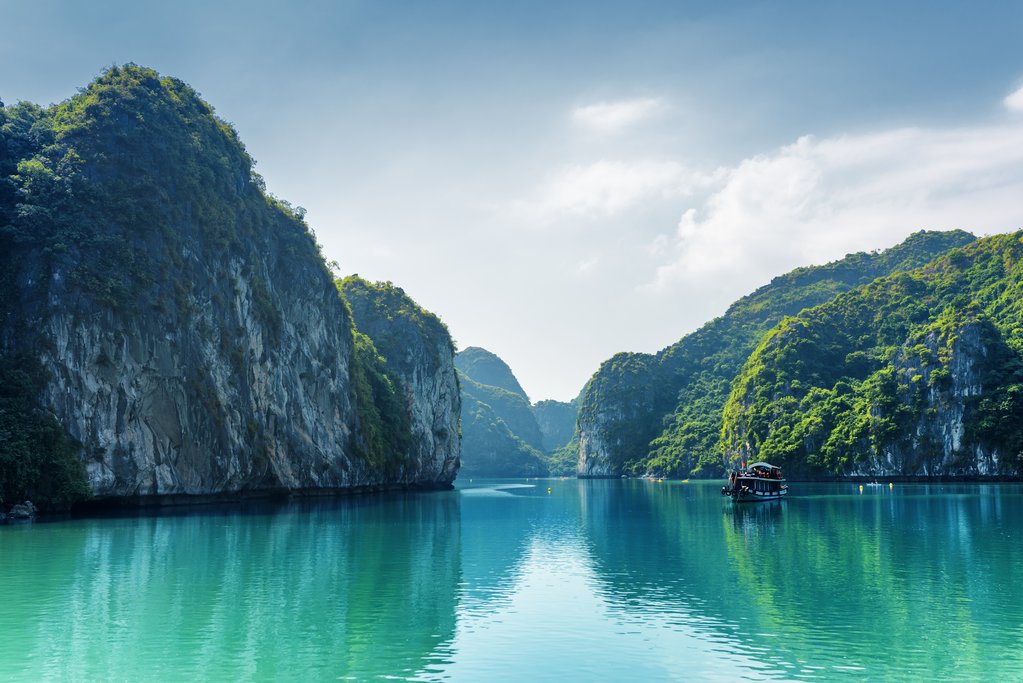 Located in the Gulf of Tonkin, hundreds of karst limestone rock formations are covered with tropical forest in Halong Bay, arguably the most popular attraction and top travel destination in Vietnam.

The word “Halong” has a direct translation to “descending dragon” and ancient stories suggest that a dragon was once the protector of the Vietnamese who lived in this area, attacking any intruder with fire breathing and giant emeralds. Although an urban myth, it is said that these giant stones are still protecting Halong Bay from the bottom of the emerald color waters and to really experience this beautiful place, you should take a boat cruise on the bay.

In fact, this is one attraction in Vietnam which is just as impressive as its reputation, and you can fully expect to find breath-taking scenery amidst the mangroves, caves and the colorful coral beneath the shiny surface of the ocean. Known as a UNESCO World Heritage Site, visitors arrive in Halong Bay to explore this stunning region by boat and the awe-inspiring scenery never fails to live up to even the highest of expectations.

See all the classic highlights on this nine-day trip, including a cruise on Ha Long Bay and a hike to villages and terraced rice paddies in the countryside.

Mekong Delta: Floating Markets & Wildlife Along the "River of 9 Dragons" 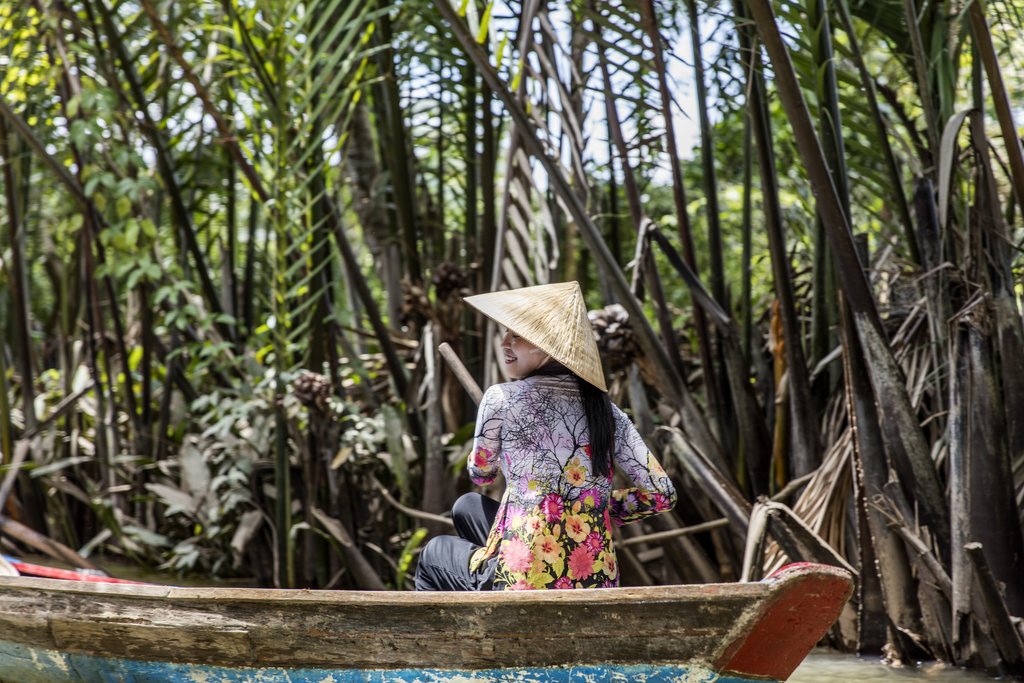 The Mekong River runs through six nations in Southeast Asia, and the Vietnamese people have lived next to this formidable river for over four thousand years. Also known as the “River of the Nine Dragons”, it is here you can find the colorful locals living by very traditional and cultural means.

Featuring the infamous floating markets with all manner of products such as tea and noodles to snakes, baskets and entire farms, the Mekong Delta is also a vibrant place to be, and somewhere you can gain a great insight into both rural and traditional living in Vietnam. Winding your way through river banks teeming with birdlife, bugs and larger reptile, the Mekong is certainly a place that comes to life the further along this river you travel. Luscious, mystical and inhabited with wild buffalo in between idyllic villages and rice paddy fields, this powerful river is one of the true highlights of visiting Vietnam.

This 12-day Vietnam highlights tour features a day of cycling along the Mekong Delta. Ride your bike under a green canopy of coconut palms, exploring the orchards and daily life of the local farmers. You'll also cruise, kayak, and swim in Halong Bay, visit culinary hotspot Hoi An, and spend time in historical Hanoi and Ho Chi Minh City.

Sapa and Dalat: Terraced Fields & Villages of the Mountain Regions 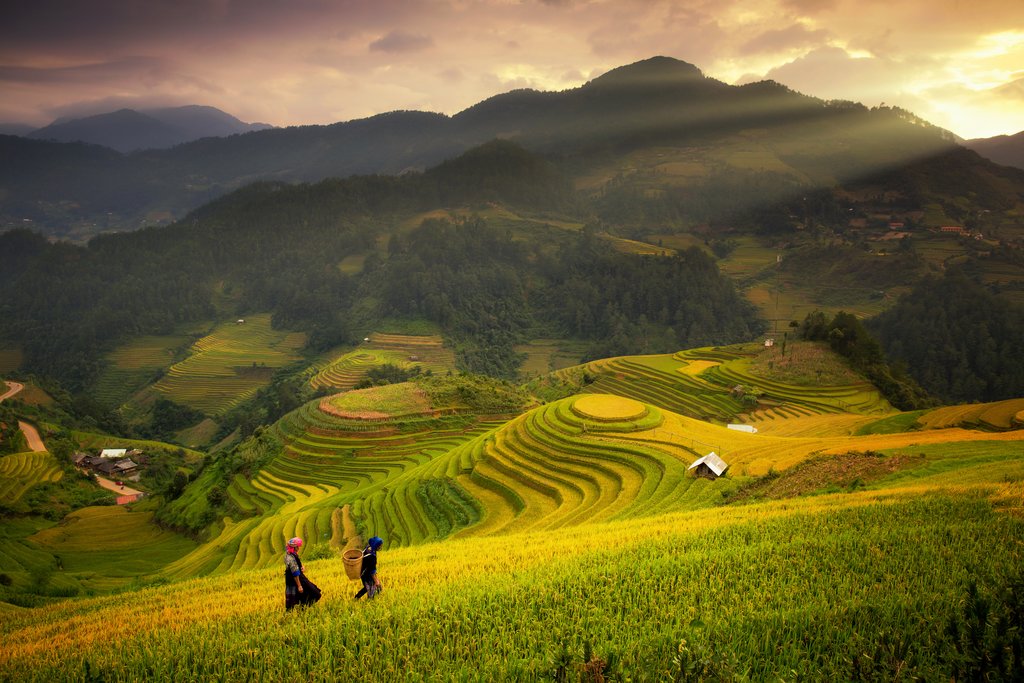 Primitive and isolated, these destinations still practice centuries-old lifestyles, and it is here you can sample some of the staple foods including dumplings and bamboo rice which they locals still cook to this day. That being said, it is really the countryside which makes locations like Sapa and Dalat so popular, for the unassuming villages, smiling children, unspoiled landscapes and remoteness of these regions is often the best way to uncover the quieter side of Vietnam, without the crowds and far from the busy cities.

Experience Sapa on this 8-day trekking itinerary along the Vietnam-China border. You'll hike through terraced rice fields and farming villages, spend the night in homestays with local families, and enjoy views of Mt. Fansipan, the highest mountain in Vietnam. 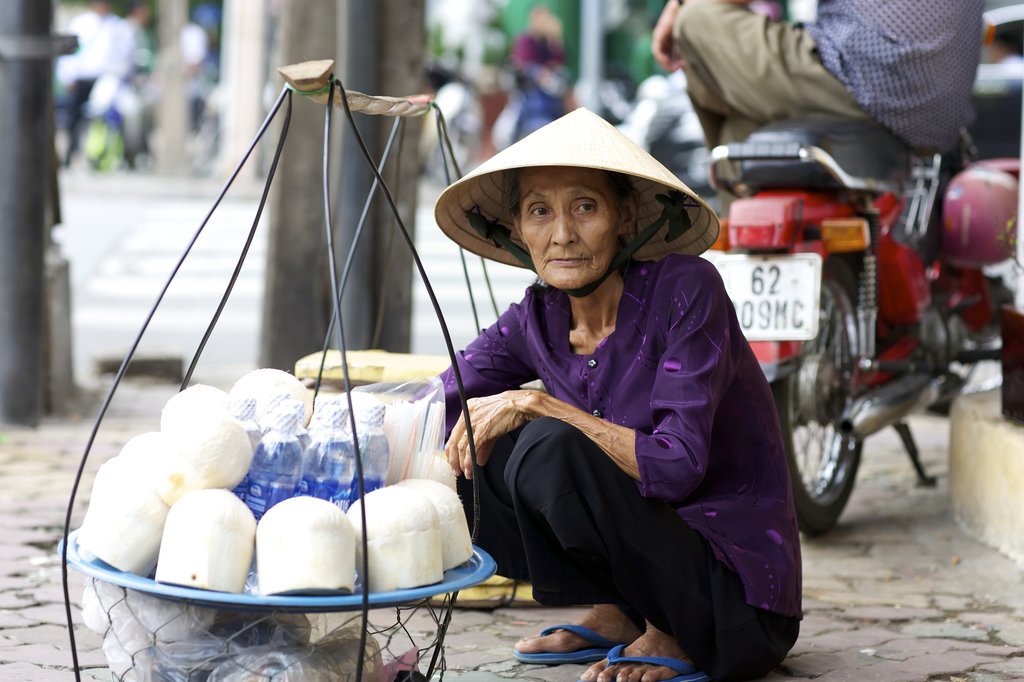 Many cities in Vietnam are popular, most notably Hanoi in the very north, but there is nowhere quite like Ho Chi Minh City. Rising from the ashes and breaking away from the tragic history for which it is best known, this city is a breathing microcosm of everything you will find in modern-day Vietnam.

Home to some of the best street food in Southeast Asia, art galleries, craft stores, and a vibrant coffee culture; Ho Chi Minh is a fast-moving city with a wealth of culture beneath the surface to uncover. And this variety is evidenced throughout the city, from fashion-conscious teens and trendy designer stores to hidden bars, racing scooters, flash cars, and human-powered carts. Life is fast in Ho Chi Minh, but it’s always easy to escape the busy streets by taking day tours to nearby attractions such as the Chu Chi tunnels or the above mentioned Mekong Delta.

This two-week tour starts in Ho Chi Minh City, where you'll have a guided walking tour and see the city at night on the back of a vintage Vespa. Cycle through traditional villages, hike Vietnam's national parks, explore the grand architecture in Hoi An and Hue, and cruise around mesmerizing Halong Bay, ending in Hanoi.

Hoi An: Culinary Hotspot on the Bon River 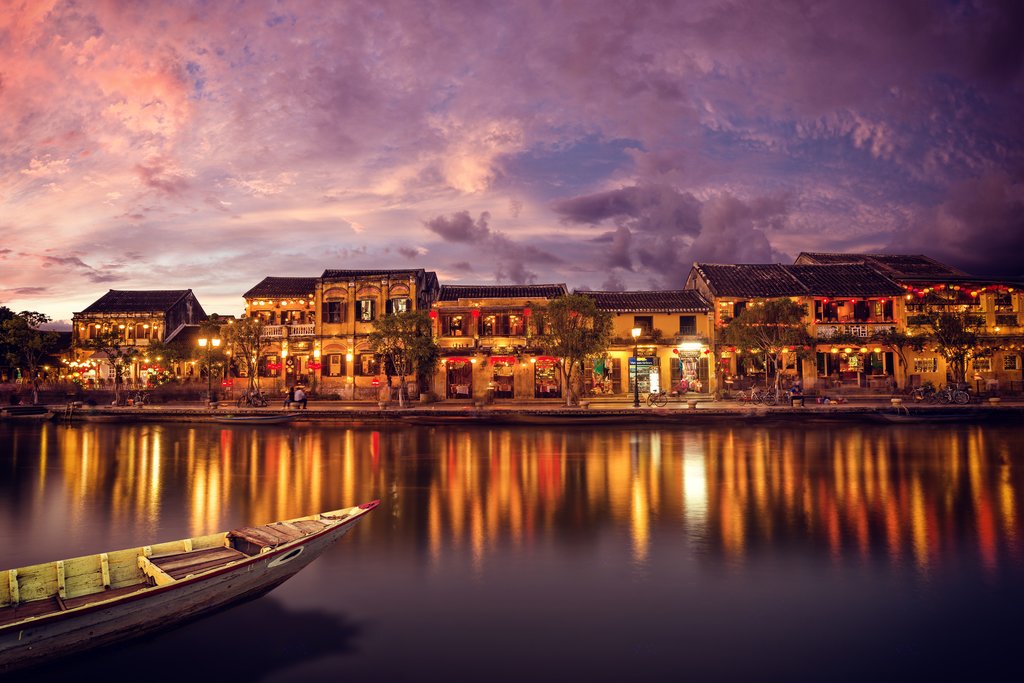 Hoi An is ideal for anyone yearning to experience a quieter alternative to the busy resorts in Na Thrang and Da Nang, where this small port offers a very cultural encounter. Located on the Bon River and once the focal point of trade in Asia, you will find a very old world in Hoi An and one of the most colorful and ancient towns in the entirety of Southeast Asia.

In fact, little has changed in this small port town since the arrival of merchants from Japan and China with small craft shops and tailors lining the narrow streets, interspersed by cafés and quaint eateries. Food is always a highlight from pork noodles to steamed prawns while the busy markets are a stark contrast to the silence alongside the river itself. Incredibly, Hoi An is now an unspoiled experience where you can witness a primitive town where the remnants of an ancient world are still present in modern times.

This 14-day tour takes you around the major highlights of Vietnam, including three nights in Hoi An—but along the lesser-traveled paths. Visit the coastal regions of Northern Vietnam that still remain unknown to many visitors. Get immersed in Vietnamese history in Hue. And of course, visit bustling Hanoi, the capital of Vietnam, which seamlessly blends the old and new.

Vietnam is a long, skinny country bookended by extremes: the northern...

Vietnam is one of the most intriguing destinations in Southeast Asia,...

Make the Most of Your Time in Vietnam

How Many Days to Spend in Vietnam

When plotting your grand adventure in Vietnam, try to visit both the...

Turn a brief five-day vacation to northern Vietnam into an unforgettable...

Make your travel plans wisely to get the most out of a week in Vietnam....

For a relatively small country, Vietnam offers something for everyone,...

With two weeks, you can travel the length of Vietnam plus add Cambodia...
Make the Most of Your Time in Vietnam

See all the classic highlights on this nine-day trip to magical Vietnam....

Vietnam is a culturally and geographically diverse country, which you'll...

This tour takes you around the major highlights of Vietnam, but along...
Vietnam Tours & Itineraries

Vietnam in January is perfect, as the country has stepped out of the hot...

February is a great month to travel in Vietnam, with mostly gorgeous...

By April, Vietnam’s spring peak season is drawing to a close. Prices...

Vietnam in May: Travel Tips, Weather, and More

May is a transition month between spring and summer, with a good deal of...
Vietnam Travel Advice

Kimkim has selected the best Vietnam travel agents so you'll have a...

Central Vietnam is still at its rainiest. But this is one of the best...

The skies finally clear in North Vietnam in October, and the summer...

Travel Vietnam's coast from north to south and discover mostly...

Embark on an unforgettable journey to see the best of Vietnam, from...

This 11-day adventure covers the highlights of Vietnam from north to...

Travel back through the centuries on a history and culture tour of the...

Experience recent and ancient history on a nine-day tour of southern and...

How to Get to Sapa

How to Get from Hoi An to Halong Bay

How to Get from Ho Chi Minh City to Can Tho

How to Get from Hanoi to Ninh Binh

How to Get to Ba Be National Park

Located in Bắc Kạn province, Ba Be National Park is around 150 miles...

How to Get from Hanoi to Pu Luong Nature Reserve

The ecotourism destination of Pu Luong Nature Reserve is 95 miles (145...

How to Get to Mekong River Delta

The Mekong River Delta in southern Vietnam is one of the most...

How to Get from Hanoi to Bai Tu Long Bay

If you're looking to explore the under-the-radar cousin of Vietnam's...

How to Get from Hue to Halong Bay

How to Get from Hanoi to Halong Bay

If you're looking to make the 108-mile (174 km) journey from Hanoi to...
Getting Around Vietnam

J
Jeremie L.
Luxembourg
"Great experience overall, from A to Z (with both KimKim and our local specialist from Realistic Asia). Before the trip: I have to say, I was not comfo..." read more
Traveled to Vietnam as a couple in November, 2022

Joyce H.
Ohio, United States
"We enjoyed our hotels and guides very much. Every guide and driver was timely, which can be a real worry when you are traveling in a country where you don't ..." read more
Traveled to Vietnam as a couple in November, 2022

Polly N.
Australia
"The trip was great. It was easy to plan and Ashley was very prompt in making the changes we asked for. We had a few hiccups along the way which Ashley sorted..." read more
Traveled to Vietnam as a couple in October, 2022

Jillian M.
Mississippi, United States
"Huyen did an amazing job planning our trip. It was incredibly affordable considering everything we were able to do. She connected us with highly qualified dr..." read more
Traveled to Vietnam as a couple in September, 2022

Piers J.
United Kingdom
"Well thought out travel itinerary with lots of variety, a few minor mistakes in the detail, however the organisation, the tour guides and the activities were..." read more
Traveled to Vietnam as a family in September, 2022

Christine B.
Arizona, United States
"We had an amazing trip to Vietnam! Long was an incredible help with planning our trip - he listened to our feedback, made adjustments quickly, and checked in..." read more
Traveled to Vietnam as a group in September, 2022
Create your custom-made trip to Vietnam
Get Started