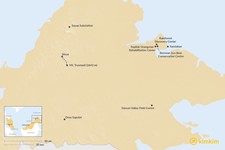 Sabah is a rich microcosm of authentic culture, incredible wildlife, awe-inspiring natural wonder, and endless adventure that together make this Malaysian state a true gem of Borneo. Some lesser-known experiences and off-the-beaten-trails throughout Sabah are a must-see to truly embrace the beauty and diversity of this idyllic tropical destination.

Since its founding in 1986, the Danum Valley Field Center (DVFC) has become a leading research station in Southeast Asia. The facility supports scientists in rainforest ecology and is fully equipped with labs, living quarters, campgrounds and a cafeteria. The center was not originally designed for tourism but over the years it has opened its doors to naturalists, wildlife enthusiasts, and independent travelers. Don't come expecting a luxury resort — the main purpose of the facility is science!

You will be paired up with an in-house nature guide during the duration of your stay. The DVFC guides are expert in spotting wildlife and have deep knowledge of the rainforest. A number of activities are available at DVFC. You can climb to a tree-hide to observe early morning wildlife, cool off in the river or catch the sunrise from Bukit Atur, a nearby mountain. There are excellent hiking opportunities, including night hikes for spotting nocturnal animals.

Venturing into the lesser-known Sapulot in Central Sabah means encountering the hospitality of the local Murut people — drinking rice wine from huge ceramic jars while learning local traditions. The Murut people were the last of the ethnic groups in Sabah to renounce headhunting. There will be opportunities to sample traditional Murut food.

Climbing limestone pinnacles, cave exploration, or hiking to hidden waterfalls are a few of the adventurous activities available. Other options include navigating traditional longboats down rivers amid pristine rainforest. It's even possible to raft across the border to Kalimantan, where you can visit sleepy villages and longhouses. After a long day of adventuring deep in the heart of Borneo, you can relax at your jungle camp, napping in a hammock perched over a riverbank.

Sapulot is tucked inland from the coast and is one of Sabah's best-kept secrets, with wonderful, nature, local culture and traditional villages. Not many venture here, but if you do, you are unlikely to see another tourist or traveler.

The Sayap Substation, located on edge of Kinabalu National Park, is surrounded by vast montane forests in a temperate climate with an abundance of biodiversity. The primary rainforest — at an elevation of 1,080 meters above sea — is home to giant trees, waterfalls and an abundance of orchids.

The ranger outpost is located along a beautiful mountain river with camping spots nearby. An extensive network of trails near the substation allows you to endlessly explore the cloudy forests covering many different habitats. Kinabalu National Park is a Unesco designated World Heritage Site, known as one of the world's most important biological areas. The area is home to 4,500 species of flora and fauna, including 326 bird and around 100 mammal species, and over 110 land snail species.

One of the most popular destinations in Malaysian Borneo, the Sepilok Orangutan Rehabilitation Center is was founded in 1964 to rehabilitate young orangutans held captivity or displaced by deforestation. A visit to the center will leave you in awe of Borneo's famous great ape.

After a visit to the Orangutan center, make sure to visit the equally impressive Bornean Sun Bear Conservation Centre (BSBCC). The diminutive Bornean sun bear builds nests in trees for sleeping but does not hibernate. They are very active in the daytime, you're likely to see them playing or snacking on coconuts.

Another main attraction in the area is the Rainforest Discovery Center, located in the Kabili Sepilok Forest Reserve. The center features a 347-meter steel canopy walk, plus an extensive network of discovery trails on the forest floor below.

From Sepilok, it's a 30-minute drive on to Sandakan, Sabah’s second largest city. The city was once a strategic port, where coffee tobacco, sago, oil, and timber exited Borneo for overseas markets. The economy has shifted and most people make a living through fishing, shipbuilding, and tourism. Attractions in the town include:

The second-highest peak in Sabah is Mount Trus Madi, located in the 1,400 square kilometer Crocker Range Park. A visit to the mountain will reward you with beautiful views as you hike to the summit from the village of Sinua. The mountain is home to an abundance of birds, orchids, and nepenthes (tropical pitcher plants). The area receives few tourists so you feel as if you have it all to yourself.

Plan your trip to Malaysia

Plan your trip to Malaysia

Sabah is a rich microcosm of authentic culture, incredible wildlife,...

To experience Sabah as the locals do requires expert insight. Our Sabah...

Love adventure, nature, and getting off the beaten track? If so, this...

This Borneo adventure is full of off-the-beaten-track experiences in...

Climb the imposing Mt. Trusmadi while still covering the natural and...

Discover Sarawak: Off the Beaten Path in Malaysian Borneo...

From the Deer and Lang Caves to trekking the limestone formations of the...
Malaysia Tours & Itineraries

Love adventure, nature, and getting off the beaten track? If so, this...

This Borneo adventure is full of off-the-beaten-track experiences in...

Sabah is a rich microcosm of authentic culture, incredible wildlife,...

Climb the imposing Mt. Trusmadi while still covering the natural and...

Discover Sarawak: Off the Beaten Path in Malaysian Borneo...

From the Deer and Lang Caves to trekking the limestone formations of the...

Discover Sabah: Off the Beaten Path in Malaysian Borneo -...

Sabah is an area rich with culture, astonishing wildlife, incredible...

On this 22-day adventure, you will cross Malaysian Borneo. You'll start...

Culture & Nature in Malaysian Borneo: From Kuching to San...

This 14-day journey takes you deep into the heart of Malaysian Borneo....

A
Alison W.
United Kingdom
"An unbelievable trip of a lifetime. Through Kimkim, Sticky Rice we’re able to put together a truly unique experience. Although some details weren’t exactly..." read more
Traveled to Malaysia solo in July, 2018
Plan your trip to Malaysia
Customize your trip with help from a local travel specialist
Plan Your Trip