The Balkan region is compact, meaning some areas allow for easy day trips into neighboring countries. This is certainly the case for Croatia and Bosnia and Herzegovina, two countries that share a lot of history but remain distinct in culture. From southern Croatia, it's an easy day trip to the historically and culturally rich city of Mostar.

Mostar is situated in the Herzegovina region and features the emerald Neretva River running through its middle. You may recognize Mostar's iconic bridge Stari Most ("Old Bridge"), a 16th-century Ottoman bridge. Although it was destroyed during the Croat-Bosniak War, it was reconstructed to its former glory in 2004.

Mostar's entire Old Town was severely damaged in the war, but efforts to rebuild it were valiant, and today stands charming, quaint alleyways filled with shops and markets. You'll find plenty of restaurants featuring traditional Balkan food, cafes with Bosnian coffee, and copper artisans selling their crafts. You can also visit the Old Bridge Museum and learn about the area's turbulent history, watch the famous bridge-jumpers dive into the chilly river below, or simply wander through the streets to soak up the culture.

Other highlights of Mostar include hiking or driving to the Merdzan Glava Fortress or visiting the mosques, including Karađoz Beg Mosque and Koski Mehmed Pasha Mosque. You can also visit a traditional Ottoman home (Biscevic House) and stop to swim at Kravica Waterfall on your way back to Croatia. 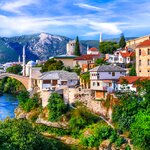 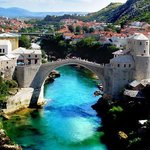 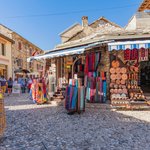 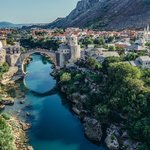 Itineraries with Day Trip to Mostar

Explore the highlights of Croatia as you cross the country starting in the Istrian Peninsula in the north and working your way down the Dalmatian Coast to the "Adriatic Pearl", Dubrovnik. Along the way, you will explore ancient Roman ruins, medieval fortressed towns, and beautiful national parks. You will also bike, hike, kayak, and zip-line on this tour that highlights both adventure and cultural discovery.

Explore the northwestern Balkans in this trip that combines nature with historic cities, starting in Slovenia with a tour of its capital Ljubljana, as well as visits to Lake Bled, Lake Bohinj, and the country's Karst Region. Discover the beauty of Croatia by visiting Plitvice Lakes National Park, as well as the ancient Old Towns of Split's Diocletian Palace and Dubrovnik's walled fortress. Enjoy day trips to Mostar and Kravice Waterfalls in Bosnia and Herzegovina, plus Perast and Kotor in Montenegro.

The first Croatian national park (and the most popular), Plitvice Lakes...